Gramercy Capital is a REIT that manages CDO’s: those structured asset-backed securities that played a large role in the subprime mortgage crisis. While doing some reading I found this – in hindsight – great quote on CDO risks in a document from 2004:

These include “low financial transparency, informational asymmetries (which create the potential for unanticipated, incorrectly priced and poorly managed concentrations of risk), and the possible promotion of new forms of moral hazard within the banking system as the linkage between origination and management of credit risk becomes more attenuated.”

If just the CDO abbreviation alone is not already enough to turn investors away, some key statistics from Yahoo Finance:

Those numbers look spectacularly bad, but the company is restructuring and all debt is non-recourse. The company consists of three parts: the parent, the realty division and the finance division. The company is in the process of getting rid of the realty division, and it released 7 December the pro forma condensed consolidated financial statements. They will continue to manage the realty division, and get a small management fee for doing so (10M/year). The finance division contains the CDO’s, and while the book value is negative they do produce cash flow for the parent company and since the debt is non-recourse this does have a positive value (more about this later)

Finally we have the parent company that does have a decent amount of assets. It has 80M in real estate 155M in cash and some other assets for a total value of 260M. Total liabilities are 40M, and they do have 88M in preferred shares outstanding so that would give us a total value of 132M for the common equity, or 2.61$/share. It’s not quite a net-net with the current share price at 2.80, but it should certainly be enough to provide an reasonable amount of downside protection.

The big question is: how much value do the CDO assets have? The company receives a small management fee (7M/year) for managing the assets in the CDO’s, but the true value can be found in the equity that the company has in the CDO’s. If the minimum interest coverage and asset overcollateralization covenants are met all excess cashflow that remains after paying the more senior bond holders in the CDO structure goes towards the parent company. Currently the 2005 CDO is failing the overcollateralization test by a small margin, while the 2006 CDO is barely passing. The 2007 CDO is hopelessly undercollateralized and is probably never going to generate a significant cashflow unless the commercial real estate market recovers.

The cash flow from the CDO’s can be very significant, the 2005 and 2006 CDO’s, will yield around 50M this year. This is a big number compared to the 140M market cap of the company, but these cash flows are far from certain. The company in the latest 10Q:

I’m not really comfortable valuing a cash flow that is so unpredictable and has such a thin margin of safety. Indaba Capital Management, a small hedge fund that has a big position in the preferreds, values the cash flow with a multiple between 2x and 4x giving the finance division a value between 73 and 180M and the common equity of the company a value between 204 and 359M. 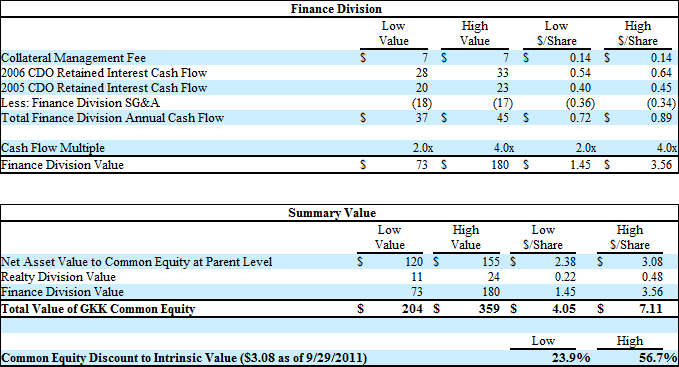 Compared with a 140M market cap right now there certainly seems to be a good amount of upside, and the downside is well protected thanks to the assets at the parent level. The problem is that the future cash flows are very uncertain: buying GKK should probably be viewed as buying a very cheap option on the performance of the CDO’s.

If the CDO’s fall completely out of compliance the finance division probably starts making ~11M in losses/year (18M in SG&A minus 7M management fee). The realty division should be making roughly 6M/year, so in a worst case scenario the company will probably start losing some money, but nothing big.

An alternative is to invest in the preferred stock, but the company has not paid dividends on the preferred stock since December 31, 2008. The preferreds have a par value of 25$, a 8.125% interest rate, and have accrued 6.60$ in unpaid dividends. Giving the current liquidity position of the parent company you do have to ask why they haven’t resumed paying a dividend. With 155M in cash at the parent level they could easily pay those dividends worth ~23M, and that’s exactly why Indaba Capital Management is pushing the company to reinstate the dividend:

Despite such ample liquidity, the Company has not paid the accrued quarterly dividends on the Preferred Stock pursuant to the terms of such Preferred Stock for three years, which as discussed above, will total approximately $21.5 million as of September 30, 2011. We note that the Company also declared in its Quarterly Report on Form 10-Q filed on November 8, 2010 that it did not know when or if it will pay future dividends, including accumulated and unpaid dividends on the Preferred Stock. This declaration was in language identical to the statement in its 2010 Form 10-K which was filed on September 23, 2011 except that, in its November 8, 2010 filing, such statement was prefaced with “[g]iven our current financial condition” (emphasis added). It comes as no surprise to us that the Company did not include such explanatory language in its recently released 2010 Form 10-K given that the current financial condition of the Company is substantially improved from its condition in November 2010. We believe the Company is now sufficiently restructured and capitalized to pay all of the accrued but unpaid dividends on the Preferred Stock. According to our above estimates, such accrued but unpaid dividends represent only approximately 10% to 13% of the Company’s cash holdings.

The question is of course how successful they will be. If we let the actions of the management speak there is little reason to believe that they are planning to reinstate the dividend. And while the dividends are cumulative, no interest is paid on the accrued dividend so the preferreds are becoming an increasingly cheaper source of funding for the company (instead of 8.125% they are now effectively paying ~6.4%, and that rate will only go down – and this is at the expense of the preferred holders). On the other hand why would management want to screw over the preferred holders by withholding the dividend? The lack of a dividend is almost certainly also depressing the value of the common.

The company also can’t continue to not paying the preferreds. The company is a REIT and is by law required to distribute taxable income as dividends, and it can only pay dividends if the preferreds are paid. The company is posting positive earnings for the past nine months, but I’m not sure when they actually have to start paying taxes. They did of course suffer big losses in the past, and those can probably be used to delay paying tax.

When I initially read the case for GKK at Whopper Investments I thought that it was a pretty good idea, but reading and thinking about it more I’m not so sure anymore. What do you think?