Meade is an extremely tiny company with a 3.88M market cap that specializes in manufacturing telescopes, binoculars and other optical products. The company was mentioned yesterday at Barel Karsan; and it’s attraction is the balance sheet: it’s currently trading at a 63% discount to net current assets. Some key statistics:

The earnings that the company report are a bit too pessimistic. They are in the process of writing down goodwill, and the depreciation of property and equipment is also keeping the reported earnings down. At the moment they have almost completely written this down, while no significant capex is planned for the near future. That said: the company is still destroying value. Since the company is not paying dividends or expanding we can simply look at the NCAV/share to get a good idea on the value creation or destruction at the company. 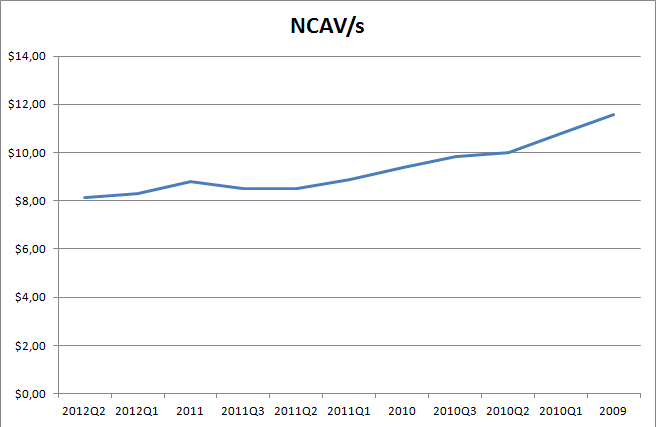 If management manages to turn the business around or quickly liquidates the company there is probably a lot of value in MEAD. It might happen, and yes they are in the meantime not destroying value at an alarming pace, but at the same time it’s mostly wishful thinking. There is not a cash flow positive business hiding behind the numbers, or a historical profitable business that’s just having a bad year. At the same time; there should probably be a number were buying MEAD makes sense. What do you think?