Salem Communications is the largest commercial US radio broadcasting company that provides programming targeted at audiences interested in Christian and family-themed radio content. The company owns 95 different radio stations all over the US, and also generates revenue with internet sites, books and magazines with a Christian theme. The company attracted my attention because according to a VIC write-up it has a FCF yield of 35%, and that’s worth investigating. Some statistics from Yahoo finance:

The company is very leveraged, and while it is trading at a significant discount to book value, that discount doesn’t directly offer a margin of safety. Almost all the assets that the company owns are broadcast licenses, and there are all kinds of FFC regulations with regards to buying and selling. The value of the licenses is also related to the income the company is able to generate, and if that drops, the value of these assets would drop just as fast. Combine that with the leverage, and it’s easy to see how the equity can go to zero.

The company has been reducing leverage the past five years, reducing the amount of outstanding debt from 361M in 2006 to 277M at the latest quarter. Unfortunately for the company they had to refinance their debt in 2009 at unfavorable terms (300M of notes @ 9.625%, and at a slight discount to par). The result of this is that the interest expense increased from 20M in 2009 to 30M in 2010. Since then the company has been paying down debt, and currently has 246M of the 9.625% notes outstanding and 31M on “The Revolver” credit facility that has a lower interest rate (3.73%). This means that the company needs to pay a little bit less than 25M in interest with the current debt load.

So the big question is: how easy can the company service this debt load, and how stable are the earnings? The earnings aren’t very stable: the company reported losses in 2008 and 2009 because it wrote down intangible assets (the broadcast licenses), but the underlying cashflow that is generated by the business is remarkable stable if we believe this company presentation. Adjusted EBITDA numbers from 2004 till 2011 vary between 52M and 58M. Strangely enough the company doesn’t disclose how it is exactly calculated, while they do use it in various documents (not in the 10K/Q’s), but usually Adjusted EBITDA is something along the lines of results from continuing operations minus stock based compensation. Charlie Munger called EBITDA bullshit earnings, so wonder what he would think of Adjusted EBITDA…

I have spend some time thinking what would be a reasonable way to calculate the earning potential of the company, and thought that taking net cash provided by continuing operating activities, subtracting capital expenditures and subtracting amortization related to bond issue costs and bank loan fees would be appropriate. This last item is a very real and recurring economic cost because the company needs to refinance every few years. I have created the table below with some key financial statistics. Adj. EBITDA is how I would calculate it by adding back D&A to Operating Income, and the row below shows what the company reported. Not included in this picture are the costs of stock based compensation. 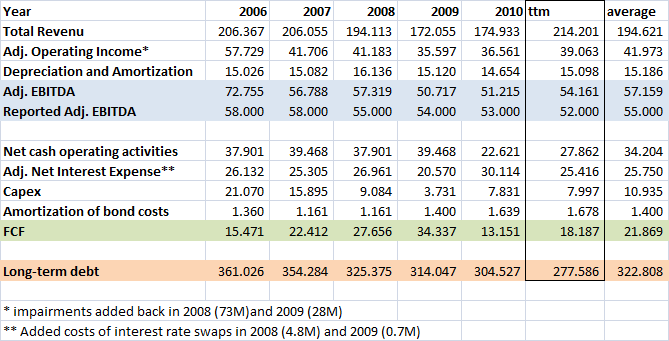 So it seems that the company is indeed able to generate significant cash flows compared to the market cap. 18M in cash flow on a 64M market cap would translate to a 28% yield, and with the deleveraging of the company the free cash flow is growing thanks to reduced interest payments. A return half of that would probably be more reasonable, so that would imply that the equity should be worth twice the current price.

An alternative method to look at SALM is to imagine how the balance sheet could look like at the end of 2016 when they need to refinance. I’am assuming that the cash flow stays as it is, and it would mostly be used to pay down debt. The first assumption is in my opinion reasonable: it’s below the historic average and while new technologies are invading the radio space, the numbers of radio listeners have actually been growing every year, and the internet part of the business is growing fast. The second assumption is not reasonable, because they historically have used significant amounts of cash flow to buy new radio stations, buy back shares or pay dividends (they paid 4.8M in dividends in 2010). The alternatives don’t have to be a bad allocation of capital.

In the first year the company would be generating 18M in cashflow, and with the debt of the company trading at 108% of par they would be able to buy back 16.7M of debt: resulting in an additional cash flow of 1.6M a year due to reduced interest. Compound this 5 years long and the company would have 187M in debt left and be generating 26M in cashflow/year. If a 12.5% FCF yield would be fair that would imply an equity value of 208M, more than a triple compared to the current market cap.

But when the company would arrive at this point in time they would most likely be able to refinance at a significant lower interest rate: the debt is already trading above par. If they manage to reduce the interest rate from 9.625% to, for example, 7% that would shave an additional 5M off the interest expenses, and translate to 31M in FCF and a potential equity value of 248M. The company has a lot of leverage, but when things would develop favourably, gains can be huge. It also works in the opposite direction…

Insider ownership of SALM is very high. The CEO and chairman own combined 56% of the company, and because of a dual class share structure they have even more voting power. The shares traded on the Nasdaq are the Class A shares with 18.7M shares outstanding while the 5.5M Class B shares have 10x the voting rights per share. High insider ownership can be a problem, but being a co-owner with management that has a long term business view is actually a good thing. The current chairman of the board, Stuart W. Epperson, started his first radio station in 1961 and joined a partnership with the current CEO, Edward G Atsinger III, in 1972, and the company IPO’ed in 1999. They also have a history of paying dividends and buying back shares, and I also liked to read that they aggressively cut costs in the beginning of 2007, including suspending the management bonus program and reducing the base salary for employees by 5% and management pay with 10%.

SALM risky, and is maybe better viewed as an option since there is a lot of leverage, but I think that at the current prices the risk/reward ratio is very favorable. The company managed to survive the financial crisis, has pretty stable cash flows, is getting less risky every quarter, and the FCF yield is very high. Management also seems to be acting with long term share holder interests in mind.

I’m not going to make this a huge position in my portfolio, and I’m certainly not going to put too much companies with high leverage in my portfolio since that would introduce systematic risk, but I do like a cheap option. On a scale from 1 to 10 I give the stock a 8.