Solitron Devices is a tiny semiconductor company with a 7M market cap that manufactures components such as transistors and voltage regulators. Most components are custom made and sold to companies related to the US defense and aerospace industries. The company has been posting reasonable solid results the past 10 years: the last loss was in 2002, and margins have been improving gradually ever since. Even though Solitron is profitable, it’s currently trading for less than the cash on it’s balance sheet. Some quick stats from Yahoo Finance:

Just looking at the above key ratios it’s obvious that Solitron is cheap. It’s PE ratio is low even if we ignore all the cash on the balance sheet, and if we include the cash you have a profitable company that you get for less than free (ok, almost: outstanding options are not included in the stats above, diluted you get $2.98/share in cash). Everything is cheap for a reason though, and Solitron has some ugly things in it’s past while the future for a company that’s tied to the defense industry is probably also not too bright.

Liabilities (and assets) from the past

Solitron entered bankruptcy in 1992 because a factory of the company burned down, and that was enough to push the, at that moment, debt loaded company in bankruptcy. The current company was a part of the old Solitron that emerged from bankruptcy, but not without liabilities. The company has a settlement agreement with the USEPA that requires the following payments for environmental liabilities:

The company is also required to make quarterly payments to holders of unsecured claims on the old Solitron with the following terms:

This debt is carried on the balance sheet at face value, but it is obviously worth a lot less: it’s basically an interest free obligation that requires minimal principal payments. It would take the company 36 years to pay down the debt, and if you would for example assume a 5% discount rate the NPV of the debt would be around $450K. So the balance sheet of the company is actually a bit better than visible at first sight.

Because of it’s history the company also has a big tax asset that is carried at zero on the companies book, but it’s big enough to avoid paying any significant amount of taxes from now till 2029:

The past also explains why Solitron has been building up cash on the balance sheet. As part of the settlement with the USEPA the company agreed to not pay out any dividends. The last required payment to the USEPA is at the end of fiscal year 2013, so this could act as a potential catalyst in the not so far away future.

The Company has not paid any dividends since emerging from bankruptcy and the Company does not contemplate declaring dividends in the foreseeable future. Pursuant to the Company’s ability to pay its settlement proposal with USEPA, the Company agreed not to pay dividends on any shares of capital stock until the settlement amount for environmental liabilities is agreed upon and paid in full.

For valuation purposes most of the points above are not very relevant. The company has been paying low taxes for years, and the money that is spent on the bankruptcy and environment liabilities are also already part of the historical results, and not that big to begin with anyway. So simply throwing a multiple on average historical earnings or cash flow should work fine to get an estimate for the intrinsic value of the operating business. If everything else would remain the same you would expect that future performance should be slightly better than past performance because the amount of money that the company needs to spend on environmental liabilities is decreasing. I have put some key financial statistics in the spreadsheet below: 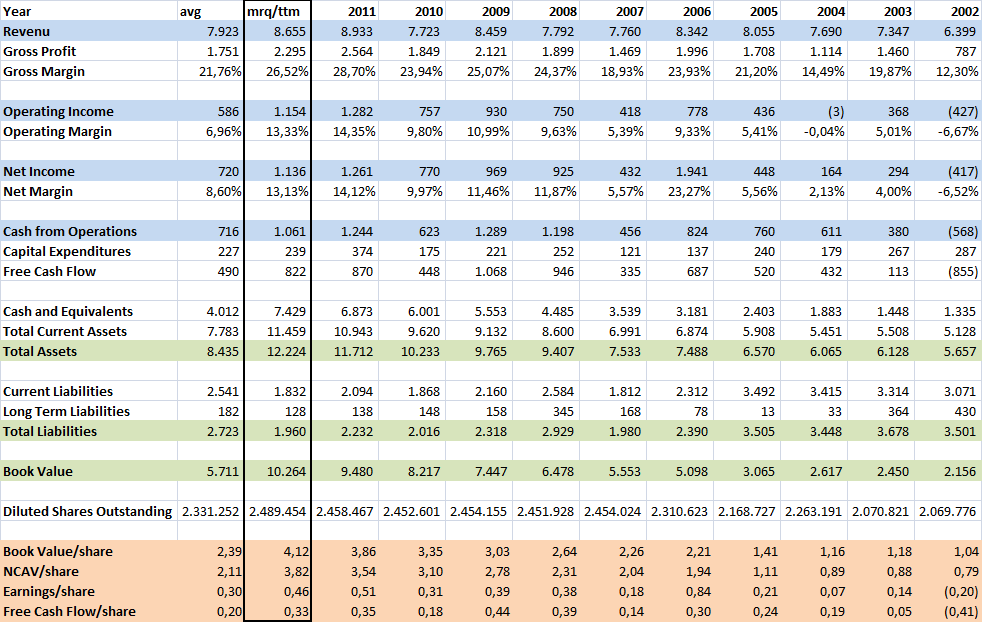 Whether or not a no-growth assumption is the right one is of course a good question. If you look at historical results you would say that it’s pessimistic, but if you take in account that defense spending is going down in the US it could also be optimistic. In it’s latest quarterly report the company for example writes that the backlog of orders decreased with 20% compared to the same period previous year while the level of new bookings decreased with 48%. So no reason for optimism.

The part about the competition in the latest 10K is also worth reading. The company manufactures custom made components that adhere to military specifications, and because of this it does have a bit of a niche market with less competition. At the same time the Defense Department is pushing the use of cheaper commercial off the shelf components that will reduce the potential market. A silver lining is that major competitors have elected to withdraw from the military market, and it would be my guess that this is one factor that is driving the increase in margins. With big players such as Motorola and Fairchild Semiconductor leaving Solitron should be gaining some pricing power.

The CEO owns 28.7% of the company while other insiders own an insignificant amount of shares. There has been no buying or selling by insiders, something that’s in my mind always a bit worrying. Because if the company is really cheap you would expect that the people that have the most inside business knowledge to be the first to buy. The company does employ a stock option plan (in general not a big fan of this, I don’t like to get diluted, and as visible in the spreadsheet above the share count is on the rise). The bonus that the CEO gets when pre-tax income exceeds $250,000 is in my mind a more sensible incentive. As a percentage of revenues the company spends a relative high amount on CEO pay, and while I would prefer to see something else, I think it’s also almost unavoidable with a company this size.

As is the case with most, if not all, companies on this blog Solitron Devices is not the greatest business in the world. But adjusting for the cash balance the business is basically free, and since there is no sign of value destruction at the company it has at least to be worth something. While the history farther back in the past is ugly, the remaining liabilities and risks related to the bankruptcy and the environmental damages are small and not a big reason to discount the business value.

There is also a catalyst on the horizon since the company should manage to fulfill it’s obligations towards the USEPA in 2013, making it possible to do something productive with the cash on the balance sheet.

On a scale from 1 to 10 I give the stock an 8: Solitron’s future is uncertain, but at current prices the company is trading as if it’s worthless and there is even a potential catalyst.

Oddball Stocks has an excellent three part (part one, two & three) series on Solitron written nine months ago when the company was trading at a slightly higher price with less cash on the balance sheet.