Origen Financial manages a portfolio of manufactured housing loans and asset backed securities (ABS). The company delisted in 2008 and is in liquidation mode since. It sold the loan originating and servicing business and is now only managing seven separate trusts that were created between 2004 and 2007 and hold housing loans. The trusts have debt that is non recourse to the parent company. Because some trusts are performing well while others have suffered substantial losses the consolidated balance sheet is useless to evaluate the available asset value, creating a potential opportunity.

As already explained Origin Financial holds interests in seven different trusts. The trusts are separate entities that have non-recourse debt. While some trusts are performing and producing cash flow to the parent company other trusts are underwater and are probably never going to produce any cash flow. The cash flow from these trusts is one way traffic: it can only flow from the trust to Origen Financial, not the other way around.

Each trust started with several layers of debt and a pool of loans with a face value higher than the total amount of debt. To take the 2004-A trust as an example: this one started with $200M in debt that was backed by $239M in face value of contracts with an average contract rate of ~10%. The debt is sliced in several layers. The most senior layer has the lowest interest rate, but it does have the highest rating because when loans default these defaults are first absorbed by the excess amount of collateral and then by the more junior debt levels.

Origen Financial doesn’t own the debt of the trusts (with one small exception) but the remaining equity, so to get cash the interest on the notes needs to get paid first and certain targets need to be met. Most importantly there needs to be an amount of excess collateral available before distributions to Origen Financial can be made. Since all defaults are absorbed by the overcollateral the difference between the interest paid to the debt and the interest received on the total loan pool has to be big enough to absorb these defaults. The equity interest in the trust is leveraged to the default rate of the underlying contracts, and when it’s spikes any excess overcollateral can be wiped out easily. This is exactly what happened with the 2006 and 2007 trusts.

All the trusts start liquidating as soon as they are created. Loans get repaid, default or reach maturity and when this happens the note holders of the trust get repaid as well (starting with the most senior notes). To take the 2004-A trust again as example: it started with $200M in debt and $239M in contract face value, and at the moment $55.7M in debt is remaining and $81.3M of contract face value. When the amount of debt is dropping the amount of overcollateralization that is required is also dropping. The trust started with an overcollateralization target of $42.8M, and the target is now $25.6M. With the target dropping the excess money can be distributed freely to Origen.

So to summarize there are two sources of value:

To determine the value of the interests that Origen has in the trusts the amount of overcollateralization is a dirty shortcut to get some idea of the available value. The 2004-A, 2004-B and 2005-A trust have a total of $62.5M in excess collateral, but this is understating the value of these trusts. For the past three years these trusts all have produced cash flow in excess of the return of overcollateral. This basically means that the current default rate is lower than the delta between the rate paid to the ABS note holders and the rate that the underlying assets are paying. The table below summarizes the performance data from the three performing trusts.

As is visible the amount of required overcollateral dropped by a total of $9.2M the past twelve months while a total of $11.7M was distributed to Origen. So taking the total overcollateralization for these trusts as the total asset value is too pessimistic. At the same time it’s too optimistic for the 2005-B trust. This trust has significant OC ($15.4M), but here defaults have been eating away at the excess collateral for the past years. The graph below shows the OC target, the actual OC and the delta between them. 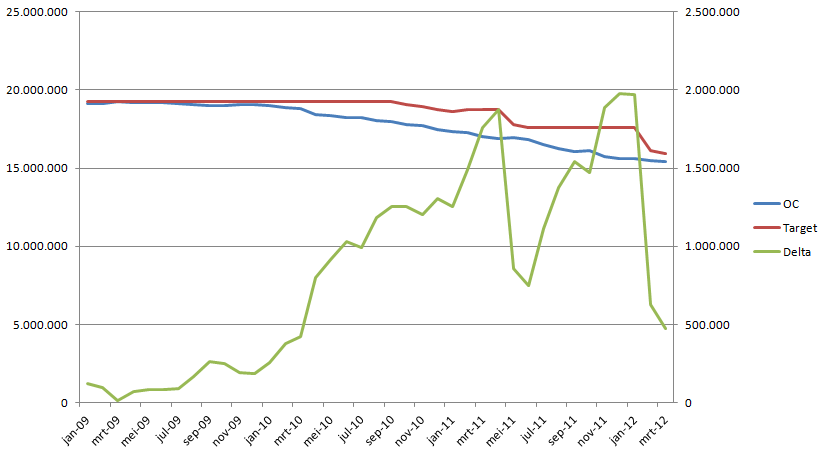 As is visible the trust is very close to meeting it’s OC target, but so far the available amount of OC is dropping at a nearly identical rate as the target. If this trend continues the trust would have at the end of it’s life no OC available, and it would not have produced any cash flows to Origen. It’s highly likely that this trust does have some value, but it’s almost certainly a lot less than the current amount of OC available. Usually the default risk decreases when the portfolio ages because at the end you keep the people that have been paying you back for years, and at the same time the loan to value ratio is on average going down because principal payments get made.

Answering the question how much value this trust has is very hard. Not only do you need to estimate how much of the overcollateralization is actually excess collateral and will be returned to Origen, the timing of these payments also matter a lot if you want to determine the current value. A scenario where the trust would start to create some cash flow this year would be way more favorable than a scenario where the cash only starts flowing after 5 years. I’m going to take the easy and conservative option and simply ignore any potential value this trust could have.

While we have determined that the value of the assets is significantly above the $62.5M that it has in excess collateral in the three oldest trusts this does not complete the valuation story. Equally important is the timing of the cash flows, and this is the second key part of the thesis. All notes have optional redemption clauses that make it possible for the servicer to buy the contracts from the trust and repay the notes at par when less than 20% of the debt remains outstanding. The graph below shows the amount of debt outstanding for the 2004-A trust, and the optional redemption threshold: 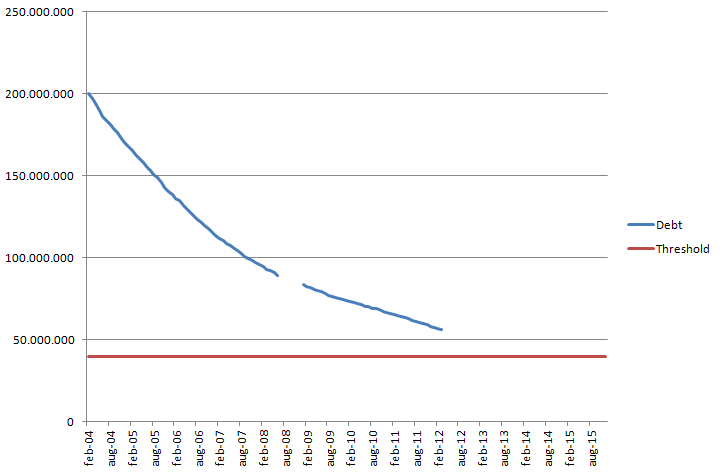 Just by looking at the graph it should be clear that the optional redemption threshold is probably going to be reached somewhere in 2014, maybe 2015. And while it’s called an optional redemption, I think you can be confident that it’s going to be used, since the prospectus states that when the servicer fails to exercise his purchase option an auction process is started to sell the trust assets at the highest possible price. But that’s probably not necessary since the trust holds loans that pay around 10%, so buying the assets and retiring the remaining debt at par should be an attractive transaction in the current low-rate interest environment. The story is roughly the same for the 2004-B en 2005-A trusts: these should reach the thresholds a bit later, probably somewhere in 2015. When this happens the remaining OC is returned to Origen Financial.

To complete the valuation we have to make some rough estimates about the cash flows and the timing. Since that’s not easy I’m going to take a very simplistic and very pessimistic scenario and show that even in this case the NPV of the assets is higher than the current market capitalization of the company. Assumptions in this case:

If you would throw this in Excel you will get a NPV of $42M while the current market capitalization is $36M. This scenario is especially pessimistic because in reality a lot of cash would be returned earlier, although it’s hard to model this exactly. In 2011 $11.3M in cash flow was generated while $10.9M was distributed to shareholders. You should probably asume that this amount shrinks slowly every year going forward, until the redemption thresholds are reached.

At the same time this valuation ignores the overhead costs of the Origen Financial entity itself. These should be around $2M a year, but the excess interest received above the return of OC should easily be able to cover these costs ($2.5M was received the past year). Another minor source of value is the fact that the company holds $3.5M in notes: probably the B2 notes in the 2005-B trust since these have exactly $3.5M in face value outstanding. These notes have a 7.2% yield and are protected by 15.4M in OC, so these should probably be at least worth par (and should add $0.14/share in value).

The company delisted in 2008 and is only publishing financial statements since, so I don’t know how much insiders exactly own today. In the 2008 annual report insiders and directors as a group owned 37.2% of the company. More interesting is the Succes Fee Letter Agreement with the CEO that gives him incentive to work towards liquidating the company since he will be paid a 1% bonus based on the value of a liquidity transaction.

A little bit of history

Origen Financial got in trouble in 2007 in the height of the financial crisis. It had to sell the loans it owned at large losses (before creating an ABS trust it needs to own a bunch of loans first), it required a rescue loan, and it sold the loan originating and servicing business. At the moment the company doesn’t have any debt at the parent level anymore, and it started distributing liquidation payments in 2010. Origen paid $2.6M in 2010, $10.9M in 2011 and $3.9M has been paid so far in 2012. So this shows that liquidation payments are at the moment occurring at a rapid rate.

The valuation work in this write-up has been crude for assets this complicated, but I think it’s sufficient to show that the asset value behind the Origen Financial is not only significantly more than the current market cap, there is also a strong catalyst in a few years time when the trusts reach the ‘optional’ redemption thresholds. At the same time management has shown that it is willing to liquidate the company and return capital.

While I do think Origen Financial is a compelling opportunity, it’s not without risks, and I wouldn’t want to buy a huge position. There is a lot of leverage at work, although that’s partly offset by the fact that money extracted from the trusts can never flow back.