Previous month Nate at Oddball Stocks took a look at Conduril, a construction firm located in Portugal. Just based on this last piece of information you would expect a company that has had a tough couple of years and a poor future. While it is trading as this is true – it’s a net-net –  the company has actually shown strong returns on equity and it has a healthy order book to keep it going in the future. Some other ingredients in the story are the fact that it’s family owned and that the majority of their business is not derived from Portugal, but from Africa. Enough reasons for me to take a closer look.

The company has a €39.6M market cap based on a €22.00 share price. It’s listed on an unregulated segment of the Easynext Lisbon stock exchange (technically a MTF), and while it’s far from the smallest company I have looked at it’s probably the most illiquid one based on how often it trades. There is decent liquidity at the €22.00 ask price though: someone is trying to sell a ‘big’ position.

To get a better picture of the historical performance of the company I have created a small spreadsheet with some key statistics for the past six years. Older annual reports are not available on the companies website. I noticed that in newer annual reports the data from previous reports was often restated. Also a bit weird is that the company reported EPS in 2011 without subtracting minority interests, and in 2010 it reported EPS numbers using the wrong share count. Wonder how you can get that wrong? The table below is based on the restated information (EUR ‘000). 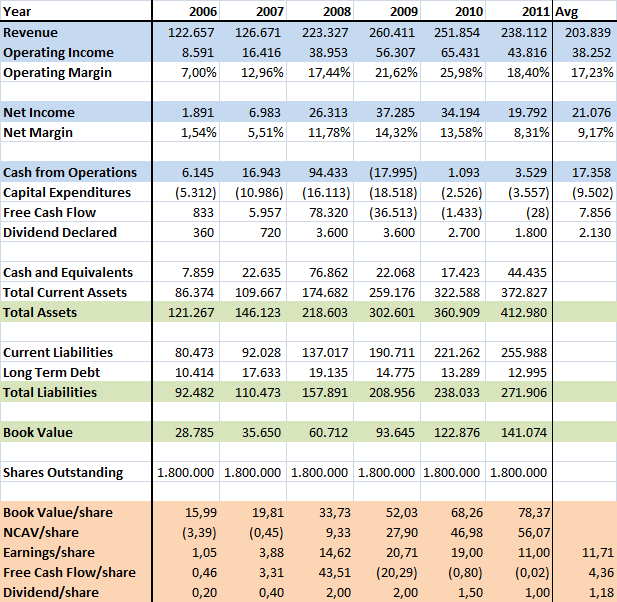 Looking at the data above you wouldn’t guess that we are looking at a Portuguese company in the middle of a recession/debt crisis. Conduril managed to grow book value between 2006 and 2011 at a more than excellent 37% CAGR, and even in 2011 it managed a 15% return on equity. At the same time: if we look at the free cash flow or the cash the company is generating from operations it doesn’t seem impressive. Footnote 11.4 in the latest annual report illustrates why this is the case:

Conduril is in the business of building railroads, bridges, harbors and other projects that take multiple years to complete. It uses the percentage of completion method of accounting: while building a project income is recognized based on how far along the project is, but the timing of the cash flows can be quite different. Based on the relative small advances received amount and the high amount of costs incurred it seems that clients pay the majority only after the project is completed.

With this knowledge looking at the cash from operations line can still be deceptive: it looks like the cash flows Conduril receives are extremely lumpy: huge in 2008 but not much in the other years. This is not the case: the company is growing fast and a lot of cash is disappearing in growing the working capital. I also think that at the same time the company is already paying taxes on the reported income while it hasn’t received the cash yet. The graph below should clarify the picture: 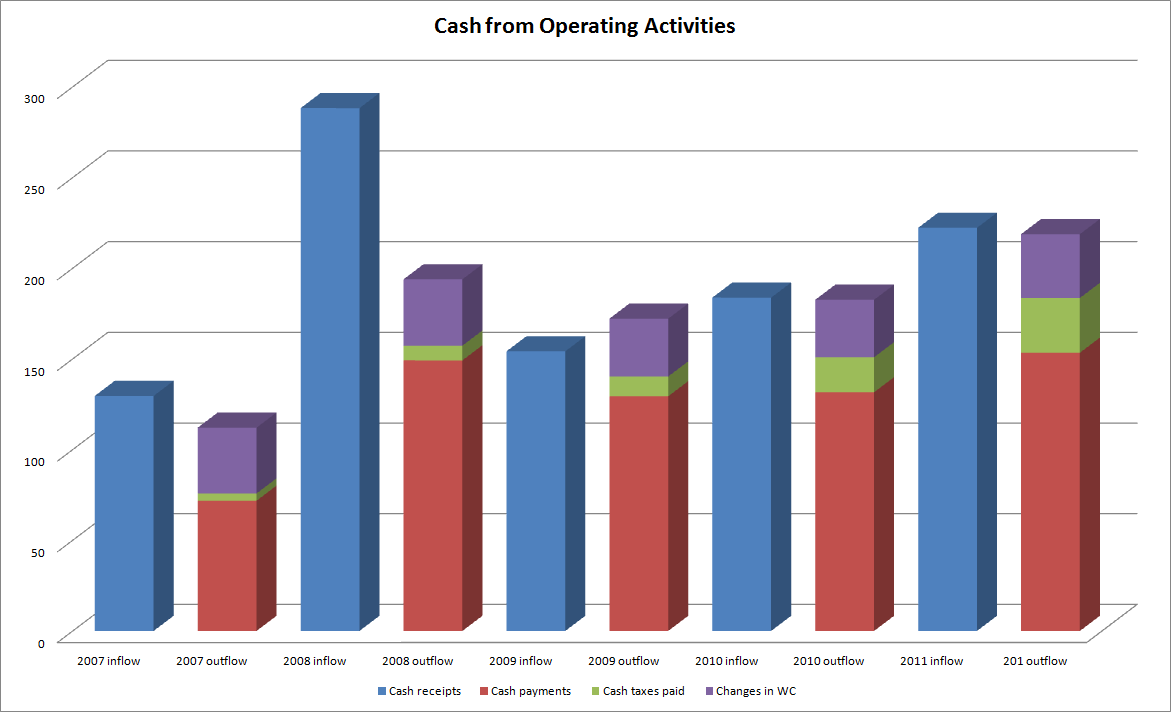 Because of how Conduril operates and it’s growth the past years most of it’s book value sits on the balance sheet as accounts receivable. Total current assets are 372M and 260M of this number are accounts receivable from clients. So how valuable Conduril is depends for a large part on how successful they will be in collecting the receivables in the future. In the latest annual report the company wrote:

Notwithstanding the delay in payments by our clients and the increased limitations in access to credit, the Group’s performance was positive.

Despite this they have recognized just €3.5M bad debts out of a €273M total. A decent amount of Conduril’s customers are presumably (local?) governments, so it is not that likely that customers will default. That said: Spain, Portugal, Angola, Mozambique and Botswana are obviously also not the most creditworthy countries. Unfortunately the company provides few details on who the customers exactly are and where they are located. We only know that this year 36% of sales were domestic and 64% was foreign while in 2010 the ratio was 20% domestic and 80% foreign. So most of the credit exposure is in Africa. Guess that is good these days.

Because the company employs leverage it could be a big problem if customers default. The company has little debt: 13M in long term debt, and 38M in short term debt while it has 44M in cash for a slight negative net cash position. It does however have a lot of non interest bearing liabilities. If the 260M account receivables would be discounted by 10% book value would drop 18% from €78/share to €64/share while NCAV would drop with 26% from €56/share to €42/share. So a big customer defaulting could probably have a pretty disastrous effect.

Based on historical performance the company is really cheap, and it actually seems that the future is also not looking bad. Conduril writes the following about their outlook:

The value of projects in the order book has reached EUR 600 million. The contracting of new construction projects is forecast to fall in Portugal, although we are optimistic about good results in the African market, especially in Angola, where a big increase in the number of tenders is expected, driven forward by the electoral calendar.

For 2012 a favourable evolution is expected in the concessions we take part in, as well as the High-Speed Alcántara-Garrovillas Railway Line, and a growth in cash flows in the group is also expected as a result of the management policies applied. Work has started to constitute a branch in Cape Verde, given the local legal requirements and the reinforcement of our activity in that country.

They have an order book that is good for roughly three years of revenues, and while the outlook for their home market is not good, most of their revenue is already coming from a handful of countries in Africa. Expected is that the economies in these countries will grow nicely in real terms the coming years, and Conduril is positioned to take advantage of this development. The outlook with respect to the cash flow next year is also good: as a shareholder I want to see cash in the bank.

You might noticed that so far I haven’t even attempted to calculate what a fair value for Conduril is, and think an accurate valuation is difficult. I don’t even know who their biggest customer is and how big they are, let alone know what kind of impact it would have on Conduril if they would default. What’s the recovery rate on a (partly) finished road or bridge anyway? What about a liquidity crisis if customers delay payments?

I don’t think a scenario where work simply dries up in Portugal and Spain is bad. They slowly collect the current outstanding receivables, and who cares about a possible drop in revenues if it would mean they can indeed convert their current assets to cash?

While it is hard to value Conduril you could invert and ask yourself what kind of assumptions should you make if you assume the current price is correct? Broadly speaking, I think there are three possible outcomes possible:

Lets assume that the positive scenario isn’t a possibility, what kind of probability should the severely negative scenario have to make the current price ‘right’? That easy: it’s the same 60% as today’s discount to NCAV. That seems overly pessimistic to me, especially since I think that the third scenario has a decent probability as well.

Conduril was founded a bit more than 50 years ago and was bought in 1970 by the current major shareholders: the Amorim Martins family. The chairman of the board owns the largest part of the company with a 32% stake and as a group insiders own 47% of the outstanding shares. The latest annual report also shows a couple of shareholders who have a >10% position in the company, and looking at some older annual reports they seem to be long term holders of the company. That probably explains the lack of liquidity.

I like to see insiders own a fairly large stake in the company because this should align my interests to a decent degree with those of insiders. The annual report discloses that total remuneration of ‘key management personnel’ is ~€1.1M and as visible in the table in the beginning of the write-up: the number of outstanding shares has remained constant, so there are no options that dilute outsiders. So this looks pretty good to me.

I also like that they are paying a dividend. Not because now I’m getting paid a 4.5% yield (unfortunately taxed at 25%) to see how the future unfolds, but mainly because I like to see that management is willing to return money to shareholders.

It’s hard to pinpoint what the value of Conduril exactly is, but I do think you can spot something cheap when you see it. Conduril is trading at a ~70% discount to book value, a ~60% discount to net current asset value and a 2x PE-ratio. And while there are certainly risks Conduril also has a lot of good things going for it: exposure to emerging markets, a filled order book, high historical returns on equity and management is a major co-owner that seems to get paid a reasonable salary.

One thing that also attracts me to this investment is the simple fact that the PIGS have been dominating headlines in a negative way for years now. To quote Warren Buffett: “Be fearful when others are greedy and greedy when others are fearful”. If this doesn’t apply to investing in Portugal I don’t know where it would.

Risk/return rating: on a scale of one to five I give Conduril three stars. While not without risks the company is extremely cheap, especially given the historical performance.