The Brooklyn Investor published an interesting write-up on the Special Opportunities Fund (SPE) that caught my attention, and also Whopper Investments attention. SPE is run by a hedge fund manager that specializes in investing in closed-end funds, and applying activism were necessary to unlock value. This is also how SPE was formed: Bulldog Investors won a proxy contest in 2009, and gave shareholders the option to cash out at a price close to NAV. At the same time the objective of the fund was changed. From the 2009 semi-annual report:

What do we envision for the future of the Fund? The name change we are proposing – Special Opportunities Fund – says it all. The principals of Brooklyn Capital Management, our newly formed investment advisory firm, include Steven Samuels, Andrew Dakos and me. We have a long history of opportunistic investing, primarily through hedge funds managed under the Bulldog Investors name. Since its inception almost seventeen years ago, our original hedge fund, Opportunity Partners L.P. has generated an annualized return of 12.8% vs. 7.4% for the S&P 500 Index. It has incurred a loss in only one of those years.*

We are generally value investors. Our bread and butter is investing in closed-end funds. I have personally been investing in closed-end funds for thirty-five years. However, we have also invested opportunistically in a number of other areas. In certain instances, we have employed activism to unlock the value of our investments. Unlike many other managers who are tethered to a benchmark, we are not interested in making an investment unless we perceive that we can get an edge. After the tender offer, we intend to apply this “edge” philosophy to managing the Fund.

So we get a manager that has a good track record, and they are applying a strategy that makes a lot of sense. From the 2012 semi-annual report:

We purchased most of our shares of these well diversified multi-manager equity funds at a double-digit discount to net asset value. Each fund makes cash distributions of 1.5% per quarter (6% per annum). After extensive discussions with the manager about their discounts, on June 26th ASG launched a self-tender offer for 25% of its shares at a 5% discount to NAV. As a result, the discount narrowed to under 8% and we opportunistically sold some of our shares before the tender offer expired. We tendered the balance and the Fund accepted almost 80% of our shares, a surprisingly high percentage. Since we saw a low probability of further alpha by holding, we subsequently sold our remaining shares of ASG in the market at a single-digit discount. USA’s discount, on the other hand, is still greater than 10% and therefore we have continued to accumulate shares. We intend to resume discussions with management about USA’s discount in the near future.

Besides the example above the same semi-annual report provides plenty of other examples of investments the company is making, the rationale for making them, and what they are doing to unlock value. So unlike most closed-end funds I think there is a good probability that they are indeed creating value. Having a track record is good: doing something that logically makes sense is even better.

The capital structure of the SPE fund is what really got my attention. The fund completed a rights offering this summer for a new class of convertible preferred stock:

…on July 23, 2012 the Fund finally completed an innovative rights offering for a new class of convertible preferred stock at a price of $50 per share. The offering was significantly oversubscribed. The aggregate number of shares issued was 749,086 for which the Fund received a total of $37,454,300 in cash. The converts have been trading slightly above the issue price and we think that is an indication that we got the terms about right. To summarize the basic terms, each convert (1) is entitled to receive a quarterly dividend of $0.375 per share or 3% per annum; (2) is convertible into 3 shares of common stock (subject to adjustment for distributions); (3) will be redeemed in five years at $50, and (4) is callable if the net asset value of the common stock reaches $20 per share (subject to adjustment for distributions).

To be honest: I don’t understand why the convertible preferred stock was created. It seems to be unnecessary complex without significant upside for the common. While all the downside remains with the common the upside is shared almost completely with the preferreds. The flip side of this story is that the preferreds are already callable if NAV grows with just 10%, so it could easily be that they will be called within a year. So why increase the size of the funds assets in such a temporary and volatile way?

The latest reported NAV/share of SPE is $17.68/share while the common shares are trading at $15.81 and the preferreds at $52.00. This means that the common is trading at a bit more than a 10% discount, and it is possible to buy the common without almost no downside risk at $17.33/share. You don’t know how long you don’t have no downside risk since the preferreds are callable at a $20 NAV/share, but unless SPE starts trading at a huge discount this is always a favorable outcome. And while waiting for this positive scenario you will be paid $1.5 in interest a year and you know that no-matter what: you will be repaid at par in 5 years time.

To properly evaluate the value the preferreds you need to create a Monte Carlo simulation. The reason for this is that the path that the asset value takes is very important for the value of the preferreds. You could have two scenario’s where after five years the total growth in NAV is zero, but if in one case NAV briefly hit $20/share in the first year the preferreds will be (or should be) called early while in the other case the preferred owner is going to enjoy five years of interest.

Since I hadn’t programmed anything in a long time this seemed like a fun exercise. I have modelled the growth of the asset value using geometric Brownian motion. This basically means that the value takes a random walk with a certain drift (the expected growth rate) and a certain variance (I used the historical variance of SPE for the past year).

The key part of the simulation, written in Python, is listed below and should be fairly straight forward to understand even if you aren’t a programmer. The full source code of the program can be found here if you want to play around with different assumptions. Simulation results are written to a .csv file that you can open in Excel.

Technically geometric Brownian motion is not completely correct to describe asset prices because it assumes constant variance and uses a normal distribution, but it’s a reasonable approximation to get an idea of the range of outcomes. Besides the variance a key input of the simulation is what you think the expected growth rate of the asset base is. The lower it is the higher the probability that the preferreds will not be called, and the higher the relative attractiveness of the preferreds.

The three graphs below show after how many days you can roughly expect that the preferreds will be called assuming a 5% growth rate, a 7.5% growth rate and a 10% growth rate. Number of simulation trials was 10.000: 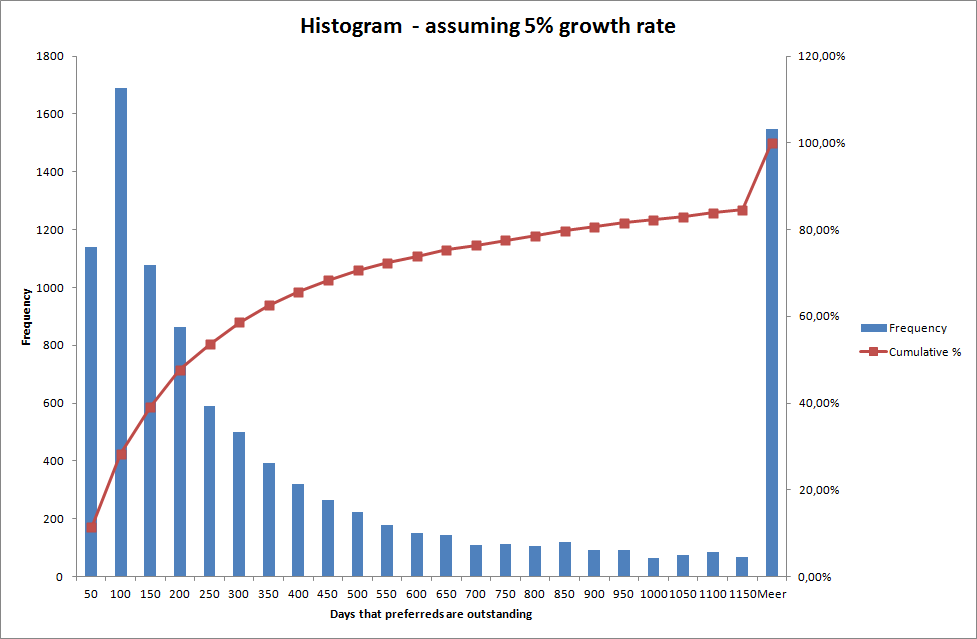 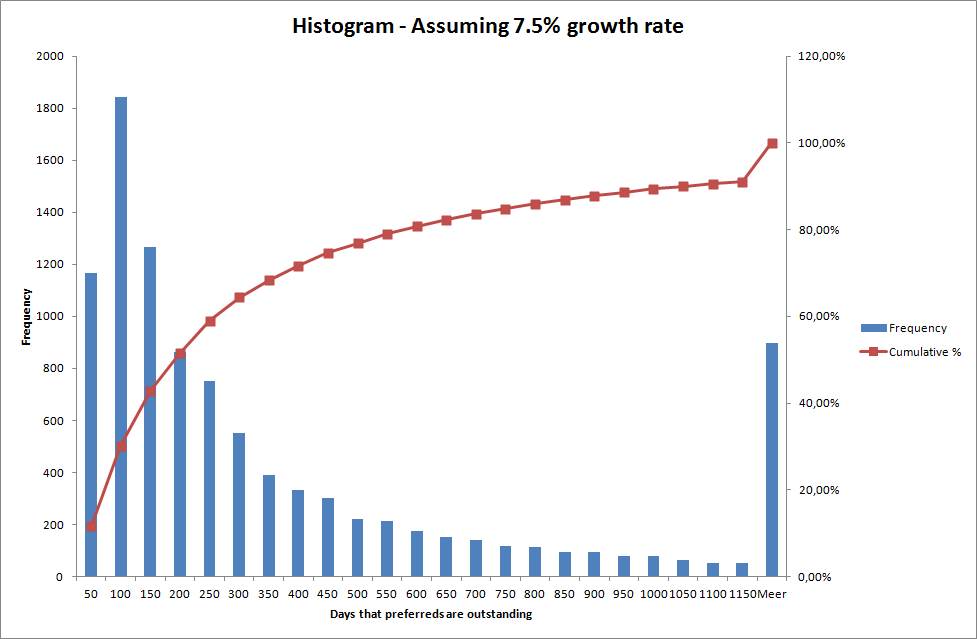 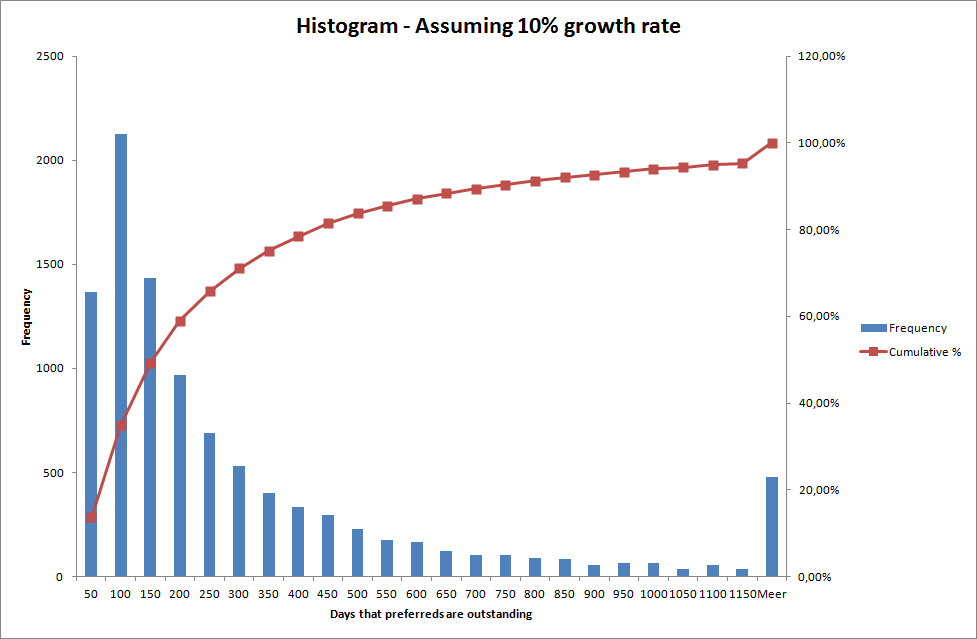 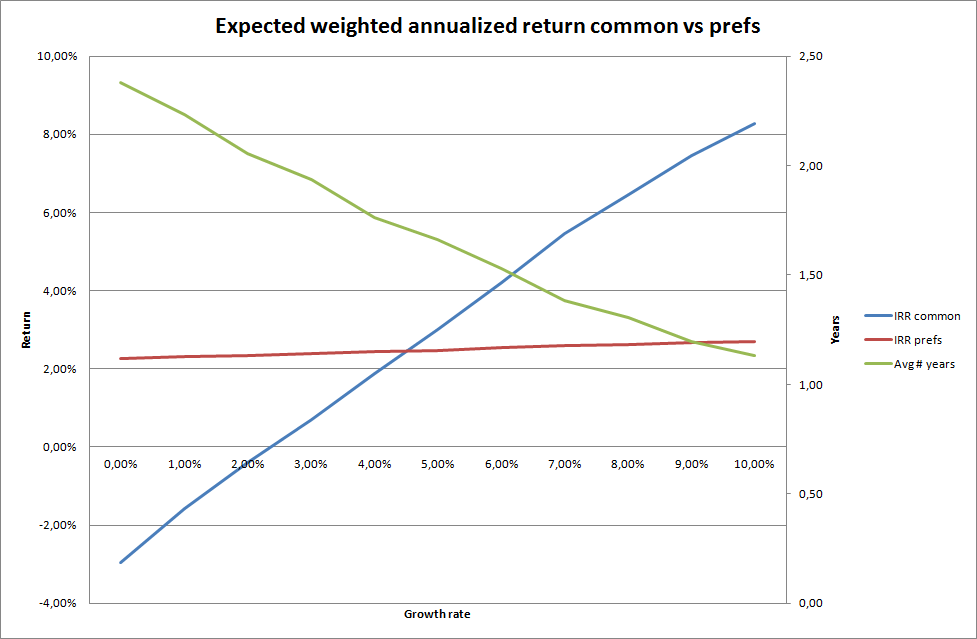 I do think that relatively speaking the preferreds are a good deal. There is a huge amount of excess collateral, and if this would be rated it probably deserves an AAA-rating. And a return of >2% a year for debt with a maturity below five year, and most likely around one year is a good deal. And you do get an option on the discount shrinking as well. I just don’t find it attractive from an absolute return perspective.

One thing about the returns of the common in the above graph that should catch your attention is that the weighted average IRR is lower than the underlying growth rate. For returns below 3% this is logical: here the assets don’t return enough to service the dividends for the preferreds, so you do have leverage to the downside.

At first sight it’s a weird result: but I think the discount is the key to understanding what is happening. The current discount should already account for the highly likely future dilution, and when the preferreds are converted the discount should shrink. By assuming that the discount remains constant – at first sight a reasonable assumption – you are effectively assuming that it is growing. This should boost the expected returns of both the preferreds and the common stock.

If the stock is trading at a 10% discount before the conversion NAV/share is diluted by 3.84%. The probability of this dilution happening is, depending on the growth rate, between 80% and 90% if I can trust my simulation results. So it’s probably fair to say that after the dilution the discount should shrink from the current 10% to ~7%. If we generate a new average return graph based on this assumption we get this: 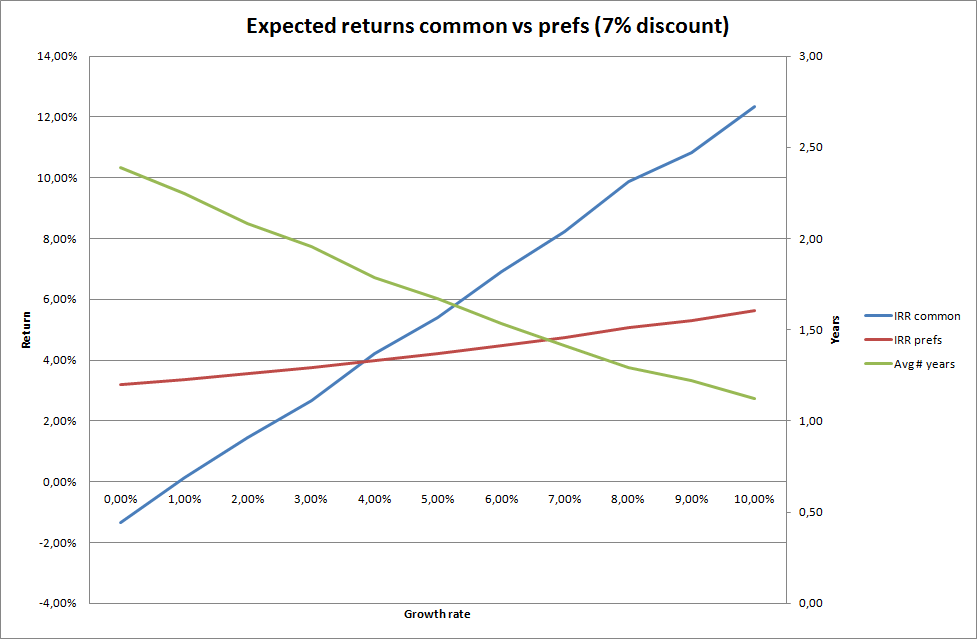 If there is one thing to take away from all my ramblings: at today’s prices you are not truly buying SPE at a 10% discount. Part of this discount (my guess: ~3%) is simply representing the possible future dilution from the preferreds, and because these are trading above par they don’t offer an easy way to profit.

SPE or SPE-P might still be an attractive investment: in the grand scheme of things a discount that is a few percentage points bigger or smaller is no big deal. And while I have talked little about my perspective on the cost structure of SPE or their strategy in this post (it is already long enough as it is), I do mostly agree with The Brooklyn Investor and Whopper Investments about the attractiveness of the fund.

I haven’t yet made up my mind if I should buy SPE, or maybe SPE-P. Another option is to piggyback some of the funds holdings. Their latest semi-annual report is a goldmine filled with cheapish funds that do have a potential catalyst. To be continued…

No position in SPE or SPE-P, might initiate one in the future