If you would have told me a year ago that I would consider investing in Zynga I would have declared you crazy. Valuation wise a lot has changed since then, and the company is actually close to becoming a net-net. On the balance sheet we find  $1.55B net in cash, cash equivalents and securities while Zynga has a $1.66B market capitalization. Not only does Zynga own a significant amount of cash, they also bought new headquarters this year that are worth a cool $272M. This basically means that you are getting the Zynga operating business for free these days. You don’t have to believe in a ‘the sky is the limit web 2.0-story’ anymore to consider an investment, but you do need to believe that it is a viable business.

To get an idea of the historic earnings power of the business I have created the table below with some key data of the performance of Zynga since the inception of the company. 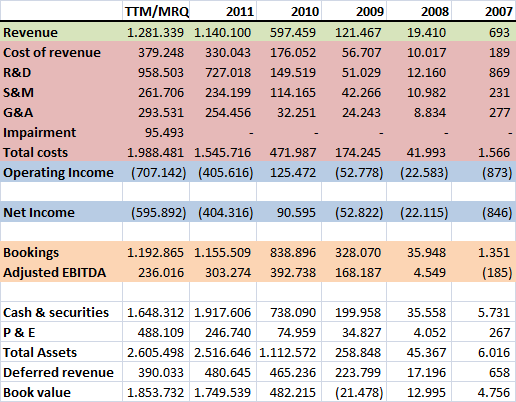 Zynga has shown explosive revenue growth the past years, but seems to have hit a brick wall this year. Unfortunately the company never really managed to show impressive GAAP earnings with the exception of 2010. Fortunately for the company a lot of the expenses booked are non-cash items, and Adjusted EBITDA paints a different picture.

This absolutely doesn’t mean that we can conclude that Zynga has at it’s core a profitable business. One of the biggest costs that is excluded when looking at Adjusted EBITDA is stock based compensation, and this is a huge part of the pay that Zynga employees receive. If you need to pay a bunch of nerds to create games paying them $100,000 a year in cash or $100,000 in stock doesn’t make a huge difference: both costs are just as real, and if your stock drops big time you can bet that your programmers still want to receive roughly the same pay next year. So the GAAP numbers are a more or less reasonable approximation of Zynga’s profitability.

One thing where the GAAP numbers are a bit misleading is in my opinion with regards to revenue recognition. In a sense Zynga’s accounting is conservative: they don’t recognize income as soon as they sell virtual goods, but recognize the income over the duration of the lifetime of the item. I think the more aggressive approach would reflect reality better than the ‘conservative approach’. As soon as you have sold a customer some crap virtual item in Farmville you have the money in your pocket, and you don’t have to spend significant resources to deliver the service the customer paid for. Sure, you need to keep your servers online, but that’s just a small fraction of the cost of the good. Game development and advertising is where most of the money is disappearing.

Currently the delayed recognition of revenue is actually making the Zynga numbers look better than they are since bookings are down the last quarter, but earnings aren’t dropping as fast since they have deferred revenue from previous quarters. In the table above you can see how deferred revenue dropped from 480M at the end of 2011 to 390M right now.

From an asset point of view Zynga looks potentially interesting, and that is extremely rare for a software company since they are generally asset light. Unfortunately it seems to be questionable if the Zynga business model is sustainable. Looking at the historical earnings you get the idea that there are simply not enough paying customers for the average Zynga game to recoup the significant costs needed to create and run a game. And given the trend in revenues betting on growth and increasing economies of scale seems quite optimistic.

So Zynga is still not a stock I would invest in, but at the same time I wouldn’t be surprised if an investment at the current price would turn out favorable. The company has announced to cut 5% of their staff, rationalize their offering of online games and to buy back $200M of shares. If they manage to get their cost structure under control and not to do more stupid stuff with their cash like the disastrous OMGPOP acquisition it could work out alright.