While I was on vacation last week a couple of companies released their yearly results (RELLA.CO and ASFI), and another holding of mine was finally sold (IAM.TO). I’ll briefly discuss the various developments.

Rella is the holding company that owns the biggest part of Aller, a Scandinavian publisher of mostly weeklies. Aller only reports once a year, so when they do it’s a good moment to review how the company is performing. Comparing the balance sheet of Aller with previous year version should give a good indication on what happened with the asset value: 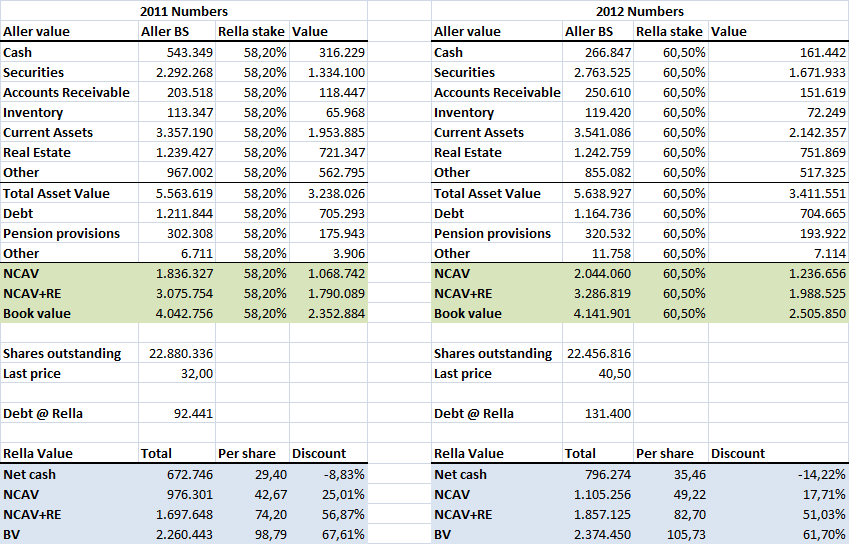 While the share price of Rella is up roughly 25% since I first wrote about the company it’s almost just as cheap today as it was then. The book value of Aller is growing while it’s repurchasing shares and paying out dividends, and as a result Rella is owning an increasingly bigger part of Aller. At the same time Rella is using the dividends received from Aller to repurchase it’s own shares. That’s a combination I like!

The biggest part of Rella’s value consists of the securities on Aller’s balance sheet, but it’s also important that the operating entity remains profitable. The results of primary activities were down significantly in 2012 compared with 2011: 142M DKK in 2012 versus 246M DKK in 2011. This decease is primarily due to employee costs in connection with staff reductions. Revenue is actually up a tiny bit, and I also think it’s positive to see that prepayments from subscribers are up a bit compared to last year. Weeklies aren’t dead yet, and next year should also be slightly profitable:

Based on the current activity level and the 2012/13 budget figures from the leading subsidiaries and the accounts for the latest time periods, a result of primary activities (EBIT) of DKK 100-150m is expected.

After a bit of a delay Asta Funding finally published it’s 10K last week. I haven’t found any big surprises in the 10K compared with the press release that was issued a month ago. Due to some accounting peculiarities it’s not directly visible how cheap ASFI is based on it’s asset value, but it certainly is. The company has currently a $123M market cap while it owns $106M in cash and investments, and it does not have any big liabilities (there is only non-recourse debt). Besides the cash we find $12.3M in consumer receivables on the balance sheet and $18.6M is invested in the personal injury litigation financing business.

Besides these assets that are visible on the balance sheet the company also owns a large number of consumer receivables that have zero book value (fully amortized portfolio’s). Last year these assets generated $36.4M in zero basis revenue. Since the company is not replacing it’s aging portfolio of consumer receivables we should expect that revenue’s will drop in the future, and this could become problematic if there are a lot of fixed costs. They can’t continue on the current path indefinitely. So this is something to keep an eye on, but so far ASFI is still cheap and using a lot of cash productively by repurchasing shares.

Buying this company last year was a mistake. It looked cheap because it had a negative enterprise value and had a history of profitability, but in what could best be described as a beginners mistake I  failed to realize that there were a lot of accounts payable and a lot less accounts receivable. So logically the company had to use a bunch of their cash this year, and IAM was not as cheap as I thought. At the same time the financial performance of the company was also disappointing last year. Since the company is very illiquid it took some time for me to exit my position, but managed to do so this month at a small loss (-3.4%).