As a professional poker player and as someone with an interest in economics and finance you’ll get my attention when I see an article called “Monetary Origins of the Poker Bubble“. In the article the author, a proponent of the Austrian school of economics, makes the argument that the poker boom was caused by the FED due to artificial low credit rates. Cheap credit entice businesses and individuals to spend money, and if it’s too cheap it could potentially create a bubble. It’s probably a good explanation for the US housing bubble, but I think this is far fetched at best to use this as an explanation for the sudden popularity of poker. I’ll try to explain the main flaws in his argument one-by-one:

The author dispels the notion that the introduction of televised poker with hole card camera’s and the story of Chris Moneymaker were the main ingredients to fuel the poker boom because hole cams were introduced in 1999 on British television without causing the poker boom, and before Chris Moneymaker won the main event it’s popularity was already rising. Charlie Munger is known for using the term Lollapolooza effect to describe multiple factors acting in the same direction to explain explosive outcomes. I think that’s exactly what happened with poker. The introduction of hole card camera’s, the possibility of playing online, Chris Moneymaker grabbing headlines were all factors that worked together to make an explosive growth in popularity possible. The author, Peter C. Earle, writes:

But fads and surges of popularity come and go; these explanations hardly account for why, in a short amount of time, tens of millions of people suddenly flooded into a familiar—indeed, 150 year old—American card game, frenetically expending tens of billions of dollars on it.

The poker boom wasn’t a case of a 150 year old sport that suddenly skyrocketed in popularity because credit was cheap. It became not only for the first time in it’s history a good spectator sport, it was also the first time you could play it easily online from your home. Throw a good story on top of that and you have an explosive mix. I also doubt that the 2003/2008 period was the first time in the history of poker that interest rates were low. So why didn’t we see a poker boom somewhere in the past?

I’m not the only one to criticize the author, and he actually already addressed some concerns in this blog post. The author asserts that the explosion in poker’s popularity was a classic speculative boom. I’m not so sure about that. Did we have a Fifty Shades of Grey bubble the past years? Is there an Angry Birds bubble? I don’t think anyone is going to answer yes on those questions. The books and games are consumption goods, and just because they are popular for a limited time doesn’t mean that it’s a bubble. Poker is the same: it’s not an asset class that you can speculate on, it’s entertainment. If it’s popular people spend more money on it, but nobody is buying poker chips expecting that they can resell them a year later for more money. A lot of people buying poker books doesn’t make a bubble.

The biggest issue that I have with the article is probably the fact that there is little reason to believe that the poker bubble burst in 2006. So not only do I think that there is no causation between low interest rates and the popularity of poker, I also don’t think there is any significant correlation. On Poker History we can find some data on the peak number of players online in a given month: 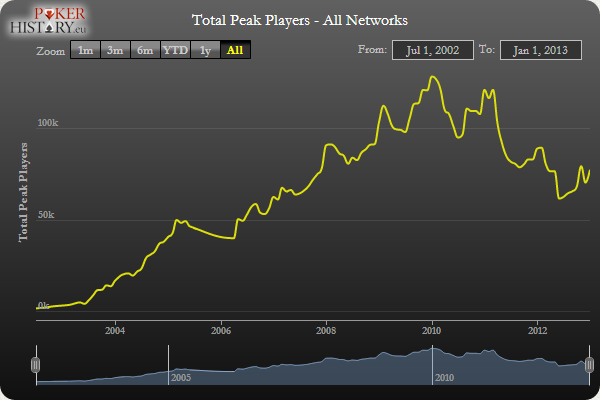 Looking at the above graph it seems hard to argue that the poker boom ended in 2006. Only after the United States Department of Justice pressed charges against the three biggest online poker operators on 15th April 2011 we see a big drop in activity, a day known as Black Friday in the poker community. Regulatory developments are a way better explanation of the popularity of poker than interest rates. The big drop in people participating in the 2007 WSOP Main Event, used by Earle as an argument that the poker ‘bubble’ deflated simultaneously with the housing market, is also explained by regulatory developments. In 2006 the UIGEA act was passed, resulting in the exit of PartyPoker from the US market. At that time PartyPoker was the biggest online poker site, and a substantial amount of players were send to the live tournaments through online satellites.

The fact that a number of poker shows stopped broadcasting in the 2006-2008 time frame is also a poor indicator for a bubble bursting. Those shows were sponsored by the online poker sites, and with a number of them withdrawing from the US market due to the new regulations it’s not a surprise to see some shows getting cancelled.

I think the premise that the FED created the poker bubble is flawed in almost every way possible. Something can be temporarily popular without being a bubble, the popularity of poker continued far after the FED increased interest rates, and the regulatory changes provide a more logical framework for explaining the decline in popularity. And if Austrian economics explain why we have had a poker bubble, can it also explain why we didn’t have a table tennis bubble? And how does it explain the “pogs” bubble in the 90s?

The popularity of poker and low interest rates are in my opinion just an accidental weak correlation, not an explanation. And you can certainly not explain developments in the brick and mortar poker business while ignoring online poker or regulatory changes.

6 thoughts on “Austrian Economics: the FED created the poker bubble…”