Burelle is a French holding company that caught my attention last week when I stumbled on this write-up since it’s allegedly trading at a 50% discount to NAV. The company derives most of it’s value from it’s stake in Plastic Omnium, a supplier of plastic components and fuel tanks to the auto industry. Plastic Omnium has currently an €1.8 billion market cap and provides parts to basically every major automotive manufacturer. They also have a small environment division that provides “waste containerization solutions”. The 2012 financial results presentation that is posted on their site gives a good overview of the business and their financial performance for the past years.

As is clearly visible an investment in Burelle is basically an investment in Plastic Omnium, and you get some real estate (Sofiparc) and a small private equity fund (Burelle participations) thrown in for free. The book value of the real estate is possibly a bit understated while I have no idea how fair Burelle participations is valued. Given the small size of those two components I’m going to trust book value and focus on Plastic Omnium.

Some thoughts on investing in France

France seems to be a country with a fair amount of reasonable cheap stocks, but a lot of the smaller and cheaper companies only publish annual reports and other news in French. Unfortunately my French is pretty bad, and while you can get a decent idea on what’s in a certain document with Google Translate it’s far from perfect. If you would buy some Japanese net-net that’s a profitable cash box it’s probably fine to not fully understand what you are buying. But if you buy something whose value is dependent on future earnings stability and/or growth I would want to know more. Most cheap companies in France seem to be good or even excellent businesses that are trading at a relative low multiple. Given the difficulty in understanding those companies I’ve never bought anything In France, even though my research to-do list is littered with French names.

Burelle also reports only in French, but Plastic Omnium has a lot of excellent English content online including annual reports, presentations and shareholder letters. So at least I can figure out what I’m buying.

Plastic Omnium is not your typical value investment. It’s trading at roughly 2x book value, it has a lot of intangible assets and goodwill on the balance sheet combined with a decent amount of debt. From an asset point of view Plastic Omnium is not a very safe investment, but it does have the earnings and cash flow to warrant the current valuation. I have collected some historical numbers in the spreadsheet below: 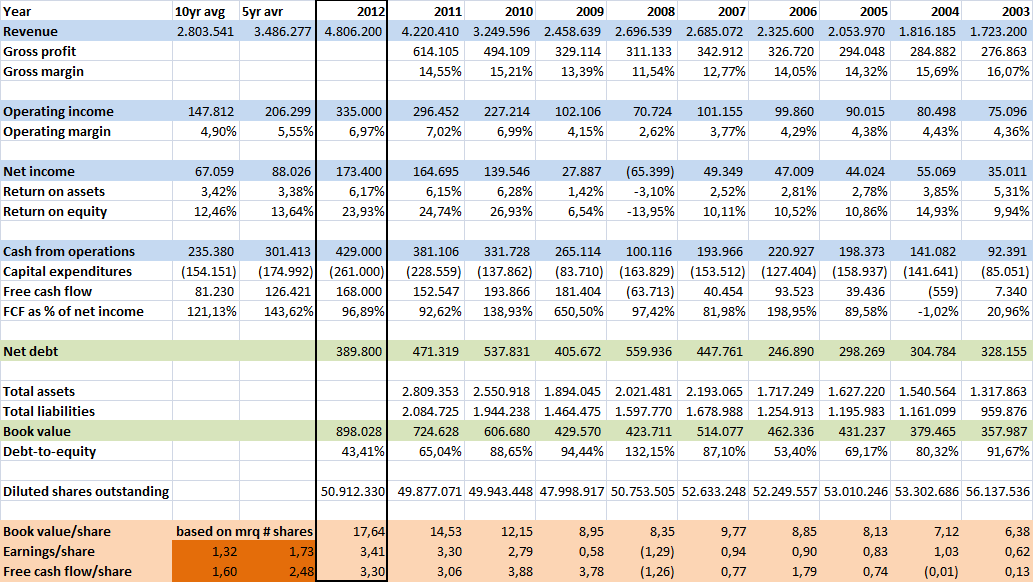 Plastic Omnium has been growing organically and by acquisitions. Because of the acquisitions the company has recognized amortization charges the last few years for “contractual customer relationships” and other intangibles. From an economic perspective this is bullshit since the value of the acquired intangibles should be going up when the subsidiaries are growing, as is the case here. In 2011 the amortization was €17 million compared to €165 million in net income. The high FCF as a percentage of net income is also a hint that some of the non-cash charges on the income statement are pessimistic compared with economic reality.

The two key questions that pop up when looking at the results are:

The first question is the easiest to answer. Plastic Omnium started reorganizing in 2008 to cut overhead, production costs and capital employed. This initiative seems to have been successful. The presentation of the 2011 results include a few graphs that shows that “production costs and overheads as % of revenue” have declined steadily: going from 37.1% in 2007 to 32.2% in 2011. Payroll as % of revenue shows a similar decline: 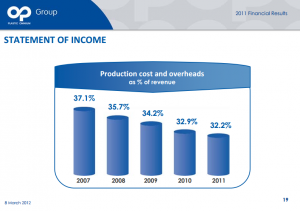 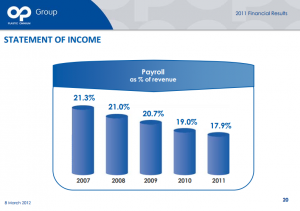 They also closed two factories in France in 2009 while they have been expanding outside Western Europe in more attractive markets. The company is planning to continue it’s expansion in developing markets the next few years. They have six new plants under construction in China and one in Russia. In the next four years €1.2 billion in self-financed investments are planned: €800 million in capital expenditures and €400 million in R&D.

This also gets us to the more difficult question on how future is going to look like. The company is obviously expecting that the future is bright given their expansion plans, and that’s probably true for the near future since the order backlog was up sharply. Betting that automotive production is going to grow in China also seems like a safe bet, and I also think that it’s fair to think that an increasing amount of plastic will be used in automobiles. Saving weight is good for the fuel consumption in normal cars and for electric and hybrid vehicles it’s even more important since driving range is a major selling point. 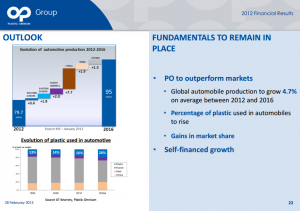 Plastic Omnium also expects that it will be able to grow it’s market share. I’m not an industry expert, and I don’t have any real insight in the competitive position of Plastic Omnium. They do spend a lot of money on R&D, and they obviously have been doing something right. They managed to grow market share last year when revenue was up 16.7% while worldwide automobile production increased by 6.6%. But the company is not active in some obscure market, and you can assume that their competitors will not be sitting idle. I think it’s questionable if they will be able to maintain their current margins in the long run.

Adding it all up I would say that Plastic Omnium is most likely reasonable valued. Based on their current earnings and free cash flow (that includes growth capex) the current market price seems cheap, especially since it appears that the company can reinvest in their own business at attractive rates. But since there is probably going to be some mean reversion in profitability in the future you don’t want to pay a too high multiple for Plastic Omnium.

Plastic Omnium was founded in 1947 by Pierre Burelle, and Laurent Burelle has been Chairman and CEO since 1981. The Burelle family is still the biggest shareholder in the company, and they own 82.4% of Burelle SA (indirectly they own 47% of Plastic Omnium). The low float probably explains why there is such a big discount between Burelle and Plastic Omnium, but it also means that the incentives of management and long-term outside shareholders are as aligned as they can be. The CEO got paid nearly €3 million in 2011, so the value of the families stake in Plastic Omnium is worth almost 300 annual salaries.

Investing in Burelle makes it possible to invest in Plastic Omnium at a nice discount, but there is almost always a good reason for some discount. You add another layer of expenses at the holding company level, and the structure is also not always tax efficient. This paper provides a nice overview of possible positives and negatives of holding companies, and how they compare to closed-end funds (that also often trade at a discount).

My guess is that the discount can be explained for a large part by the fact that the company does not simply pass through the dividends it receives from Plastic Omnium. Burelle has a lower dividend yield and it invest some money in ‘non-core’ activities such as the real estate and the private equity fund. The lack of liquidity of Burelle is probably the second major factor that is causing the current discount. The market value of the free float is €104 million while the average daily trading volume is less than one tenth of that in Plastic Omnium.

Investing in Burelle gives you the opportunity to partner with an owner-operator in a high quality business at a sizable discount. Estimating the value of Plastic Omnium isn’t easy, but the current market valuation seems reasonable. I’m obviously not a believer in the efficient market hypothesis, but I do believe that the market is pretty efficient most of the time, especially when we are talking about companies with a multi-billion market cap.

So the question that matters in the end is whether or not a 50% discount is fair. I don’t think it is: they are not lighting money on fire at Burelle, so economically the value of investing directly in Plastic Omnium or investing indirectly through Burelle shouldn’t be very different. You could even argue that Burelle should trade at a premium since they own a controlling block of shares, and someone might be willing to pay for control at some point in the future.

I also have to admit that I’m somehow attracted by the fact that there is absolutely no catalyst on the horizon to realize value. Implies I’m not paying anything for all the positive things that could happen at some point in the future, and I believe that if you buy cheap something good will eventually happen. And in the meanwhile: there are worse things than being a long-term Plastic Omnium owner.

Rating: on a scale from one to five I’m going to give this idea two stars. We can buy a nice business at a healthy discount, but it’s not ultra cheap and I’m not very certain about the competitive position of Plastic Omnium in the long run.