A little bird pointed me in the direction of Aker Philadelphia Shipyard, a company headquartered in Norway, but operating in the US. As recently as 2011 the future of the Aker Philadelphia Shipyard was uncertain, but thanks to taxpayer money and investments from its Norwegian parent the company was saved. They took a gamble though, and constructed two product tankers without having a customer lined up. This is now paying off: both ships have been sold on attractive terms, and as of today Aker Philadelphia has 108 million in cash, 20 million in restricted cash and just 8.3 million in interest-bearing debt. To make things even more interesting they have a profit sharing agreement for the two sold vessels that is anticipated to bring in more than $35 million per vessel. Compared to a $46 million market cap this certainly sounds like a steal! Some quick stats first:

Aker Philadelphia released it’s annual report a few weeks ago, but since the delivery of the second vessel was completed on 31 January 2013 we have to make a few adjustments to the financial statements to get a view of the current position. They have received $81 million in cash for the delivery of the vessel in the current quarter. This was partly used to repay debt, and since they had not yet recognized any revenue we also have to account for taxes. The adjusted balance sheet should looks like this: 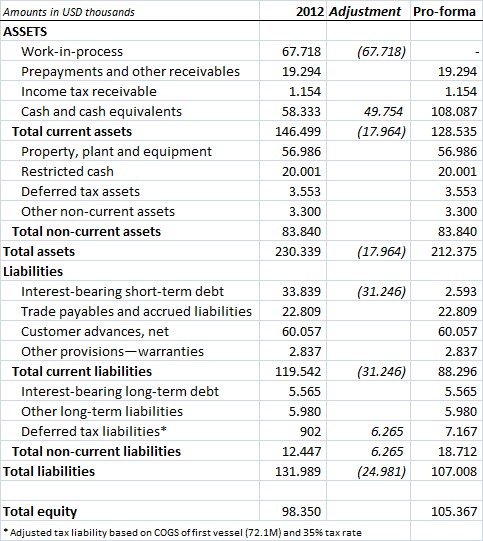 As is visible Aker Philadelphia is in an excellent financial condition at the moment with a strong cash position and almost no debt. The biggest liability are customer advances related to the current project they are working on: two aframax oil tankers for ExxonMobil. This is a liability that should partly disappear with time when work on the two tankers is completed, but you certainly cannot ignore it. If a customer prepays $100 dollar on an item that you can manufacture for $90 you can only keep $10 in the end. We can estimate how much profit AKPS expects to make based on the revenue and expenses recognized to date, and the size of the remaining backlog. I estimate that they will generate a bit more than $25 million in gross profit based on the current order backlog:

Based on the expected gross profit and the reported SG&A and depreciation expenses from last year we can make a guess on how the income statement of Aker Philadelphia is going to look like the next two years. Note that this is a conservative estimate since the first vessel should be delivered on April 30th, 2014 while I have included two full years in expenses. 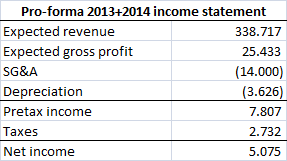 We should assume that at the end of 2014 the customer advances liability will be gone together with an equal amount of cash: what the company will get in return is the $25.4 million in unrecognized gross profit and $5.1 million in net income. At the same time the restricted cash should become unrestricted after the successful delivery of the vessels. This should result in the following balance sheet in two years time: 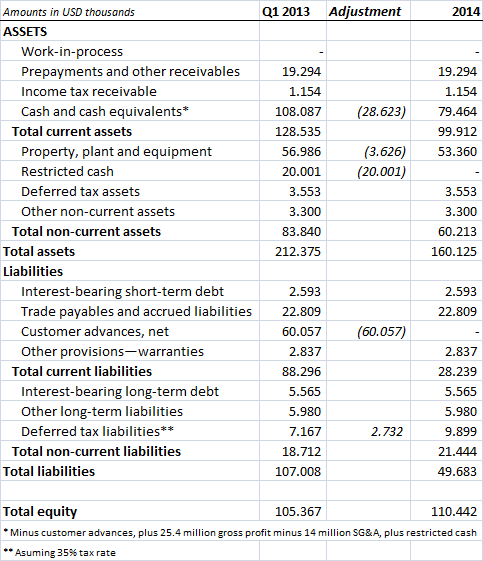 If Aker Philadelphia would at that point in time pay all liabilities, liquidate receivables and pay net taxes you would be looking at a company with no liabilities and two assets: $57.1 million in cash, and $53.3 million in PP&E. Obviously I hope (and expect!) that the company is going to find new orders and continue to be in business after 2014, but I think this gives a good idea that at current prices ($46 million market cap) there is value even if Aker Philadelphia Shipyard would simply liquidate after completing their current order book.

As already mentioned in the introduction of this write-up there is more value than just the operating business. The company sold two product tankers to Crowley for $90 million in cash and a profit sharing agreement. When the sale was announced in Augustus last year Aker Philadelphia wrote the following in the press release:

Based on current market conditions, AKPS anticipates receiving a nominal amount in excess of USD 35 million per vessel through the variable component. This amount has the potential to be significantly higher if market conditions continue to improve. The variable component is payable on an annual basis over the life of the vessel and will adjust upwards or downwards based on actual charter rates and other factors. There is no cap on the amount of the annual payment.

Time will do the “talking” as to the true value of the profit sharing element, but given recent market developments and our view of market fundamentals, we are confident that this transaction will provide good value to AKPS for many years to come (beyond our build cost).

In the last 4 months of the year AKPS earned $3.3 million pre-tax on the profit sharing agreement. Extrapolate that to two ships and a full year and you get $20 million pre-tax, or $13 million net. That’s a huge recurring revenue stream that’s going to provide value for years to come. I don’t know a whole lot about shipping, but it’s probably a safe bet that the average tanker can remain in service for decades. If you would assume $13 million in cash per year for a period of 10 year the NPV of this ‘hidden asset’ is a whopping $76 million.

This is maybe a bit optimistic since the company expected “more than 35 million” per vessel, and $10 million per vessel for 10 years in a row would obviously be a lot more. But at the same time the company also disclosed that it could be significantly higher if market conditions improve. So lets take something in between and go for $5 million in pretax income per vessel for a 10 year period with a 10% discount rate. This would give us a $38 million net present value for the profit sharing agreement.

The valuation puzzle has three pieces: the run-off value of the current order book, the value of potential new business and the profit sharing agreement. I would say that the run-off value is roughly $46 million (the cash in 2014 discounted two years at 10%).

If future projects would be expected to be as profitable as the current project we would be looking at roughly $6 million in net income a year ($29 million gross, minus $14 million SG&A, minus $3.6 million depreciation, 35% tax rate and divided over two years). Throw a 7x multiple on that (as a messy way to account for the fact that this is about earnings after 2014) and we are looking at a $42 million net present value. PPE is expected to be at $53 million in 2014 if there is no capex, so guess this is a very convoluted way of saying that the assets on Aker Philadelphia books are indeed worth roughly book value.

It’s hard to make a good forecast for the earnings from the profit sharing agreement since we don’t have a whole lot to go on, but the $38 million calculated above seems like a decent estimate that’s not overly optimistic.

Combine the three numbers and we get an intrinsic value of $126 million. This would imply that the company is worth almost three times it’s current market value, and instead of a big discount to book value it should trade at a ~20% premium. Since the profit sharing agreement isn’t on the books I don’t think this is crazy.

Aker Philadelphia Shipyard is owned for 71.20% by the Converto Capital Fund that specializes in maritime companies. The assets in the fund are owned by Aker ASA, a Norwegian company with billionaire Kjell Inge Rokke as major shareholder and chairman of the board. And guess who the CEO is of Aker Philadelphia? Kristian Rokke, the 29 year old son. He has been working at AKPS since 2007, and assumed the role of CEO early 2011.

I’m not completely thrilled with the ownership situation and the CEO. Kristian Rokke can’t be very experienced and it’s not his own net worth that is tied up in the company: don’t think incentives are perfectly aligned here. On the other hand he seems to have done an excellent job the past years, he’s probably motivated to prove himself, and his dad and/or Aker can support him if needed. Aker Philadelphia got for example for the recently completed vessels a loan at 3-month LIBOR+3.80% from Aker that was secured by a second lien on those vessels. That sounds like a good deal to me. They also got a performance guarantee from Aker on a $80 million construction loan that carried a 1% lower interest rate.

Against the recommendation of counsel, I will mention that our market capitalization still trails significantly behind our book equity.

At year-end, we had a book equity of $98.4 million, but a market capitalization of only $24 million ($36 million on March 15, 2013). A significant portion of our balance sheet is comprised of cash, with only $8.3 million in interest bearing debt after the delivery of the Florida.

You don’t need to read between the lines to figure out what he is thinking.

We have to do a little bit of puzzling to figure out what Aker Philadelphia current financial position is, but I think it’s not that hard to understand that it’s really cheap. I also expect that this should become even more obvious when the cash from the profit sharing agreements will come rolling in. I’m usually skeptical when I see people presenting an investment case with a big focus on potential catalysts, but that’s because you usually see some bullshit based on how attractive the company is as an acquisition candidate or some other speculative event. The cash, and the resulting earnings, from the profit sharing agreements should be a legitimate catalyst this year :).

While Aker Philadelphia is very cheap it’s not a company without risks. Things can go wrong on big construction projects, and since the company is currently betting it all on a single project – the two aframax tankers – I don’t think AKPS is a sure thing. But since it’s very cheap a lot can go wrong before you start losing money on this investment.

Rating: On a scale from one to five I’m going to give this idea three stars. I’m going to size the position a bit below what I would do in a vacuum since I already have a position in Conrad Industries, and I don’t want to make a too concentrated bet on one very specific industry.

31 thoughts on “Aker Philadelphia Shipyard (AKPS.OL): cheap with a catalyst”