I entered my position in China Energy Corp. at the end of March with the expectation of making a low risk 8% return in a couple of months. The completion of the going private transaction is going slower than expected, but the transaction seems to be on track. The company filed a form 15-12G last week terminating the registration of the shares with the SEC while the reverse stock split was executed more than a month ago. So the going private transaction at $0.14/share is at this point in time really a done deal, but the shares are still trading unchanged around $0.13/share.

The fact that the shares are still trading after the reverse stock split was effectuated more than a month ago is normal I think for these kind of transactions. I owned a few shares of AssuranceAmerica in the beginning of this year. In this case the reverse split was effectuated on March 11, the form 15-12G was filed on March 26, the shares stopped trading almost a month later on April 16 and the money hit my account on May 10. If China Energy Corp. would follow a similar timeline you are looking at a ~6.5% return in ~six weeks time. That’s pretty attractive if you ask me, so I decided to buy a few more shares today.

I already mentioned in my previous post that it was my intention to sell the remainder of my Allan International position soon, and that’s exactly what I did today. Including dividends the stock returned 17.5% in a bit more than one and a half years. Not bad, but not good either compared to the overall market or my own performance. But you can’t get it right every single time, and making mistakes is part of the learning process. But luckily making mistakes in investing doesn’t have to be costly. Not just because you can do something stupid and get lucky, but mainly because the market is often approximately right about the fair value of a company. Buying something that you think is undervalued but is actually reasonably priced isn’t going to cost you in the long run.

No position in Allan International anymore. 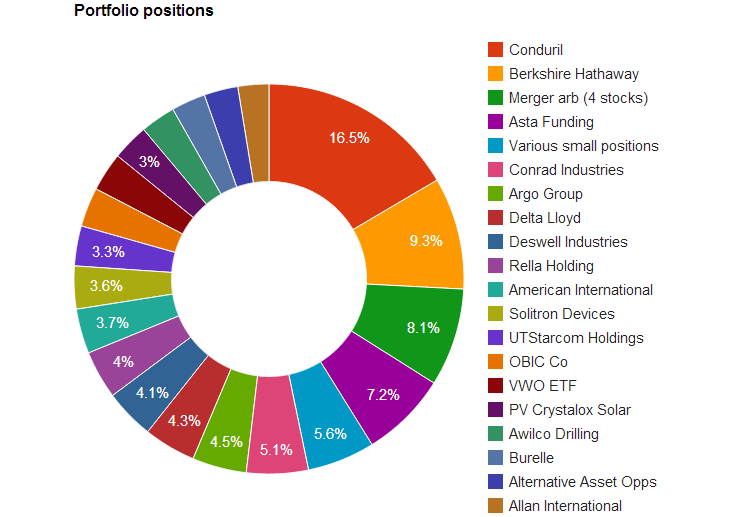