My screening process for stocks is simple: I just wait till I stumble on something that sounds really cheap, and then I start digging to find out if that’s true, or if there is more to the story. Spindex Industries caught my eye because it’s trading at an 3.3x ex-cash PE-ratio, it has been profitable every year since 2003, insiders own a decent chunk of stock and it’s paying a 4.6% dividend. The company is a manufacturer of precision machined components for various sectors such as imaging & printing, and automotive & machinery. The company is listed in Singapore and has manufacturing locations in Singapore, Malaysia, China and Vietnam. Lets start with some quick stats from Yahoo Finance first:

So the key ratio’s above hint that the stock we are looking at isn’t expensive, but what of course also matters is how fast the company is growing and how good the business is. The table below shows historical financial data that should shine some light on those questions: 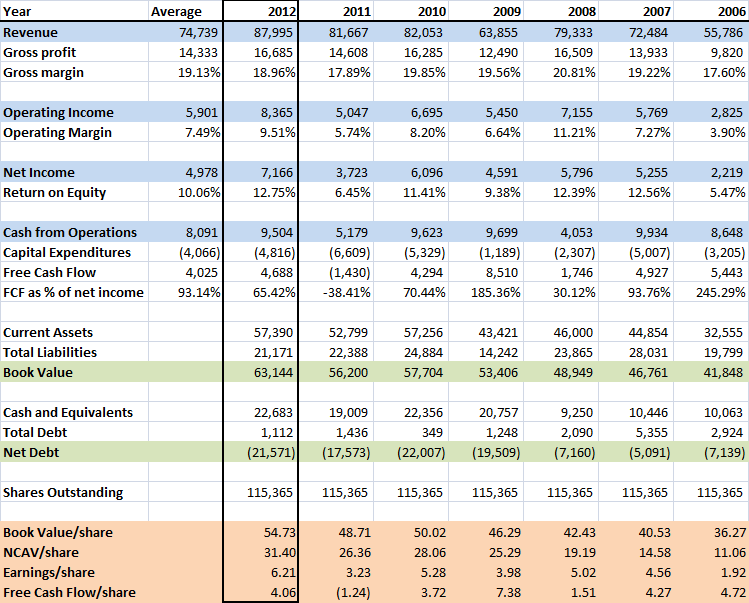 Spindex Industries seems to be a reasonable solid business. Gross margins are stable and despite a net cash position the average return on equity is decent. Book value has grown 7% a year since 2006 while they returned on average roughly 30% of net income to shareholders through dividends. If a stable solid business has on average a return of 10% on equity I’d say it should be worth roughly book value. That’s of course if the company is just the company itself, and not a company + cash box.

So in this case the company should be worth roughly book value + the value of the net cash on the balance sheet. Book value is 54.7 cent per share while there is 18.9 cent per share of cash for a total value of 73.6 cent per share. With the shares trading at 39 cents it implies a possible upside of ~90 percent.

That’s pretty decent, but I would argue that at that point the shares would be overvalued. The large cash position of the company implies in my opinion sub optimal capital management and some sort of discount should be warranted to account for this. I have no idea how big of a discount would be fair, but it should be bigger than zero (and smaller than the current 47%). In addition you could argue that you would want a bit of a discount because of the countries the company is active in, or that some of the cash on the balance sheet is required as working capital.

I know little about the insiders of the company, but there are two things that I like. They are not paid with options, but cash bonuses, keeping the share count constant. Secondly the executive chairman owns a 24% stake in the company, probably since he assumed the position in 1989. I do wonder though what the hell an @-sign is doing in his name: he’s called “Tan Choo Pie @ Tan Chang Chai”.

Is Spindex Industries cheap? Absolutely. Do I own it? No. Why not? Good question! Part of the reason is probably that I’m at the moment almost fully invested. If I would have 100% cash and zero other idea’s I would absolutely buy some shares. The second part of the reason is that it’s cheap, but it’s not the magical 50 cent dollar. It’s a bit of an arbitrary hurdle, and I have to admit that I have bought plenty of times stocks at a smaller discount, but when you are almost fully invested you can afford to be picky.

No position, but might change my mind at any time