Last year when I first wrote about Alternative Asset Opportunities (TLI.L) I was very enthusiastic since the fund promises to deliver high returns that are uncorrelated to the market since it invests in life insurance policies. I quickly realized that the estimated life expectancies were probably too optimistic, but that possible returns were still attractive. This week the fund released the final results for the fiscal year that ended 30 June 2013, so a good moment to check how the thesis is playing out so far.

Last year wasn’t a very good year (for investors); the old guys and gals apparently didn’t feel like dying. The fund started the year with $166 million in face value of policies, and based on the average age of the insured (88.7 years) and the CDC 2008 life tables you would have expected that ~14% of the population wouldn’t survive the end of the year. The result didn’t come close to this number, and the few realized policies weren’t particularly large. An updated overview of the historical policy maturities, and the differences between the expected values and realized values is provided in the table below: 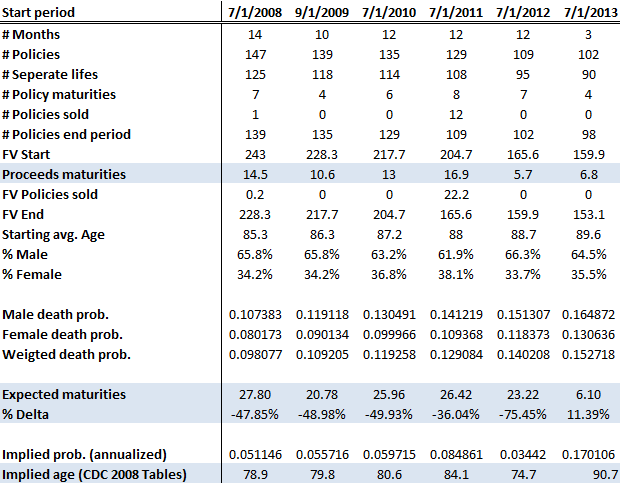 What’s also visible is that the fiscal year 2014 has a strong start, mainly thanks to one big $5 million policy that reached maturity. But at the same time it’s clear that the number of policies that mature is consistently lower than what would have been expected based on the CDC 2008 life tables. The annual report contains an excellent in-depth discussion about this issue, and the company has opted for a more conservative approach to estimate LE’s:

Up to the end of 2012, the Board obtained the majority of its LE estimates from two major providers. Although past experience is that they have tended to underestimate LEs, both have recently made alterations to their underwriting methodology to address these issues, and the Board was therefore keen to establish what, if any, effect these changes might have on the LEs previously provided. So it commenced a programme of re-assessment of LEs, involving 38 policies with a face value of well over half the total portfolio, and a total of 34 lives. So far, 29 of these policies have been fully re-assessed.

The Board was pleasantly surprised to note that the result of this exercise so far, if applied across the whole portfolio, would be to reduce portfolio LEs by approximately 1 month and increase valuations by around 1%. The Board has, however, become aware that third party evidence suggests that these providers continue to underestimate LEs, and this seems to correspond to the Company’s experience to date. LE estimates were therefore obtained, starting in April 2013, from a third provider, whose LE estimates typically are longer than those of other industry participants. As expected, their estimates for the policies assessed so far were indeed significantly longer (by an average of 24 months compared to the average from the original two LE providers).

Weighing this information up, the Board decided that it was appropriate to adopt the average of the three providers’ estimates, which take account not only of the most recent LE calculation methodologies but also of changes in the medical status of the insured lives. The use of a third LE provider introduces a more conservative element into the valuation process, although it should be noted that the majority of market participants have tended to use just the original two providers when trading policies. This new approach left two issues to be decided.

The first related to the valuation of those policies which have not recently (that is to say since 1 April 2013) had a new LE estimate. The Board could, of course, have continued its policy of using simply the last obtained LE estimate regardless of recency and providing projections for shareholders of the hypothetical effect of changes in LE for the remaining policies on the NAV. The Board has, however, decided that there is good enough evidence that it should use more conservative (i.e. longer) LEs, and that it cannot ignore the outcome of the figures obtained so far based on three providers. So far, 29 policies with a face value amounting to over 40% of the portfolio have been re-assessed. The average change in LE is an increase of approximately 12%.

I think that it’s probable that the new third party LE provider is closer to the mark with regard to the true life expectancies than the other LE providers. In my valuation I’m actually expecting that the average LE could be 3 years higher than the expectations from the CDC 2008 tables. While the company has adjusted their life expectancies upwards they are still slightly below the probabilities of the 2008 tables. I found this quote also interesting:

Past mortality is not, of course, a guide to future outcomes, especially as the LE basis has been changed, but if a continuing 50% mortality rate were to be assumed with an unchanged discount rate, the net asset value per share as at 30 June 2013 would have been 20.6p per share. This figure is provided to give shareholders a measure of the effect on the portfolio of low mortality rates, but it is an illustration only; in practice the high discount rate used in valuations at least partially allows for uncertainty in this respect.

One thing that I missed in my initial valuation is that the company is apparently paying increasingly higher premiums. Last year the TLI paid $8.2 million in premiums (while expecting a $8.4 million bill) and it’s expecting to pay $8.7 million this year if there are no further policy maturities. So they are now paying more while they have a slightly lower amount of active policies. To account for this I have updated my model with the assumption that premiums for existing policies will increase with 5%/year.

The result of this new assumption is that the expected return drops from ~9% to ~7.5% at today’s share price. It’s certainly not a spectacular expected return, but given the low correlation with the market it’s still pretty good. And it should be noted that this is the expected return after assuming that the LE’s should be adjusted upwards by a full three years. I certainly think the LE’s of the company are too optimistic, but escaping death is getting pretty hard once you have a group of people with an average age of 89.6 years. Giving them a full three years higher LE than the general population might be overly generous, and if it’s in fact ‘just’ two years higher – in line with the expectations of the new LE provider – you are already looking at a 10% return.