Emeco describes itself as worlds largest independent mining equipment rental business. They get the majority of their revenue from Australia, with the remainder coming from Canada, Indonesia and Chile. The business is at the moment struggling because the demand for their equipment has plummeted. In FY2013 utilisation dropped from 80% at the beginning of the year to 50% at the end of the year, and it’s currently down to just 43%. Yesterday the company provided some guidance on expected results for 2014, and the picture isn’t pretty: EBITDA will shrink from A$175 million to A$90-105 million while operating profit, before any potential impairment losses, will be between negative A$10-17 million. Throw some financial leverage in the mix and it isn’t hard to understand why Emeco isn’t loved right now. Notice the difference between market cap and enterprise value:

The lens you use to look through to evaluate a business can make all the difference. This is how Morningstar views the business (emphasis mine):

Emeco was caught dramatically by the contraction in mining and civil construction. Demand fell steeply in second-half 2009 causing a drop in utilisation rates. Still, it survived. It is among the most volatile of companies with cyclical demand, high operating leverage and heavy capital expenditure requirements.

When you look through the Morningstar lens it’s hard to see something to like, but I would argue that they are viewing the company from the wrong angle. Demand is certainly cyclical, but is the operating leverage really high? Are capex requirements a problem? Thanks to red. who has been blogging about Emeco since the end of 2012 I view things slightly different.

Emeco is a rental company: they don’t own a large production facility with high fixed costs. The PP&E on their balance sheet is mostly dump trucks, excavators and other heavy equipment. When there are no customers it’s just sitting idle without draining cash, and without losing value: a truck that isn’t used isn’t subject to wear and tear. This is also recognized by the company in the accounting since depreciation is calculated and charged based on machine hours worked over their estimated useful life.

When you check the income statement you’ll see that the biggest costs are in fact variable costs: repairs and maintenance, and depreciation expense are the biggest expenses, and both are variable because it’s based on the utilisation rate of their rental fleet.

What I think is a second misunderstanding of the business are so called heavy capital expenditure requirements, because it’s actually an opportunity to adjust the balance sheet to demand. Last year the company recorded a depreciation expense of A$107 million for plant and equipment while it started the year with A$1,305,962 in gross P&E and A$793,128 in net P&E. That’s a lot of depreciation in a year where the average fleet utilisation was just 67%. If we do the math this implies that the average expected useful life of the equipment is a bit more than 8 years when fully utilized. What this means is that Emeco can relative easily shrink their rental fleet when demand is low. Simply stop reinvesting in new units, and normal wear and tear will reduce the fleet.

A second important implication of the relative short life of the heavy equipment (presumably when it’s used 24/7) is that idle equipment should retain it’s value even when worldwide mining activity would decline, because worldwide supply can shrink at the same time as demand. This is unlike shipping or oil drilling were ships/rigs can have 50 years of useful life. A long useful life means that supply is basically fixed, and that day rates can vary wildly without any apparent relation to replacement cost. The more often something needs to be replaced, the more relevant replacement value is.

Emeco’s rental fleet is classified on the balance sheet as a non-current asset as part of PP&E, but I think it makes more sense to view it as inventory and a current asset. It’s equipment that you can move around the world, and use for whatever you want to get out of the ground. Their equipment is probably easier to turn into cash than for example the inventory of AEY. If you classify Emeco’s P&E as a current asset the balance sheet looks as follows: 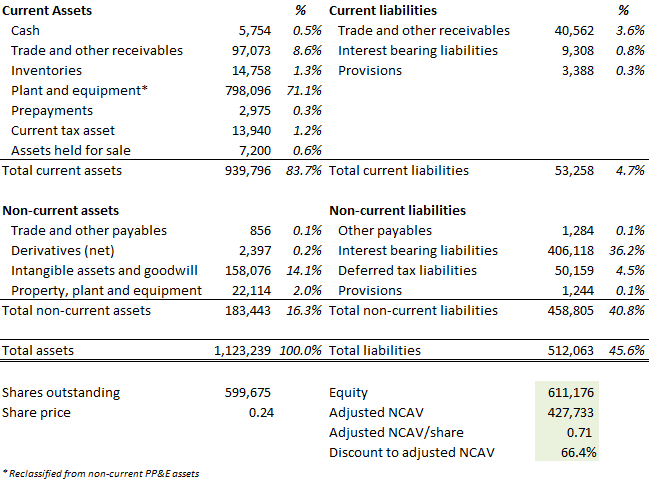 Looking through the asset lens Emeco appears to be really cheap. It is trading at a 66% discount to adjusted NCAV, and at a 0.24x P/B ratio. The biggest part of Emeco’s asset value is derived from their equipment, and I believe that this is most likely worth book value based on the gains the company was able to book on asset disposals the past 5 years. In every single year since 2009 the company has sold a sizable amount of used equipment, and always slightly above book value:

Based on the consistent history of selling equipment above book value I think that Emeco should roughly be worth tangible book value. This would imply a share price 3x above current levels. A concern is the high amount of debt that Emeco is carrying, but given the big discount there is still a reasonable margin of safety. The equipment could be marked down by 33% and Adjusted NCAV would still equal today’s market cap.

It’s not enough that the debt is backed by substantial tangible assets. The debt maturity profile, and the ability to meet debt covenants are quite important too. While I do think that their unused equipment can be converted to cash relative easily there are limits to their balance sheet flexibility. Selling ~A$50 million worth of equipment in a year is presumably easier than selling >A$100 million, and there certainly most be some correlation between their utilisation levels and the market for used heavy equipment. If they would sell their idle equipment today at book value they could generate enough cash to extinguish all debt, but it’s very unlikely that that would be possible.

They don’t have to worry about debt maturities: at the end of FY13 the average debt maturity profile was 4.9 years. Meeting the gearing and interest cover covenants might be closer though. They managed to temporarily amend the covenants to the following ratio’s:

We can also use the expected EBITDA level as a check to see how much equipment Emeco needs to sell in the worst case scenario to sufficiently reduce the outstanding debt:

Since debt needs to be reduced by A$100 million in FY14 in the worst case scenario they need to raise an additional A$62 million selling idle equipment. They have already sold A$24 million in the first 4½ months, so this seems a very doable amount. And with approximately A$400 million of idle equipment on the balance sheet there must the potential to quickly raise some money if they are willing to offer a discount. I can imagine that they could delay some capex as well, and perhaps liquidate some working capital. Emeco isn’t in the best position, but they should be able to handle their debt load.

I like buying companies were insiders own a significant amount of equity, but that’s unfortunately not the case at Emeco. The company does appear to have a good incentive plan though, and bonuses are mainly based on net profit after tax and return on capital. Emeco also has a good history of paying significant dividends to shareholders, and buying back shares. In the past 5 years they returned a total of A$171 million to shareholders. Looking at the past might not be the most useful exercise since the CEO is brand new.

What’s perhaps a negative – and certainly in hindsight seems to have been ill-timed –  is the large amount of money the company has been spending on (growth) capex in the past few years. Net capex (after asset disposals) in 2013 was A$129 million and 2012 was a record year with A$282 million in net capex. Paying down some debt would have been preferable.

The relative low insider ownership creates the risk that management doesn’t have the right incentive when the situation deteriorates further. They could for example be inclined to dilute shareholders by raising additional equity if they think that will save their job. The flip side of that coin is that a high debt level also forces management to do the right thing. Repaying debt is the #1 priority: there is no room to allocate capital to something stupid.

There is a lot more that could be said about Emeco, but what truly matters is that they own a lot of idle equipment, and that equipment can probably be sold close to book value to manage their debt level. That’s all there is to this idea…

Rating: on a scale from one to five I’m going to give this idea two stars. Their debt is a problem – that can probably be solved – but it reduces flexibility, and it might cause a lot of trouble in some scenario’s. Emeco is a bit risky, but potentially also high reward.

31 thoughts on “Emeco Holdings: a net-net in disguise”