I don’t think I achieved these returns by taking on an above average amount of risk. I’m at the moment 95% long and 10% short for a net long exposure of 85%, and the majority of the companies I own have a rock solid balance sheet. But the only good test is a real-life bear market, and while I’m curious to know how I would perform in such a scenario I’m certainly not hoping that I’m going to find that out in 2014. Ignoring the short positions and netting the pair trade in the Prisa capital structure my portfolio currently looks as follows: 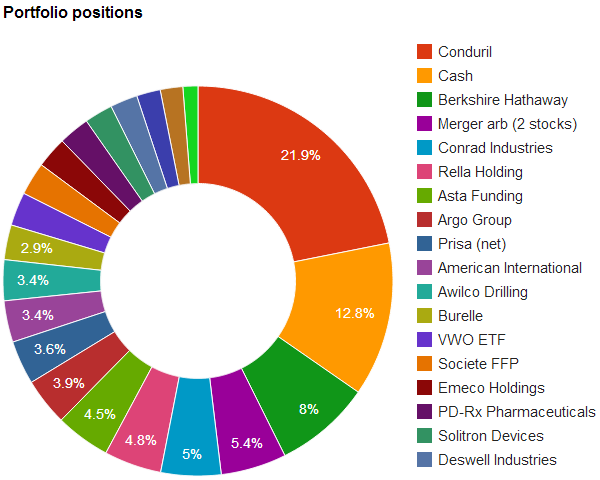 One of the biggest contributors to the positive performance was Conduril. I made this my largest position earlier this year when it was trading at €30/share, and since then the market price has risen to €51/share making it an even bigger bet. Despite the run-up in price I think it’s still by far the cheapest company I own so I’m not yet thinking about selling. Conduril wasn’t the only company that contributed to the positive result, although there were also a handful of stocks that cost me money:

Not a single stock performed truly terrible, although Emeco has been very volatile and was down significantly more before recovering a bit the past weeks. The other ‘big loser’ that I still own is Asta Funding. It’s the first stock I wrote-up on this blog, and the stock price is now back to the same level as two years ago. I think my original analysis wasn’t great, but since the company did create intrinsic value the past two years it’s now a substantially better deal and I’m happy to hold this. The downside is in my opinion well protected thanks to the cash rich balance sheet, and hopefully the upside will take care of itself in 2014…

Long all stocks discussed except those marked as sold