Magix AG is a German software company that has two thirds of its market cap in cash. I have a weak spot for cash rich businesses, especially when they are profitable and are returning significant amounts of cash to shareholders. It’s pretty rare to find this combination because it’s hard to keep a big pile of cash when you return a lot of money. Magix is one of those companies though. They paid big special dividends in 2011 and 2012, and they also have a long history of buying back shares. The share count has been reduced by 30% since 2007, and the company finished it’s latest tender offer last month. Before discussing the company any further lets check some key statistics first:

For a software company Magix appears to be very cheap, especially when we look at the metrics with the enterprise value in the numerator. The company is trading at book value, but since this is a software company there are a lot of intangible assets. Book value is basically a combination of cash and intangible assets with some working capital thrown in the mix. The amount of cash per share is significant: it’s €1.89, roughly 60% of the current share price. An overview of some historical key stats can be found below: 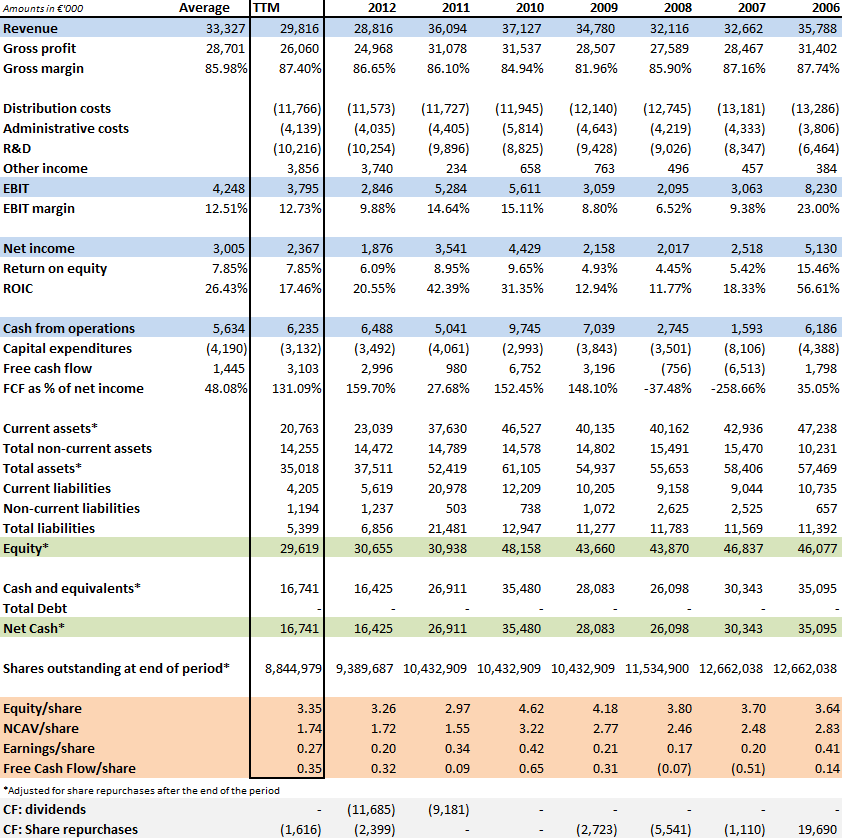 Magix became public in 2006 through an IPO that was used to raise €20 million. This was – in hindsight – obviously done at an opportunistic time: the share price of the company quickly declined from €14/share to less than €2/share at the end of 2008. Without a doubt investors were thinking that they were buying a solid growing software business while reality turned out to be different. That doesn’t make Magix a bad business. Gross margins are extremely high, as you would expect from a software company, and ROIC is high thanks to the asset light business model. While there are a lot of interesting things to note about the historic performance the most important thing is how much free cash flow the company is generating. While the company has an enterprise value of just €11.5 million they generate roughly €3 million in FCF after spending an equal amount on capital expenditures.

This is a bit deceptive though since almost all income last year was the result of the reduction of a royalties provision. Without this one time gain the company would have been roughly break-even. This doesn’t mean that the company doesn’t have any earnings power. they spend more than €13 million/year on R&D: more than the current enterprise value of the whole company. You have to believe that their R&D is a massive waste of money to believe in the current valuation.

Presumably a decent amount of the R&D is spend at the mufin subsidiary that develops new technology to recognize audio signals. The technology could for example be used to recognize what tv-program is playing, and at what point in time, for second screen applications. Magix seems to think that this is a promising new market:

If this is indeed the case remains to be seen, but either the R&D pays off and future revenue and earnings will increase or they can cut back on the R&D and earnings also go up. The Venture segment (that includes the mufin subsidiary) produced a negative income of €1.3 million for the TTM, and this could easily be cut away if needed. A loss making subsidiary that obscures the profitability of the other subsidiary is a classic recipe for undervaluation.

Magix creates multimedia software for the consumer market. I haven’t tried any of their products, but it seems to be relative basic software for tasks such as creating slideshows from vacation photo’s or video’s, digitizing old analog video’s, recording your own music and creating simple websites. It’s the kind of software that you sell PC users that barely know how to hold their mouse… Alright, I admit, that is an exaggeration, but if you are a bit more serious you would be looking at more fully featured software from a vendor such as Adobe. Apparently about 50% of their customers are aged 45+, exactly what I would have expected.

The table above shows a breakdown of revenue by region, and I think this shows that their products aren’t very good. They get two-thirds of their business from countries with German as the official language, and while that seems logical for a German company you have to realize that good software can easily cross borders, and that is getting progressively easier with the rise of online marketplaces. In the long run you have to wonder what kind of future there is for Magix, and how they can compete with companies that can spread R&D costs over a bigger user base. Don’t think being big in Germany is going to cut it in the long run.

Another problem with their business is that they mainly have products for the PC, and that is a market that seems to be in a long-term decline. They do have some apps for tablets and smartphones, but not a whole lot. In addition they have a number of products that are soon to be antique. The market for software to digitize LP’s can’t be getting bigger.

A small part of their business is professional audio and video software. This seems to be a solid product, but it’s a small market. In the last six months just 6% of revenue was from B2B sales, and that not only includes the professional products, but also sales of the consumer software to OEM’s. This is what Magix writes about Sequoia, their pro audio product:

For years, Sequoia has been an integral part of leading broadcast and mastering studios worldwide, including the BBC, German public broadcasters WDR, MDR, SWR, the Vienna Symphonic Library, and Sterling Sound in New York. For sound engineers, music producers, radio journalists, and so on, Sequoia is an indispensable tool for any type of professional media production.

An interesting part of the Magix thesis is what insiders are doing. After the IPO in 2006 insiders owned 50% of the company, and that stake has slowly increased to 72.3% today. They increased the number of shares they own by a small amount, but the largest part of this increase is the result of Magix buying back stock. The company announced in July its intention to buy back another 10% of the outstanding shares, but in 20 weeks time they were able to acquire just 1% of the float on the open market. To speed up the process they launched a tender offer that was completed last month. The tender offer was at a minimal premium to the latest market price and they only managed to acquire another 449,537 shares (the tender offer was for 840,000 shares). The company used tender offers to buy back shares before in 2007, 2008 and 2009.

What’s of course a good question to ask is how the endgame is going to look like. It seems to me that management is trying to buy back their company, although they are not in any hurry. At some point in time I would expect that they will try to take it private again, and that could mean a nice premium for the remaining shareholders. It’s not a problem if this is not going to happen: buying back undervalued shares is already a great use of capital.

One thing that might be a concern in the long-term is what might happen if management is too successful in buying back shares. If their ownership stake reaches the 95% threshold it’s possible for them to squeeze-out the remaining minority shareholders. In a squeeze-out you have to go to court if you don’t agree with the amount of cash management is offering, so you will be in a vulnerable position. Details of the relevant German laws can be found here. Given the problems the company has to acquire a meaningful amount of shares at current prices I don’t think this is a big risk.

I’m not very enthusiastic about the business Magix is in, but you can’t deny that it is still producing a decent amount of money. The company generates roughly €3 million/year in FCF, and that is after significant investments in new software development. R&D spending has averaged around €13 million/year (approx €10 million is expensed while €3 million is capitalized). They need to keep investing in new software to stay relevant, but I think it also shows that the company could remain cash flow positive even if things would really deteriorate. It’s something to keep an eye on though.

How to value a software company with an – in my opinion – uncertain future is a good question. But to paraphrase Buffett (I think): “you don’t have to know a man’s exact weight to know he’s fat”. A business shouldn’t be valued at €11.5 million if it would be able to generate that amount in FCF in a single year if it would simply cut back on R&D spending. While I have been a bit negative in this write-up about the business they aren’t dead yet, and it’s totally possible they manage to keep their place in the market, or that they manage to reach new markets with the mufin product. I don’t think they deserve an EV/EBITDA ratio of 1.5x. If a 4x ratio would be more appropriate you are looking at a company with an intrinsic value of ~€47 million, implying an upside of 66%.

I don’t think Magix is a high quality business, but it’s cheap. With a large cash balance the downside should be somewhat protected, and what’s even better is that management has a long track record of returning cash to shareholders through special dividends and share repurchases. Usually when you buy a cash rich business you have to worry that management squanders the cash on some stupid acquisition, but I don’t think you have to do that in this case. What also helps is that management has a big stake in the business.