Clear Leisure PLC is an AIM listed investment company headquartered in London, but with the majority of its operations in Italy. The historical performance of Clear Leisure has been disastrous and the share price of the company has dropped from 120p in 2010 to just 2p today. This of course didn’t happen without incident. Last year the company for example discovered that one of their key assets, a 73.4% stake in ORH SpA, a hotel and travel company, was basically worthless because of undisclosed debt positions on some African hotels. Clear Leisure had acquired a majority position in ORH SpA, after what they described as a “thorough due diligence process” at the end of 2012. Right…

Luckily management seems to be coming to their senses. The company is looking for a new CEO and to sell some of the larger assets of the company. In anticipation of the sale of the Mediapolis SpA asset they already announced a conditional 2p/share dividend. This attracted my attention since the stock itself is currently trading at the same level. But before discussing this potential dividend, and the other assets that Clear Leisure owns, first a quick look at some key statistics:

The NAV/share number isn’t very meaningful because it is outdated, but even taking into account the loss of ORH SpA it gives a hint that this company might be worth a lot more dead than alive. Given managements intention of selling assets and paying dividends that’s good news. A diagram of the company structure is provided on its website:

As already mentioned ORH is probably worthless, although it could provide some upside if Clear Leisure is able to recover anything in the bankruptcy proceedings. They did recover 14.4 million of their own shares, but this is already incorporated in the number of shares currently outstanding. The core assets that remain are:

Other assets are a 10.0% stake in Ascend Capital, a 67.12% stake in Bibop and a 8.9% stake in Geosim. Since these assets are small and no useful information is provided for a valuation I’m going to assume that these are worthless too, and only focus on the core assets.

Sipiem is the holding company that owns 66% of Ondaland, the biggest water park in Italy. The park received a €7 million investment at the end of 2012 to add a traditional theme park that will allow it to remain open throughout the year. It is currently only open three months in the summer. Since Clear Leisure owns a 50.16% stake in Sipiem they effectively have a 33.1% stake in Ondaland. The latest reported financials look as follows:

Because Clear Leisure and (some of) the holding companies further down in the corporate structure own just partial stakes in the businesses they control you have to be careful to account for the impact of minority interests. Revenues and EBITDA are measures before taking into account minority interests while the earnings and net asset value numbers are (probably!) after minority interests.

Valuing Sipiem at €11.3 million might be a bit too optimistic, but it would be at 12.6x earnings and 5.4x EBITDA so it’s probably in the right direction. In 2012 Clear Leisure bought a 11 percent stake for €800 thousand, valuing the company at €7.3 million. Given that earnings and EBITDA (but not revenue) increased compared to 2011 this might actually be an investment that increased in value. The €7 million funding mentioned earlier was done for a 27% equity stake in Ondaland. This implies that Ondaland is worth €26 million and that Sipiem is worth €17.3 million. If Sipiem is worth between €7.3 and €17.3 million the 50.16% stake of Clear Leisure could be worth between €3.7 and €8.7 million.

Sosushi is an Italian sushi restaurant chain that seems to be growing rapidly. On the Clear Leisure website they talk about 18 restaurants, but when we visit Sosushi’s own website we already see 30 locations. Revenue increased last year by 54% while EBITDA grew with 87%:

Based on this limited disclosure of growth and profitability I think this chain could be worth a decent amount, but a lot depends on future growth prospects. Clear Leisure paid €751,500 to acquire its 50.1% stake, and I’m guess that it’s still worth this much, and potentially twice this amount or more given the impressive growth last year. The other 49.9% was acquired in January this year, but I assume that the value of this part is offset by an equal amount of debt. A valuation for Sosushi between €1 and €2 million seems a decent guesstimate to me.

Clear Leisure is thinking about spinning of their restaurants division: questionable in my opinion given the small size of both the parent company and this division.

Mediapolis is the most interesting asset because the company is in an advanced stage of selling it. Mediapolis owns a plot of land that is earmarked for the development of a theme park, shopping centre and hotel. It also owns some other assets. It has received not one, but two offers for the theme park project. Both offers are contingent on two conditions:

The project land is appraised at €35.6 million while it has €10.3 million of associated debt. The other assets have an appraised value of €4.2 million with €5.9 million in associated debt. In the debt restructuring the company wants to pay creditors the €10.3 million of debt related to the land and €1.7 million related to the negative equity of the other assets. After this transaction Mediapolis would only own the undeveloped land and it would be debt free.

Clear Media announced in Januari this year that they had received an initial positive reply from the court, but a month later the court decided that it needed more information due the complexity of the restructuring plan. The company appears to be confident about the outcome of this process because they already announced a conditional 2p special dividend.

To find the value of Clear Leisure it’s a matter of adding up the various pieces and deducting a number for the amount of debt at the holding company level. How much this exactly is, is a bit of a guess because the latest interim report doesn’t have the necessary footnotes to figure it out. But we know that the company had €2.0 million in convertible bonds at the end of 2012 and €3.5 million of payables for total liabilities of €5.5 million. But since then the company has issued €3.1 million in new debt to buy back debt at a significant discount and approximately a million in liabilities were removed from the balance sheet by issuing new shares (already incorporated in the current number of outstanding shares).

I decided to simply use the amount of debt that was issued last year as the current debt level in the ‘high’ valuation scenario and add an additional million in debt in the ‘low’ valuation scenario. These assumptions give a wide range of outcomes, but when the upside ranges between 66% and 220% I don’t think you need to be overly precise: 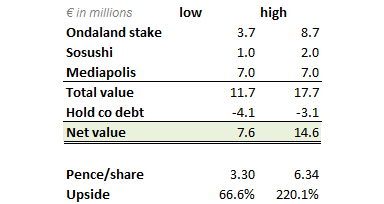 Clear Leisure has a terrible track record, the valuation is imprecise at best, and if the sale of the Mediapolis asset fails intrinsic value/share will probably continue to melt away like an ice cube on a hot summer day.

Having said that: I think that at current prices it’s a attractive bet. It’s pretty likely that they will be able to sell the Mediapolis asset and they already announced their intention to return 2p/share: giving investors a freeroll on the value of everything else. Ondaland and Sosushi appear to be decent assets that could provide a lot of upside. Don’t think it is prudent to allocate a large part of the portfolio to this idea though given the risks involved.

You can find a couple of posts with more info and background at the PhynixManifesto blog.