I exited my position in Magix today. I don’t think it’s a great idea to remain a shareholder. Not necessarily because the outlook of no liquidity is a problem, but because I think the delisting might be the first step in trying to screw minority shareholders. Since my position is pretty small I’m not in a good position to defend my rights, especially as a foreign stockholder. With the share price recovering a bit the past days I thought this was good moment to exit. Despite the huge drop in share price past week I actually made a little bit of money on this investment. Doesn’t mean that I’m happy about this result though…

No position in Magix AG anymore

Magix AG released a short press release today in which the company announces that it intends to delist from the Frankfurt Stock Exchange. Apparently this is legal in Germany without shareholder approval, without appraisal rights and without launching an offer for minority shareholders. The only thing that shareholders get are six months notice…

I’m obviously not very thrilled about this latest development because if I decide to hold the stock it will be totally illiquid: there is no German equivalent of the pink sheets, so it would be (nearly?) impossible to trade. I think small investors should embrace illiquidity, but no liquidity is probably a bridge too far. A delisting also creates more corporate governance risk and is probably going to result is less disclosure to minority shareholders. I’m not very familiar with the laws and regulations in Germany, so if I have a reader that is more knowledgeable w.r.t. to the position of minority shareholders in delisted companies and other related issues I would love to hear from you!

The market reaction to the delisting news has been pretty extreme: shares are down more than 28% today. That could represent an interesting opportunity if you don’t need liquidity, but the big question is of course if you want to remain a shareholder. A delisting could also be the first step in the abuse of minority shareholders…

I exited a couple of positions the past few days for various reasons. Today I sold my stake in Emeco Group because I think that my initial thesis is broken. I bought the company because I believed that the assets would be worth more than the current enterprise value of the business, and that the company would earn enough to manage their debt load.

Based on the latest trading update both now appear to be false. The company announced one week ago that it would close the Indonesian business segment and that they would incur a A$38.5 million impairment charge on their equipment. They have also relocated approximately A$10 million of their Indonesian fleet to Australia. Given the fact that their Indonesian fleet was just A$81 million at the end of this year this means that the impairment was approximately 54% of original book value. If you would apply the same discount to the remainder of their fleet it would completely wipe out equity.

So I think the margin of safety that I thought was there simply isn’t there. I also didn’t like that they had to refinance their debt at a high interest rate to get rid of some covenants. I originally thought they would be able to meet them by simply selling equipment.

I also exited my short in Suntech, and this is something I should have done a few months earlier because at the current low price of the stock the carrying costs of the position are a bit too much (despite the fact that I was synthetically short using a structured product instead of having to borrow shares). The short position returned 56.4% in a bit more than a year time, a result I’m happy with since the leverage of the position was less than one.

When I wrote about the irrational pricing of the Class B shares compared to the Class A shares the B shares were cheaper than the A shares despite the fact that they were superior in almost every way. We are now nearing the automatic conversion of the Class B shares in the Class A shares, and I managed to exit most of my position at a fair premium. The automatic conversion will be at 1.33x A shares for every B shares, and there will be a 24.8% dividend on the B shares as well (payable in A shares).

Calculating the performance of a long/short trade isn’t easy, especially when you have traded a bit and when one leg is traded in euro’s and the other leg is traded in dollars. So the results below aren’t totally accurate. I have measured the gains and losses in the table below compared to the initial value of the short leg (the Class A shares):

I think this might be one of my best trades ever. That the outcome would be this favorable was certainly not a given: if Prisa would have entered bankruptcy I would probably have made just a little, or lost a little. But being able to double your money without significant market exposure is obviously pretty awesome :).

Still long some Prisa Class B shares, and short a few Prisa Class A shares. No position in STPFQ or EHL.AX anymore.

Almost a day trader! A little more than one day after initiating my short on the Allied Irish Banks ADR I already exited my position for a 7.3% gain. The ADR is still slightly overvalued, but since it’s probably going to take one or two months before the ADR is cancelled and you have to pay a 5% borrow fee to short the stock I thought it was a good moment to exit.

What is interesting – and possibly totally bizarre – is that apparently the depository is still allowing holders of the ADR to convert. That this is going on can easily be checked when you look at the 2012 and 2013 annual reports: the number of ADRs has declined from 27 million to 26.5 million during this period. The more interesting question is what people receive when they do convert. Logically you would expect that they get a pro rata share of the underlying cash and equity. But if the comments on this SA article can be believed you can actually still receive the 10 underlying shares. Since the shares are now trading at a higher price than the VWAP price since the depository started liquidating its position this would mean that a lot of value could be extracted from the ADRs at the expense of those who don’t convert. Unfortunately I don’t have a broker that could try this conversion.

No position in ALBYY anymore

I think the graph below is self-explanatory. Note that the share count has remained constant throughout this whole period: insider ownership isn’t growing because of free options. 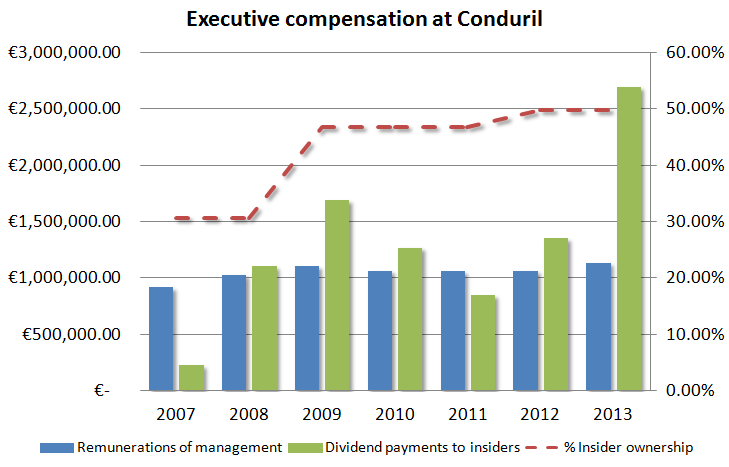