Since it’s the first of July it’s once again time to take a look at the performance of my portfolio. A double digit return in just a half year is a pretty solid result, but I have no illusions that this is sustainable. A bad year will be inevitable, and you have to remember that what matters is not a high arithmetic average return, but a high geometric average. You are not going to get a high growth rate if you also have large negative outliers in your returns. But obviously the results so far are encouraging, also compared to the benchmark:

While I’m happy with the overall performance of my portfolio I’m less pleased with how this result was achieved because things would have looked significantly different without my position in Conduril, and I think I made a couple of mistakes that I shouldn’t have. The graph below shows how my various positions contributed to my year to date performance: 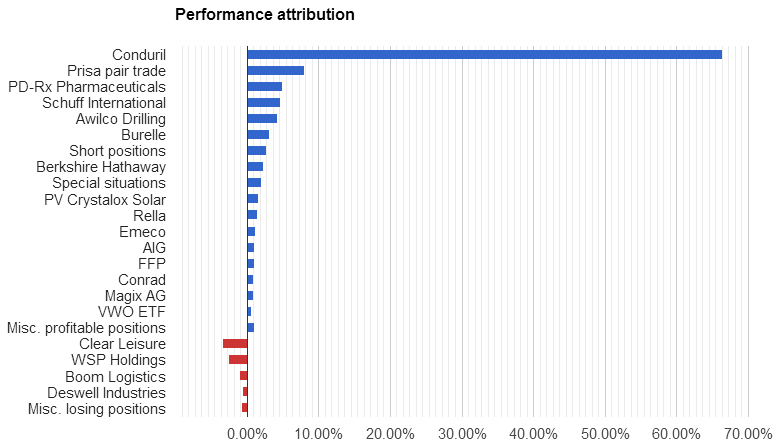 Conduril accounted for a whopping 66% of my profits the first half of 2014. If we would exclude the results of this position the gain of the portfolio would still have been a respectable 11.1%, but that’s a result that’s a lot closer to the benchmark. On one hand it’s good to see that what I perceive to be my best idea is also my best performing position, but on the other hand having a large number of positions/idea’s that appear to be slightly above average is not so great. But that’s probably the reality that I should expect. Great idea’s will be rare to find, and a portfolio that manages to outperform the market with a couple percentage points is nothing to sneeze at. My portfolio currently looks as follows: 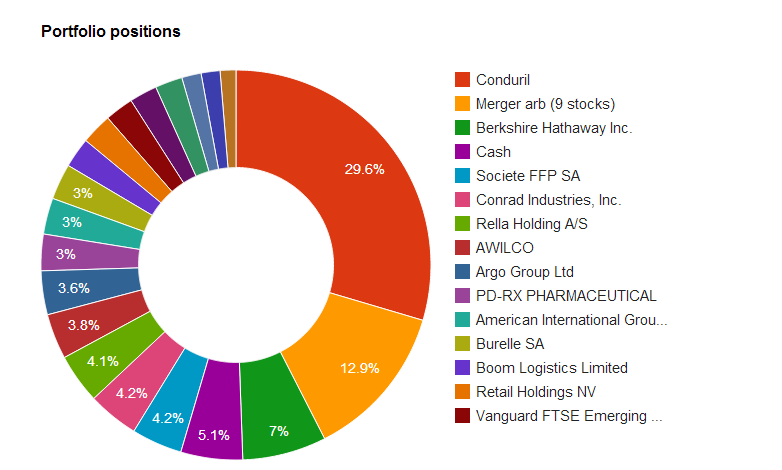 The position that immediately catches the eye is of course Conduril that is almost crossing the 30% level. It was already a pretty big position at the start of the year with a 22% allocation and thanks to the gains in the first six months of 2014 it got only bigger. There has to be a point where I need to start selling simply to manage my risk, and unfortunately it can’t be too far away from the current size. I really hate the idea of selling my cheapest stock with the most potential for further appreciation, but it’s also important to recognize that there are always risks that you and/or the company cannot anticipate and control.

With regards to my mistakes – and I realize this is going to sound very results oriented – but I think my biggest losing positions weren’t that great. I don’t mind that I lost some money on WSP Holdings in the failed merger arbitrage, but there were a lot of opportunities for me to lose less. I could and should have entered in the beginning of the year at a lower price (or not at all), and I probably should have exited earlier as well. I did get the position sizing right though: it was small and as visible in the performance attribution graph the loss is very manageable. But that might also have been a factor in why I neglected the position a bit.

I sized my bet in Clear Leisure a bit bigger, but in this case I also recognized that it was a speculative and risky position. The stock simply might have been a bit too speculative anyway, and I also failed to properly consider how crappy trading and liquidity on the AIM market is. I should have set a higher hurdle to jump over for an idea where it’s hard/expensive to act when you change your mind.