Jewett-Cameron Trading (JCTCF) ended on my research list after I noticed that they repurchased more than 10% of their outstanding shares in the latest quarter. This wasn’t the first time either that the company bought back stock: in the past five years the number of outstanding shares has dropped with more than 40%. Companies that aggressively repurchase their shares are in my opinion very interesting. It usually says something positive about the capital allocation and shareholder friendliness of the management team, and if it’s done below intrinsic value the share repurchases can create a lot of value. Before trying to figure out if this is also the case for Jewett-Cameron some numbers:

Jewett-Cameron is a pretty straightforward business to understand. They operate four segments: industrial wood products; lawn, garden, pet and other; seed processing and sales, and industrial tools and clamps. The lawn, garden and pet segment is by far the biggest and accounts for almost 80% of revenue. The company writes in their latest 10-K that this segment is less sensitive to downturns in the US economy than the market for new home construction. While that might be true the company’s revenue dropped significantly in 2009 and has never really recovered since. But thanks to lower expenses operating profit is back to roughly the same levels as before. See the table below for some historical financials: 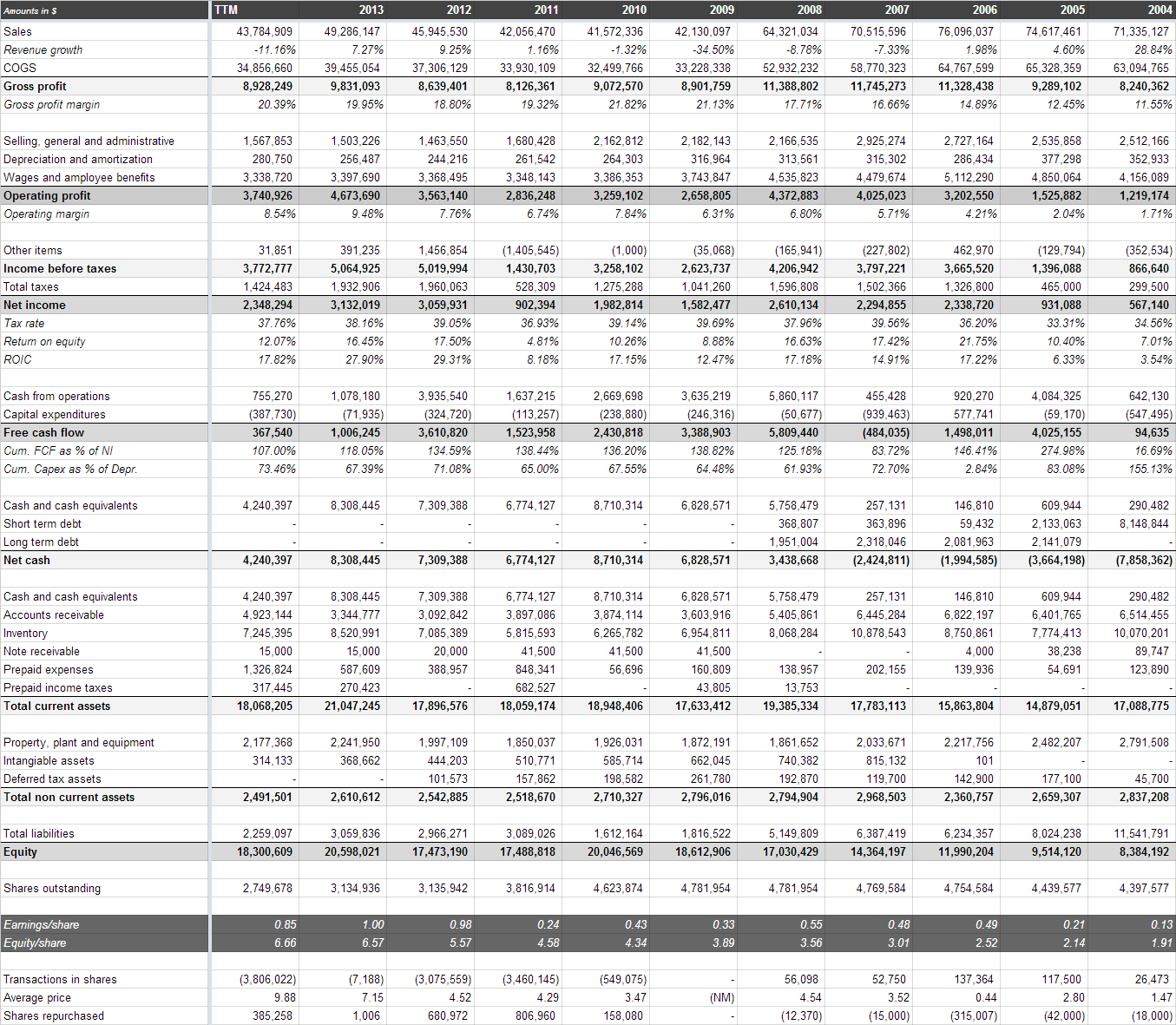 The favorable impact of the shrinking share count is clearly visible when we look at earnings per share. Despite little progress in the business itself earnings per share have almost doubled compared to 2008. When we look at the development of the revenue numbers it’s also clear why the stock has been a poor performer for the past three quarters. Revenue is almost back to the 2009 level, and it now appears doubtful that this company can grow at a meaningful rate in the future.

Because of that I think the most appropriate valuation is to simply take the average operating profit from the past 5 years, apply the average tax rate, throw a 10x multiple on it and adjust for the cash held by the company. This generates the following picture: 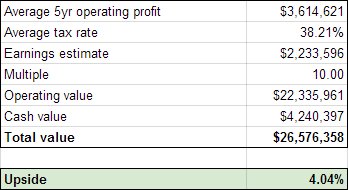 As is visible this valuation indicates that the company is trading at roughly fair value, and the implication is of course that the share repurchases aren’t generating an above average return on capital. It’s in my opinion still an excellent use of cash. Buying your own stock at a 10x multiple basically means that you are generating a 10% return on your money. That’s a lot better than having it linger in a bank account like so many other companies are doing.

Jewett-Cameron is a very interesting company, but unfortunately not very cheap and that significantly reduces the value that is created by buying back shares. Buying back fairly valued shares is in theory a neutral transaction, except that it is usually better than a lot of alternatives (hoarding cash, growth acquisitions and dividends depending on tax situation).

Luckily Jewett-Cameron is not expensive either, and at the current prices it will probably generate a fair return for shareholders. Perhaps that it could be a great idea when you have some specific opinion on how the housing market in the US will develop, and how that will impact Jewett-Cameron. But that’s not a prediction I want to make or can make, and since there is not much of a margin of safety at current prices I’m staying at the sidelines.

No position in Jewett-Cameron Trading at the time of writing.

7 thoughts on “Jewett-Cameron Trading: a cannibal at fair value?”