Clarke Inc is a Canadian holding company that is run by activist investor George Armoyan. Just like Carl Icahn George Armoyan has a bit of a reputation as a bully. He actually got banned from a couple of municipal buildings in Halifax last month because of ‘threatening’ behavior:

“They made me wait for an hour and 15 minutes without giving me the courtesy to come out,” said Armoyan, whose family company, Armco Capital Inc., is one of the largest development firms in Atlantic Canada. “Then all of a sudden I see police guys come over because I was tapping my feet and I was looking agitated and angry.”

The attraction of Clarke is that the company is trading at a discount to net asset value, the company is steadily buying back shares and it is paying a decent dividend. How big the current discount to NAV is is easy to calculate since the majority of assets are publicly traded: 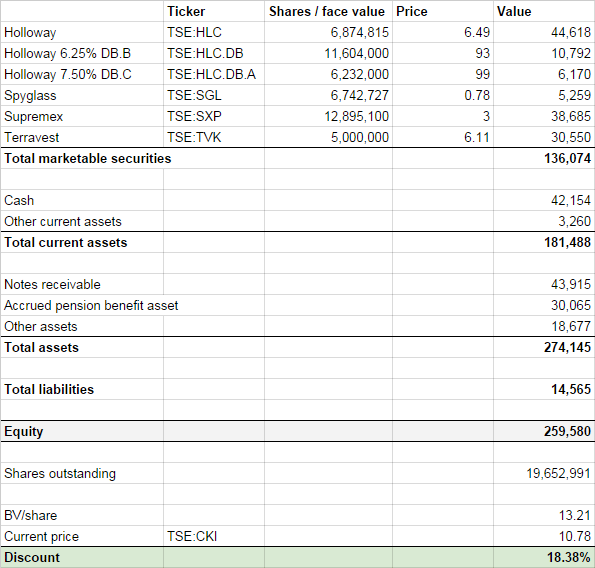 As is visible the company is trading a decent discount to NAV, but a discount less than 20% is ordinarily not enough to get me interested. Unless the investments of the holding company are capable of outperforming the market a holding company deserves to trade at a discount because it has overhead costs and there are usually tax inefficiencies.

Tax inefficiencies seems to be minimal at Clarke because it doesn’t pay taxes on capital gains or dividend income. It might have to pay income taxes when the pension benefit asset is realized. I wasn’t able to figure this out with certainty, but I do think it is probably that they have to pay 31% in income taxes when it is realized (if I have a reader that knows this for sure, that would be nice). Assuming that they need to pay taxes this would reduce NAV by CA$9.3 million.

The negative value of the overhead is a bit though to figure out since the company used to own operating subsidiaries that have their results consolidated. George Armoyan got paid close to a million dollars in pension benefits last year, but since he is now only the chairman of the board and not the CEO that might not continue. But the new CEO is obviously getting paid, they have a CFO and probably some other staff at the holding company level as well. And there is of course an auditor to pay, and I assume they have an office somewhere as well. At least CA$2 million in yearly operating costs is probably an optimistic estimate. Capitalize these costs at a 10% discount rate and we have another CA$20 million liability that is missing from the NAV. If we would include this and the taxes in the calculation the discount would be a meager 7.4%.

The last major component missing from the calculation is whether or not the investment manager is able to generate (positive) alpha. This is something that I usually don’t want to bet on, but in this case it might be reasonable. The latest quarterly contains the following graph: 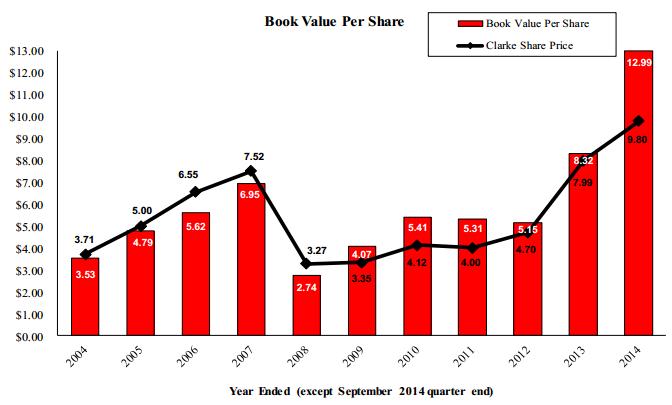 This looks like a pretty decent result, and it is. Book value increased at a 14.3% CAGR while both the S&P/TSX and the S&P 500 managed something closer to 5% during this period. While this sounds pretty impressive I’m actually a bit skeptical whether or not this result is attributable to skill instead of luck. If we ignore the past two years where Clarke posted phenomenal results the company would have performed roughly the same as the S&P/TSX for an eight year period but with more volatility. Not being able to beat the index for an eight year period sounds pretty crappy to me, but I might be overly harsh? It doesn’t inspire confidence.

To be fair: I haven’t included the impact of the share repurchases in my calculations. Buying back approximately 5% of the outstanding shares/year at a ~15% discount (taking taxes on the pension asset into account) should result in a little bit of alpha. It’s not very meaningful though.

Conrad reported results for the third quarter of 2014 last week, and unfortunately it contained a bit of a nasty surprise since revenue was down 9.6% compared to the previous quarter and net income took a bigger hit and went down 34.1%. The backlog also decreased 22.0%. This is obviously not a good development, and not surprisingly management’s discussion of the results have a cautious tone compared to the previous quarter:

Although we are optimistic about the long-term prospects of our business, we also take note of near-term risks. Current declining oil prices and a decrease in demand for tank barges used to transport petroleum products produced from shale plays lead to some uncertainty about our shorter-term demand and margins.

Although bid activity has been good and we are pursuing many opportunities, we have not signed contracts as anticipated which is leading to gaps in our production schedules.

Luckily the drop in earnings isn’t as bad as it looks from the surface. A bit buried at the bottom of footnote #2 we learn that Conrad recorded a $2.2 million provision for unprofitable contracts. This cost is fully recognized as soon it becomes evident while earnings are recognized based on the percentage of completion method. This heavily penalizes the earnings of the current quarter with a cost that should not reoccur (and is not necessarily incurred in this quarter). Without this item earnings would have dropped more inline with revenue: ‘just’ ~13 percent instead of 34 percent.

At the same time management is also seeing new opportunities:

Management continues to engage in a detailed business planning process to identify potential uses of the Company’s cash. Although we have experienced a decline in demand for inland tank barges, we have also experienced increased opportunities to produce different types of vessels for emerging markets. Some of these vessels would be larger, take longer to start production, and take longer to complete than vessels we have constructed in the past, and some may require additional capital expenditures. Management is pursuing and evaluating these opportunities and intends to take them into account in making a recommendation in the near term to the board regarding the use of the Company’s cash.

These new opportunities might also explain why the company didn’t declare a dividend this quarter. The past two years Conrad paid a 2$/share dividend at the end of the year, and while the dividends were not classified as regular dividends I was expecting something similar again since they now have more than $10/share in cash. While a dividend would have been nice I don’t mind not receiving one this year. I do trust Conrad’s management team to do something sensible with the cash, and that is the important thing.