With 2014 behind us, it is of course time for the obligatory year-end portfolio performance review. While one year is a too short time frame (for most strategies) to determine with any amount of certainty if you are able to beat the market it is still better than nothing. Trying to track if you are able to add alpha is hugely important since it determines what the appropriate investment strategy is. Given the low base rate of people being able to add alpha you should be skeptical that someone, who is outperforming, is skilled instead lucky, and that includes yourself. I’m slowly but surely building a decent track record, but with the benchmark up in the double digits for the third year in a row it is relatively easy to look like a genius:

Conduril was (and is) my biggest position with an almost 30% portfolio allocation at the start of July. Unfortunately, it gave away a large part of the gain that it made earlier this year when it dropped 28% from €85/share to €61/share. That’s a pretty strong tailwind to overcome! At the same time, Awilco dropped from more than $25/share to less than $11/share. Other losers in the second half included Conrad, Argo, Deswell Industries, Clear Leisure and Burelle. As a result, my performance attribution graph looks totally different compared to six months ago: 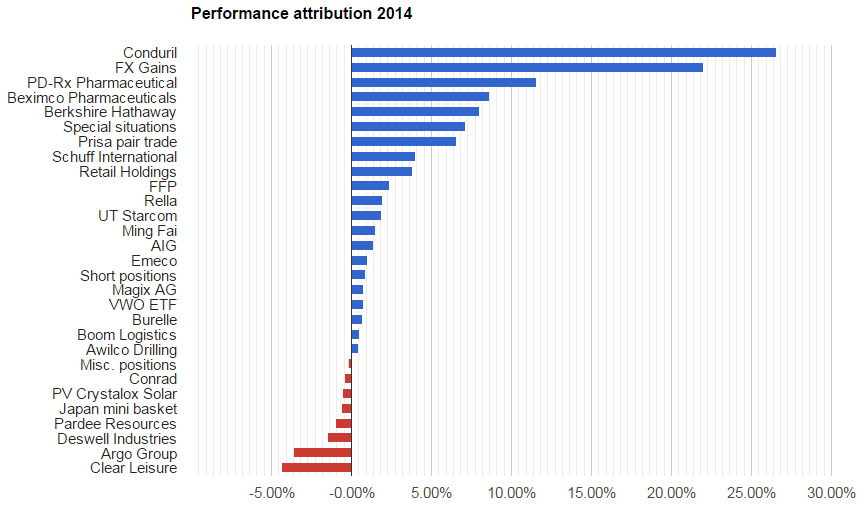 When looking at this graph you have to realize that it isn’t adjusted for position size. While I made the largest amount of money on Conduril the stock actually underperformed my portfolio slightly. What I find encouraging is that I made money on a lot of different ideas. This contrasts with the first half of 2014 when almost all my gains could be attributed to Conduril.

The more independent bets you make the easier it becomes to discriminate between luck and skill. Unfortunately, stocks are never totally uncorrelated, and I think you can make a decent case that my portfolio is mostly long low liquidity and short high liquidity. So perhaps I’m at risk of large losses in certain market conditions and are the above average returns, thus far, just a fair compensation for this risk. I don’t think that that is true, but given the randomness and uncertainty inherent in investing it is not an easy statement to disprove (if possible at all).

I think that my portfolio is currently well positioned for adverse market scenario’s given the reasonable diversification across countries, industries, and companies. My portfolio is at the moment pretty conservative (too conservative) with a long exposure of just 85.7% and a short exposure of 2.7% for a net long exposure of 83.0%. This is however mostly the result of my recent Conduril sale, and I intend to move closer to being fully invested when possible. Unlike many other value investors, I don’t like holding cash given the associated opportunity cost. 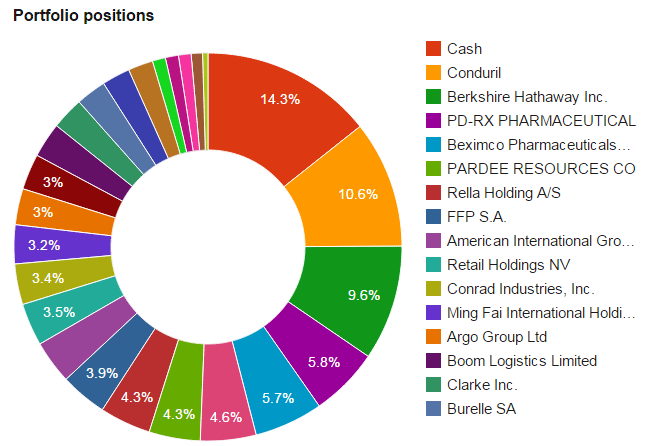 While I probably should add some reflection in this post on what my biggest mistakes were in 2014 I’m not going to do that – it’s getting long enough as it is – but I’m going to discuss why I think my investment in Awilco wasn’t a mistake nor not selling it when it was trading above $25/share. I have seen various people mention this as one of their biggest mistakes of 2014, but I think that is mostly results oriented thinking. Oil suddenly dropping from $100/barrel to almost $50/barrel was a low probability event that I don’t think anyone could have forecast.

Every single stock can be hit by an unfavorable event, and some are more at risk than others. Dropping oil prices were always a possibility, just like rising oil prices. Who knows what could have happened in an alternative world that would have resulted in oil shortages? What would have been a mistake if I would have sized my position in Awilco such that nothing could go wrong. I also don’t think that not selling at $25/share was a mistake. I thought it was roughly fairly valued at that level, and I actually sold some shares but holding a fairly valued stock is in my opinion not a mistake. You will incur transaction costs when you sell, you might be liable for taxes and you get cash in return that earns nothing if you don’t have a good idea on standby. Not selling a clearly overvalued stock: that’s what I call a mistake.