The last week of March was a busy month with several of my portfolio companies releasing their results for 2014. My biggest position is Conduril, and they released their results for 2014 yesterday. As usual the annual report is at the moment only available in Portuguese, the translated English version should follow in a couple of weeks.

Conduril’s performance for 2014 was satisfactory, but there are a couple of clouds in the sky. Their backlog dropped from €750 million at the end of 2013 to just €450 million at the end of 2014, one of the lowest levels in years. Generating free cash flow also proved a problem in 2014. This wasn’t exactly a surprise since the company announced in their interim report that the Angolan government settled a large outstanding receivable with certificates of public debt. But even when we ignore this item we see that working capital is growing while revenues have been shrinking the past years. The good news is that the company announced that it will pay a €2/share dividend this year and that it is still dirt cheap. It’s trading at a P/E ratio of just 4.2x and of P/B ratio of just 0.6x which is a small discount to NCAV.

An updated summary of their financial performance for the past six years is provided in the table below. A large part of the positive differential between other income and other expenses is caused by foreign exchange gains. Probably repeatable for 2015 given the decline of the euro this year, but of course not sustainable in the long-term:

Ming Fai also reported results for 2014. My thesis for the company is based on the fact that the profitability of their core business is ‘hidden’ by two loss-making divisions, but since one of these divisions has been shut down mid-2014 I expected that reported results would soon improve. Reported net income did indeed jump by 67% in 2014 while the dividend was also increased by 29%. While this is, of course, good news there was also some bad news buried in the financials. The profitability of their crown jewel, the amenity segment, decreased while losses in the retail segment only got bigger:

Retail Holdings also reported their 2014 results yesterday. Results for 2014 weren’t particularly impressive, but the company continues to trade at a 40% discount to NAV, announced another $1/share dividend while the long-term strategy is still to monetize the value of its assets. It’s for sure taking a long time, but we get paid to wait and intrinsic value can grow in the meantime. The chairman of the company is pretty optimistic:

I remain optimistic about 2015 and later years. I anticipate a marked improvement in Sri Lanka’s performance, reflecting accelerating economic growth, helped by lower oil prices, an improving agriculture picture, an increase in government salaries, and an uptick in consumer confidence, as well as the launch of a major new financial services initiative. In Bangladesh, a lot will depend on political developments, but the Company’s performance should improve in any case, particularly in the second half of the year, as the Company’s new refrigerator factory begins production, and other improvements now under way impact results. Pakistan and Thailand’s performance should also improve as new initiatives impact results. I expect India to continue to grow strongly. Revenue and profits in 2015 and later years will also benefit from the rollout of the new Cambodian business and from the Company’s ongoing investment in new and renovated shops and in new products, brands and services.

The holding company currently consists of the following assets: 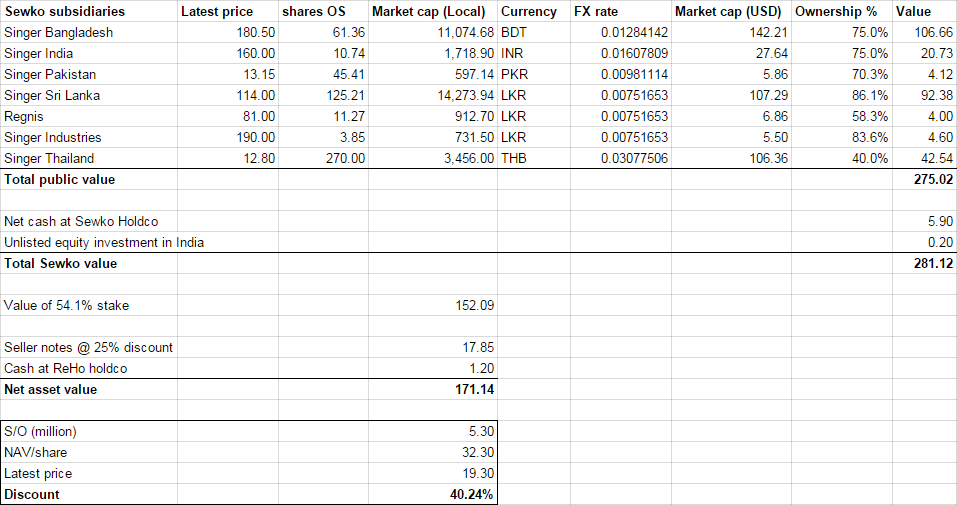 What I also found interesting was the following paragraph in the annual report:

I’m not familiar with the relevant laws in the US. I’m wondering if shareholders that don’t claim their dividends lose the right to receive them after 5 years? And what will happen if the company eventually liquidates? It appears that approximately 5% of dividends go unclaimed, and if this eventually accrues to other shareholders it could be a nice bonus?

Since Rella announced that they would sell their stake in Aller and liquidate it doesn’t really matter what the latest results are. Despite that fact, the annual report did contain a couple of interesting items. The company increased the estimated liquidation proceeds from 77DKK/share to 77.5DKK/share. What I also found noteworthy is that the company renewed their share repurchase authorization. I don’t know if they are going to use it, but it would allow Rella to bet on its own liquidation. Could generate a bit of value for remaining shareholders.