Primo Water’s merger with Glacier Water was successfully completed today. So at least one part of the thesis was right: this was a deal that was not only very probable to close, but also probable to close fast. But the most important part of the story isn’t clear yet: what former Glacier Water shareholders will exactly receive. I think it’s going to work out as expected since in the Consent Solicitation Statement that was mailed just a week ago the company estimated a payment of $12.17 in cash, 0.87 of a share of Primo stock and 0.54 of a warrant to purchase Primo stock. So it appears that the company was indeed being slightly conservative in its earlier estimates since then it was expected a cash component of $12.13/share. I guess we will have some more clarity very soon, but since some shares will remain in escrow for one year it will take some time to know for sure how this deal plays out.

At the end of October Heartland Financial USA (NASDAQ:HTLF) announced that it would acquire Founders Bancorp (OTC:FBCP) in a $29.1 million transaction. No details are known yet about the deal since the press release doesn’t contain any, and the proxy statement isn’t yet available. This could very well be the reason why there is an opportunity, although the low liquidity of Founders Bancorp might be an even bigger reason. The stock trades on the pink sheets, and for some reason it is impossible to buy it using Interactive Brokers, TD Ameritrade or SogoTrade. In the end I managed to buy it using Binck, a small Dutch broker.

At first sight the deal doesn’t look super attractive. The press release mentions a $21.87/share consideration while the stock is now trading at $21.40: a spread of just 2.2%. What makes it interesting is that the deal is a 70% stock and 30% cash transaction. While the proxy statement for this deal hasn’t been released we can simply look at earlier deals that Heartland Financial has done to figure out what are likely the most important terms. In previous deals the amount of HTLF stock to be issued was based on the 20-day VWAP of the stock in the days preceding the close of the merger. So while HTLF is up 16% since the deal was announced this doesn’t increase the per share consideration.

What does offer an opportunity is that in previous deals there was a cap and floor on the VWAP price used by Heartland Financial to compute the number of shares that will be issued in the merger. For CIC Bancshares deal the cap was +15% and -15% compared to the price the day the deal was announced, and the Premier Valley Bank deal had the same cap and floor. With Heartland Financial up 16% since the Founders Bancorp deal was announced this cap has most likely been reached, and offers at this point an unique opportunity. When Heartland Financial drops from the current level we get more HTLF shares so the consideration remains effectively $21.87/share, while if HTLF goes up more we profit directly. In other words: we are getting a free call option on HTLF by purchasing FBCP.

We can make a rough approximation of the value of this option by throwing the following variables in a Black-Scholes option calculator:

A final complexity is that the press release mentions that the payment per share is subject to certain adjustments, without mentioning what kind of adjustments these are. Based on previous deals this is probably an adjustment if tangible equity of Founders Bancorp suddenly drops below a certain level. I don’t think this is a big deal. If book value suddenly ends up a lot lower it means there are some hidden cockroaches in the bank, and if it wouldn’t result in a lower takeover price it would otherwise probably result in a failed deal. It’s the kind of tail risk that is almost always there in a merger arbitrage.

So I think that what we have here is simply a merger that is just being ignored by the market, not a merger that is exceptionally risky. Therefor I think the current spread is way too high, and Founders Bancorp is an attractive addition to my special situations portfolio.

Exactly five years ago I started this blog, an eternity in the blogging world. I follow dozens and dozens of value investing blogs, but most of them disappear just as fast as they appear. I guess everybody has different goals and expectations when they start a blog. My main goal of starting a blog was to become a better investor. I thought that writing down why I make buy/sell decisions would force me to act more rational because I know that my reasons will be scrutinized by my readers. Writing something down while knowing that people will read it is useful in itself, but getting actual feedback is also quite valuable. I have changed my mind more than once on an investment thanks to readers knowing more than me.

A bit more unexpected is that I found the blog also a great tool to generate new ideas. A lot of the ideas that have been published on this blog have originated from like-minded readers that wanted my input on a certain idea, or were just happy to give a good idea as a sign of appreciation. So keep those idea’s coming, and I’ll continue blogging for another five years!

This year seems to be the year of the attractive merger arbitrage idea’s. After Kahala and Glacier Water there is now a third deal that I think has a limited amount of risk, but a double digit upside. American Farmland Co (NYSEMKT:AFCO), an agricultural farmland REIT,  is being acquired by Farmland Partners Inc (NYSE:FPI), another farmland REIT, in an all stock deal. Shareholders will receive 0.7417 shares of FPI for every share of AFCO. With FPI trading at $11.49 while AFCO is trading at $7.53 the spread is a juicy 13.2%.

Why the spread is this big is a question I can’t answer. Unlike the earlier mentioned deals this is a simple transaction with no difficult to value consideration, and while both REITs have a market cap around $150 million the shares of both companies are quite liquid. There is also no regulatory risk, nor is there financing risk, so the only real risk that remains is that shareholders could vote the deal down. Given that this is a merger between two small REITs I think it’s a deal that makes sense simply to get some scale benefits, but based on the market reaction of Farmland Partners on the day the merger was announced not everybody was enthusiastic.

On the day the deal was announced the stock went from $11.10/share to $10.42/share which is 6.1% drop. It’s not a great market reception, but it’s also not so big that I think it’s likely that the deal will be voted down. It’s quite common for the acquirer to drop a bit when a deal is announced, and usually it doesn’t cause a problem. In addition, the FPI stock has now more than fully recovered, although that might have more to do with the Trump market rally.

In case the deal gets voted down the downside is not disastrously high. On the day before the merger was announced AFCO was trading at $6.04/share. If it would fall back all the way to that level it would represent just a 19.1% drop, and it probably would go down less since the company would receive a sizeable ($6 million) break-up fee, the market in general has been going up since the deal was announced, and it’s positive for AFCO shareholders that management is willing to sell the company.

So it seems like that the market is pricing in an almost 50% chance of failure for this deal which seems excessively high. This deal going through is not a sure thing or a 99% thing. But I think the correct odds should probably be around 90% or 95%. One possible reason that I can offer for the spread being so big is that shorting Farmland Partners is not practically possible. There are almost no shares available for borrow, and the fee rate is close to 20%. My hypothesis is that most shares are hold by parties that don’t lent out their shares (probably a lot of retail investors in a farm REIT) and as a result arb’s cannot hedge their FPI exposure. But it’s totally possible that I’m missing something else here. What do you think?

Author is long AFCO, no position in FPI

I recently trimmed my position in Beximco Pharmaceuticals (LON:BXP) a bit since the discount between the share price in Dhaka and London has shrunk from the original 60% to 39% at the time of writing this. However, it remains my biggest position, so I continue to follow the stock closely. The company reported results for the third quarter of 2016 today. The press release doesn’t contain anything besides the raw financials, but those numbers look good.

Revenue grew with 11.2% compared to the same quarter last year while EPS grew with 22% from 1.04BDT/share to 1.27BDT/share. Note that my per share numbers are slightly lower than those reported by Beximco Pharma, because I’m already accounting for the stock dividend. The shares are currently trading ex-div for the 5% stock dividend, but probably because the dividend hasn’t formally been approved by shareholders (the AGM is the 19th this month) the new shares aren’t yet recognized in the financials. Even with the higher number of shares the stock remains relative cheap: trading at a 9.9x P/E-ratio while it has good growth prospects. Compare this to Dhaka where investors are valuing the same shares at a 16.4x multiple. 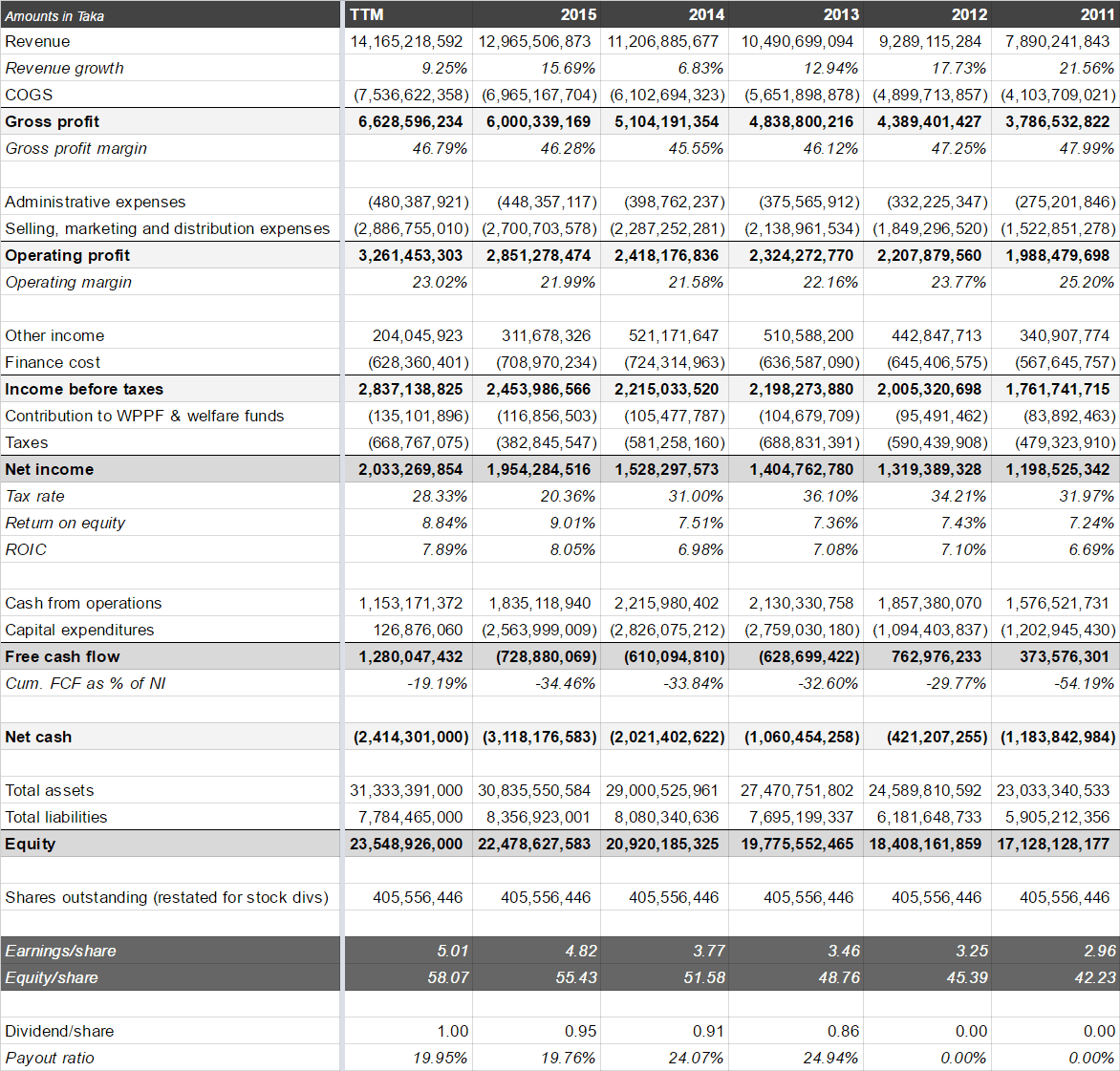