MTY Food Group (TSE:MTY), A Canadian company that franchises and operaties quick-service restaurants, announced on the 25th of May that it would acquire US-based Kahala Brands (OTCMKTS:KAHL). The transaction will double the size of MTY Food Group and values Kahala Brands at roughly US$250 million. The market has reacted very favorable to the transaction, that is described by analysts as “transformative” for MTY since it will give the company a big presence in the United States besides the already established position in Canada. Since the announcement the share price of MTY Food Group has increased by more than 25%.

Kahala Brands is presumably a company that few investors knew before this transaction because it is traded on the pink sheets, it doesn’t publish financial information (it’s a so called dark company) and insiders control 93.12% of the outstanding shares. It’s a stock that sometimes didn’t trade for months, and because the Kahala Brands didn’t release financial information investors were pretty clueless to how much it was worth. In April this year it traded as low as $10.75/share, valuing the company at a P/E ratio of just 1x. Now that there is a merger it is suddenly clear how much it is truly worth and the deal valued Kahala at $149/share. Since a part of the merger consideration consists of MTY shares the implied value has increased to $159/share in the past two weeks.

Unfortunately it’s now way too late to acquire Kahala Brands at a 1x PE-ratio, but there is still a very juicy spread between the current market price of $130/share and the merger consideration of $159/share. This is a spread of 22.5% which is huge for a deal that faces no regulatory risks and it should close in two months time (the closing of the transaction is estimated to occur within 75 days after the announcement on May 25). With insiders controlling 93% of the outstanding shares the shareholder vote on July 21 will be a formality. Financing is currently being arranged for the part of the deal that MTY cannot pay using cash on hand and the issuance of shares. Since the market has responded favorably to the announced transaction it is reasonable to expect that obtaining financing will be very easy.

I think the spread is so big because Kahala Brands is a name that is so small and off the beaten path that just a few investors that specialize in merger arbitrage have bothered to take a look. Secondly the value of the merger consideration is not immediately clear. The proxy statement refers to the $149/share value (that is based on a MTY price of CA$35.68/share instead of the current CA$44.86/share). In addition to that we have to continue reading the proxy statement all the way to Appendix C to find out how the merger consideration is calculated exactly. The computation of the estimated closing value is as follows: 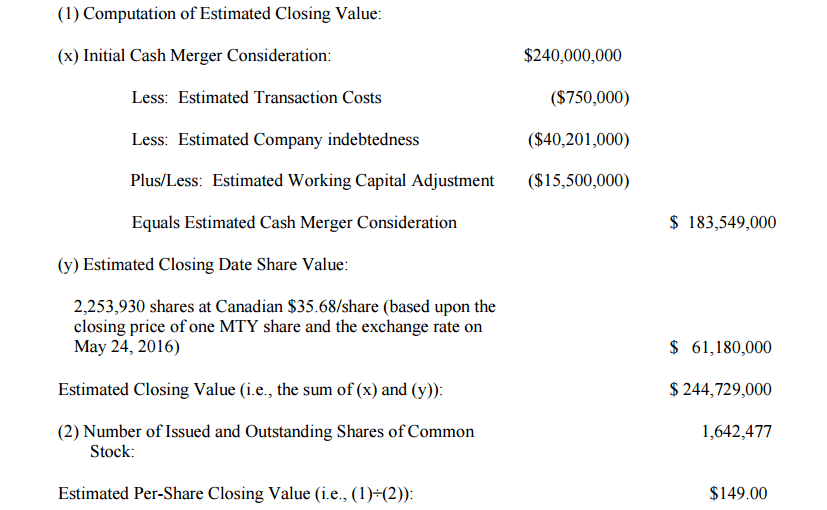 As visible in the above computation the cash portion of the merger consideration isn’t a fixed amount, but it is subject to various adjustments based on among other things the amount of debt and working capital that Kahala Brands will have at the time of the acquisition. So this introduces an element of uncertainty, and perhaps this is a factor that is contributing to the huge spread. I don’t think we have to be very worried though that the cash portion of the final closing value will be materially less than this estimate because these kinds of estimates are usually conservative. If you overestimate it you might get sued, but if you underestimate it and the final consideration is actually higher everybody will be happy. In addition to that, with insiders owning the fast majority of the company, they will have every incentive to make sure that this equation will have a favorable outcome when the deal closes.

Kahala Brands is I think the juiciest merger arbitrage idea I have come across this year. This is a deal that is almost certain to close, and not only that, it should close fast as well. Because of that I think a reasonable spread would probably something like 2%, maybe a bit more. The current spread of almost 22.5% is simply insane. Of course, there is some uncertainty about the final closing value of the merger. I don’t really believe that this is a good reason for a higher spread though since the current estimate could be just as likely (if not more likely) too low as too high. Since I think the risk/reward ratio of this deal is highly favorable I have made Kahala Brands one of my largest positions.

18 thoughts on “Kahala Brands: the merger arbitrage idea of the year”