Coincidentally, Black Earth Farming isn’t the only farming company in the Russia region that hit my radar this month. Before stumbling on that merger idea I was already looking at Industrial Milk Company. Despite its name, the company is mainly focused on raising crops. Its assets are located at the other side of the border, in Ukraine, and it has roughly the same size as Black Earth Farming while focusing on the same mix of crops. So I think the transaction is a nice data point that can act a bit as a sanity check on our valuation. I started looking at Industrial Milk Company based on a tip from a reader, who described it as having a normalized P/E ratio of 2x. While investing in Ukraine isn’t without risk, that’s certainly cheap enough to arouse my interest. Before we continue discussing the company in more detail, some quick statistics first:

Based on these statistics the company doesn’t immediately looks like a screaming buy, but there are a lot of moving parts that impact the income and balance sheet statements. Industrial Milk Company has the Ukrainian Hryvnia as functional currency while using the US dollar as presentation currency, and as a result it has been incurring large FX losses the past years. Since its assets are mainly land and machinery while it sells most of its production internationally these losses are presumably mostly accounting issues, not real economic losses.

In addition, the company recognized a $16 million loss in the trailing twelve months because it loaned money from the IFC that came with a warrant agreement that allowed IFC to claim $21 million if it would not exercise the warrants. With the warrants having a strike at $6.45/share while the stock is currently trading at $2.48 they obviously went for the cash payment. Bit weird accounting wise in my opinion, but certainly shouldn’t be a recurring issue. Because of this additional liability net debt stayed stable the past nine months even though the company generated a good amount of cash flow: 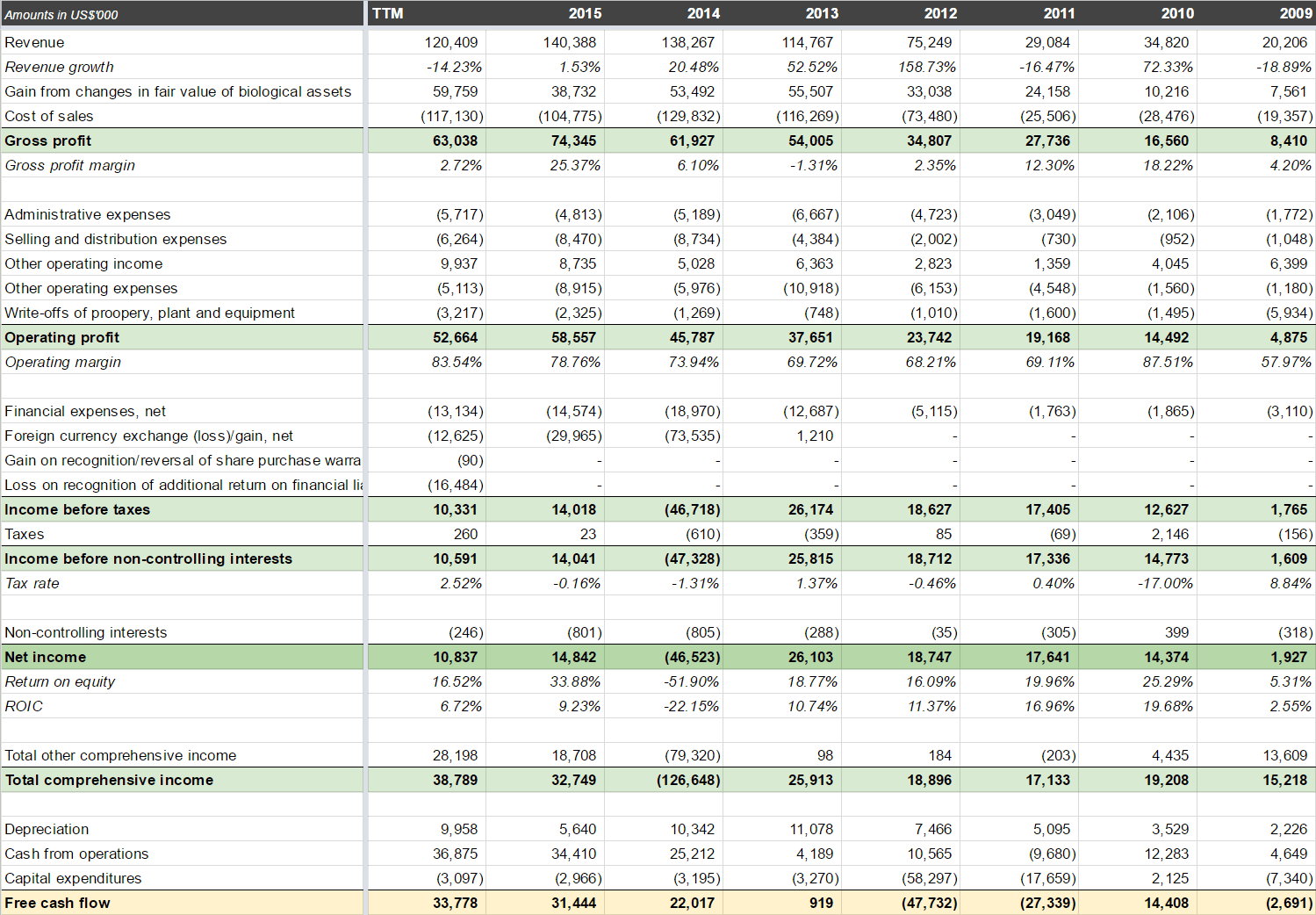 Normalizing earnings by ignoring FX losses and adding back the “Loss on recognition of additional return on financial liability” is tempting to do (the company does this, see for example page 5 here), but based on the amount of free cash flow the company is generating I think that is a too optimistic approach. To be honest, I have a bit of trouble figuring out where the earnings disappear. Since the company is valuing their biological assets at fair value there is a large non-cash component to earnings, and part of that disappears as a non-cash element of “cost of sales”, but inventories, biological assets and receivables aren’t really growing. Guess that must be because of the FX losses?

So instead of using earnings, I’m inclined to look at free cash flow as the best way to value the company. But that’s also a bit tricky, since cash generated from operations hasn’t been very stable historically. The past three years have been solid, but before then results have been more mixed.

As a starting point I will take TTM cash from operations of $36.9 million, add back interest expense of $13.1 million and subtract depreciation of $8.5 million. Current capex is below depreciation, but I have no reason to believe that that is sustainable. It might even be too low if the book value of the PP&E is artificially low due to the FX losses. This gives a total cash flow that is available to the whole firm of $41.5 million. Now the big question is what kind of return should investors require here. Industrial Milk Company is not some save western company, and that is reflected in the interest rates that the company pays on its USD loans that are between 10 and 12%. Add an equity risk premium of something like 6%, and we probably should require a return of roughly 17.5% on unlevered equity. That would mean that the whole company is worth $237 million. Subtract $91.9 million in net debt and we arrive at an equity value of $145.2 million: implying that there is roughly 85% upside from the current market price. Not bad, but also not as high as you would have hoped if the starting promise is a 2x P/E ratio.

We can use the Black Earth Farming as a bit of a sanity check of what the company should be worth as well. Some statistics side by side, and the implied upside:

The financial statements of IMC might be difficult, but when you buy a farm in the end not a lot of variables matter. How much land you buy (as measured by surface area) and how many crops grow every year on it (measured in tons and/or dollar value) is basically everything you need to know. And based on this I think my simplistic free cash flow model is pointing in roughly the right direction. Just based on hectares the upside potential isn’t that big, but IMC is a lot more productive based on sales volume and total revenue. With 1.5x more equipment, 1.5x times higher production volumes and 1.4x times higher revenue I would say that IMC in an optimistic valuation is maybe roughly worth 50% more than Black Earth farming: so $300 million. After accounting for the debt that would mean an upside potential of 168%.

Industrial Milk Company is for sure not expensive, but at the same time I’m not yet totally convinced that it is a great buy. If you take a leveraged company and value it based on the acquisition price of a comparable almost anything will look great. Based on free cash flow it is still a decent deal, but I’m worried that basing my valuation on just the past twelve months is also too optimistic. Historically, the conversion of operating earnings to cash hasn’t been great. So I’m still a bit on the fence if I should buy it or not. The upside is there, but it isn’t insanely big and at the same time I have a bit of troubles fully grasping how the accounting works.

What do you think?

Author has no position at the moment