A reader whispered the name Stalexport Autostrady SA (WSE:STX) in my ear. This Polish company used to be an importer and exporter of steel products (hence the first part of the name), but in 1997 it obtained a 30-year concession to operate a 61KM stretch of the A4 as a toll road between Katowice and Kraków (respectively the 10th biggest and 2nd biggest cities of Poland). The steel business was sold more than a decade ago when Atlantia SpA (BIT:ATL) took a majority position in the company. Atlantia is an Italy-based operator of toll roads and airports in various countries with a €22.5 billion market cap while Stalexport Autostrady is worth just €225 million at the moment. Atlantia holds 61.2% of the outstanding shares, but it’s just a tiny tiny sliver of their overall business.

Toll road between Katowice and Kraków on Google Maps

Conceptually, understanding a toll road business is easy. The costs you have are mostly fixed: road maintenance and operating the toll booths. How much money you make is a direct function of how many cars use the road, and how much toll you ask. It’s usually a pretty good business to be in because most people have no real choice to use your road if they want to get quickly from point A to point B, and no-one is realistically going to build a competing  road in the same direction. In this case we know that the concession will end in March 2027, so this is the kind of situation that screams for a discounted cash-flow model to estimate intrinsic value.

Before we start building a DCF-model it’s a good idea to first take a look at the historical financials, and especially the balance sheet. There are a couple of big items on there that are important to understand. I have color-coded them in one column: 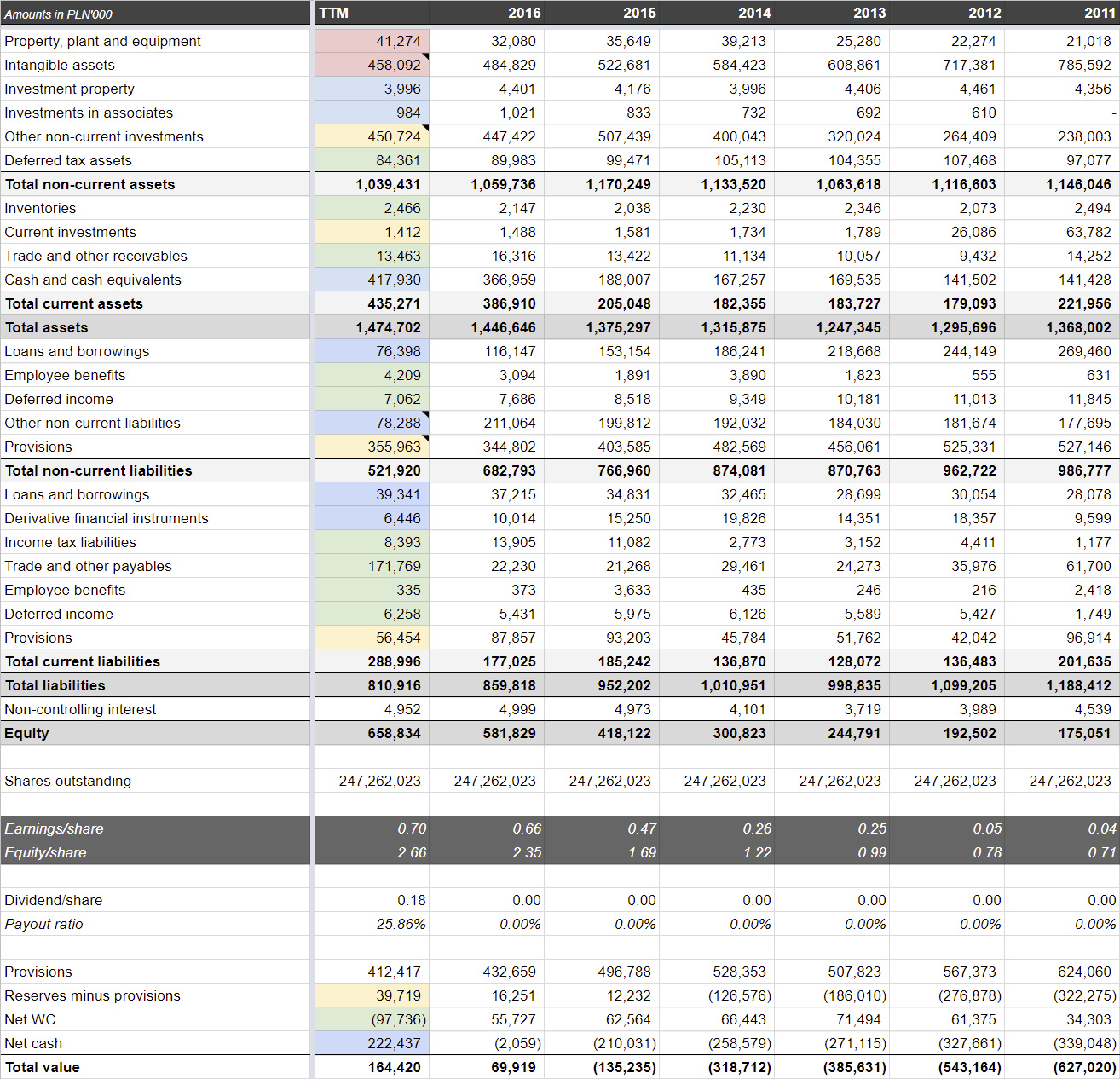 The assets colored red are basically the operating assets of the company, and the concession itself (the intangible assets). As you can see the value of the concession drops every year, and is expected to be zero in 10 years time. Maybe the physical operating assets will have some residual value, but this part of the balance sheet isn’t very important.

More important are the yellow colored cells. On the asset side these are mostly labeled “other non-current investments” while we have various provisions at the liability side. These two items cancel each-other almost out, and that is no coincidence. The investments are “cash reserved for capital expenditures” while the provisions are the estimated costs of mandatory capital expenditures (with the concession also came the obligation to maintain/upgrade the road). This is very handy for our DCF-model. We don’t have to worry about modelling capex: we can just assume that these balance sheet items will cancel each other out in 10 years time. To check that this is sort of reasonable we can compare the implied annual capex/year with historical capex levels. Total provisions are PLN412 million which would imply roughly PLN41 million of capex/year versus a seven year average of PLN46.5 million. This is a small gap to begin with, and it will be a bit smaller because the provisions are discounted while the investments will also generate a certain return (and we have some excess investments to begin with). I also think it makes sense to assume limited capex close to the end of the concession.

The green and blue cells are closely related, and basically represent how much excess cash/assets the company has at this point in time. They do have some debt, but they have been paying that down rapidly in the past years. Note that the “other non-current liabilities” also represent a very debt-like liability since they are concession payments that have to be made to the Polish state. This amount went down by a large amount compared to 2016, but that at the same time “trade and other payables” saw a huge increase. As a result net working capital turned negative, but this should be a temporary situation. They are basically paying down debt, and they now have roughly PLN60 million in excess cash while holding PLN60 million in positive working capital as well if we normalize the situation. 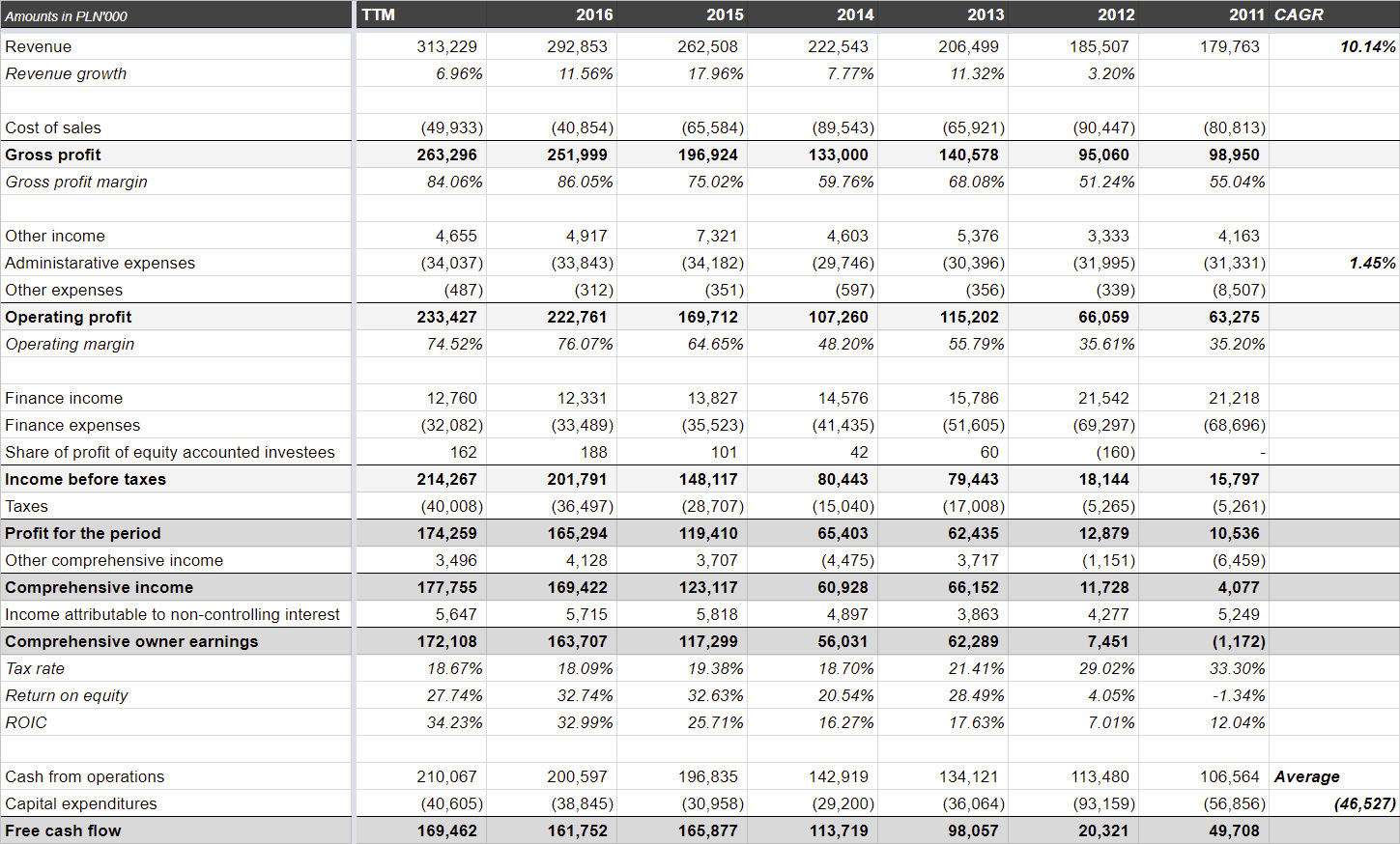 Looking at the income statement is useful, but we have to know what we are looking for. Earnings are sort of meaningless (except for the fact that they determine taxes) since we don’t care about the depreciation of the concession, or the variability in earnings because of lumpiness in roadworks. Stalexport Autostrady doesn’t really have a meaningful “cost of sales”. A large part of the cost of sales are the amortization of the concession and changes in the valuation of the provisions, and costs related to roadworks. Therefore, it doesn’t move based on revenue, and as a result higher revenues are resulting in higher operating margins. Because of that, the business is at the moment throwing off cash.

We mainly care about the amount of operating cash flow. The most important driver of the amount of operating cash flow has been the revenue, that has been growing at an average rate of 10% per year. If you dive in the companies annual reports you see that this growth is driven by a combination of higher traffic and higher tolls. The maximum amount of toll that the company can charge is capped in the concession agreement, but the rate for passenger cars can be increased by 40% before hitting it while the rate for trucks has 18.3% of upside left. Tolls from passenger cars represent roughly two-thirds of all toll revenue.

Now that we sort of know the current state of the business, and understand what is important, we can use that to make some predictions about the future. I have made a very simple cash flow model based on the trailing twelve month operating cashflow. I have adjusted this number for changes in working capital, and also deducted the dividends paid tot non-controlling interests (and assumed that this amount will remain the same in the future). The value that the models spits out depends on four major assumptions:

The interaction of the first two are really the crucial ones. Because we don’t model increases in costs and overhead while revenues grow the amount of operating cash flow that the business generates the next ten year will just explode. If you look back at the historical results that doesn’t seem to too crazy: this is exactly what we see happen in the past results.

Without further ado, the model:

If these assumptions are reasonable, we find that Stalexport Autostrady should be capable of generating roughly PLN3.2 billion of operating cashflow with a net present value of PLN1.9 billion using a 10% discount rate in the next 9.5 years. Since the current market cap is just PLN945 million this gives us a large margin of safety, and if we increase the discount rate to find the same present value as the current market cap we need to use a whopping 27.4%.

If we input zero revenue growth in this model we get undiscounted cash flows of PLN1.7 billion for a discounted value of PLN1.1 billion. So basically the market is pricing the toll road as if revenues will suddenly stop growing, something that I think is unlikely to happen with an asset like this that has so much pricing power. And even if that turns out to be the case, getting paid 10% per year is nothing to sniff at in today’s low interest rate world.

To cut directly to the chase: Stalexport Autostrady seems to be valued very attractively compared to its expected cash flows in the next 10 years. According to my, admittedly very crude model, the stock should be trading at roughly twice the current level. It’s quite possible that a 10% revenue growth rate will turn out to be a too aggressive assumption, but since expected returns are adequate even with a zero growth rate I think there isn’t a whole lot that can go really wrong here. A toll road (concession) must be one of the more stable assets one can own, so I’m pretty excited to be able to buy this at such a high yield.