Almost a day trader! A little more than one day after initiating my short on the Allied Irish Banks ADR I already exited my position for a 7.3% gain. The ADR is still slightly overvalued, but since it’s probably going to take one or two months before the ADR is cancelled and you have to pay a 5% borrow fee to short the stock I thought it was a good moment to exit.

What is interesting – and possibly totally bizarre – is that apparently the depository is still allowing holders of the ADR to convert. That this is going on can easily be checked when you look at the 2012 and 2013 annual reports: the number of ADRs has declined from 27 million to 26.5 million during this period. The more interesting question is what people receive when they do convert. Logically you would expect that they get a pro rata share of the underlying cash and equity. But if the comments on this SA article can be believed you can actually still receive the 10 underlying shares. Since the shares are now trading at a higher price than the VWAP price since the depository started liquidating its position this would mean that a lot of value could be extracted from the ADRs at the expense of those who don’t convert. Unfortunately I don’t have a broker that could try this conversion.

No position in ALBYY anymore 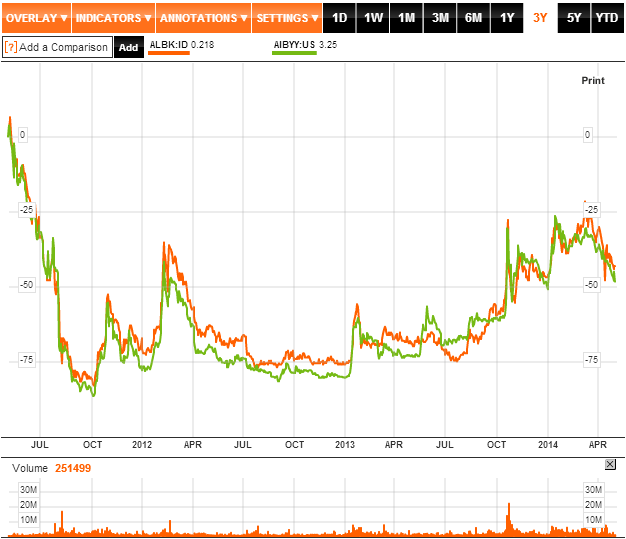