After my post on the Atlas Energy merger arb/spin off a lot has changed in just a few days because the carnage in the MLP land has continued unabated. This also has had big effect on the implied new Atlas Energy Group stub price that has tumbled from $4.21/share to $0.42/share. This is however a bit of a deceptive figure since it does not account for the merger risk inherent in buying the stub. We can estimate the merger risk by looking at the NPL/NGLS deal that is codependent on the ATLS/TRGP deal, and the deal spread has grown together with the carnage in the sector. If we adjust for the merger risk we get the following price: 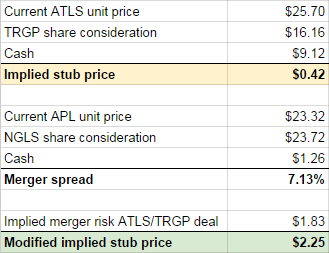 The estimate of the merger risk is of course just that, an estimate, because while both deals have the same probability of completion the downside risk might not be identical when the deal fails. I don’t think this difference is material though, although the ATLS deal might have a bit more risk since a larger percentage of the price is paid in cash. But we also get paid a whole lot more than the 7.13% of the APL/NGLS deal. If we only look at the value of the ARP LP units that the new Atlas Energy Group owns we already get a value of $2.26/share:

In addition to this we also get:

I honestly don’t know exactly how to value all these various interests, but when you get a bunch of potentially valuable assets basically for free I think this almost has to be a good bet with a positive expectation. So I have initiated a small position yesterday. Anything else than a small position is probably not wise/doable though since you need to tie up a lot of capital, and you get a lot of deal risk as well. You could theoretically hedge the deal risk to some extent by shorting APL and buying NGLS, but that would require even more capital.