Argo Group announced today the results of the tender offer I talked about previously. As I sort of expected slash hoped, the tender offer was undersubscribed, and as a result the company is accepting all 8.1 million tendered shares at the 26p/share maximum. A great result since the stock was trading around 15/16p before the tender offer was announced. Even though the company bought the stock at a pretty decent premium, the tender offer was accretive to NCAV/share. The big question is whether or not I should try to re-initiate a position in the stock, or that I should be happy to have been able to exit without having to face the ridiculous bid/ask spread on the London AIM market. It’s still trading at a pretty sizable discount to NCAV, but at the same time insiders are also increasing their control of the company. Their stake jumped from 52.7% to 63.7%, and if they would exercise their options for 4.3 million shares they get to 74.8%. Having 75% of the votes is for example enough to delist a stock from the AIM market, so corporate governance, never Argo Group strongest point, might become even more a risk.

Because of the long holding period my annualized return on my Argo Group position, ignoring some opportunistic buys and sells I made throughout the years, is sort of disappointing. It’s certainly not terrible, but a 10.8% internal rate of return is also not great:

My oldest position in my portfolio is Argo Group. I bought my first shares not long after starting this blog in 2012 at 14.69p/share and while there have been a couple of dividends since, and the opportunity to buy more at significantly lower prices, the stock hasn’t exactly been a home run with a current price around 18p/share. Nevertheless, the company remains very cheap, trading at roughly a 50% discount to net current asset value. Argo’s management has recognized this, and reduced the number of outstanding shares with 30% since 2012. But at the same time this has cemented their control over de company as well since they now control 52.7% of the outstanding shares.

Last week Argo announced that it is launching a tender offer to purchase between £2.0 million and £2.5 million worth of shares in a Dutch auction action with a price range between 18p/share and 26p/share. If you don’t have a position yet in the company you can stop reading here, because the offer is only open to shareholders who held their shares on the record date of 6 March. But since I already own the stock I had a decision to make.

Argo Group has a net current asset value of 36.5p per share so I’m absolutely not interested in selling at 18p/share. But at 26p I think it’s a reasonable deal. I get paid a 50% premium to the latest market price, and the company would still be purchasing shares at a 30% discount to NCAV. I’m okay with a deal that’s a win-win for both parties, and at that price the discount is basically split “fairly” between exiting shareholders and remaining shareholders. By tendering at the highest price of the range there is of course a risk that none, or not all my shares, will be accepted in the tender offer, but I think that’s a risk worth taking. If the tender offer is completed at a lower price it would provide a nice boost to NCAV/share anyway, and most likely the stock price will follow. And most importantly, at 26p I’m selling it cheap enough already!

A sort of interesting twist in the tender offer is the fact that the company can pick if they want to buy back £2.0 million worth of shares or £2.5 million worth of shares. At a price of 18p that corresponds to 50% to 60% of the float while at 26p it corresponds to a percentage between 35% and 43%. Given that it’s such a big percentage of the float, I expect that it’s quite likely that the tender offer will go at the maximum of the range. But because the company has the ability to scale back the number of shares they have to buy I do think it’s important to not tender low with the expectation that it will not really matter in the end result. 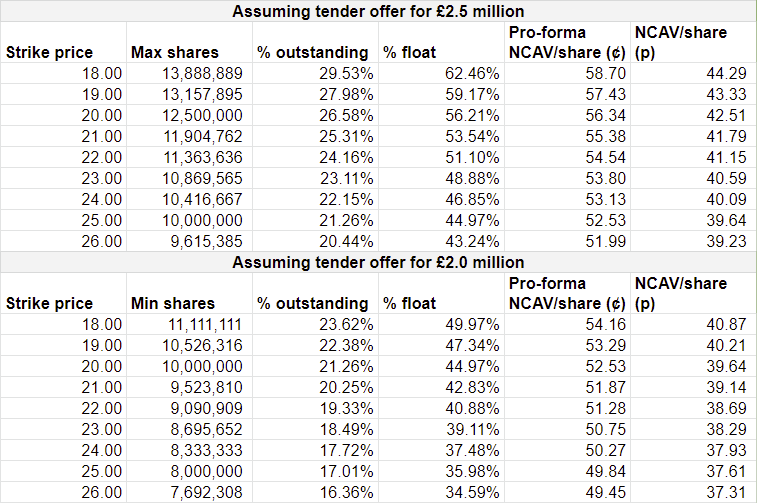 Long Argo, tendered my whole position at the maximum price

Argo Group, a small alternative asset manager trading in London on the AIM market, is one of the first stocks I wrote about when I started this blog. I bought the company in the first days of 2012 and owning this stock has been a frustrating experience ever since. Thanks to a good 2016 I’m now basically back at my starting point. I bought the stock at 14.69p/share and today it trades at almost the same price at 15.37p/share. I did get two 1.3p/share dividends in the meantime for a total return of 22.3%. Pretty pathetic for a more than five year holding period in one of the biggest bull markets in human history!

While 2016 was a good year it seems that for now the business will continue to muddle through. In the 2016 annual report to company acknowledges once again that they don’t have sufficient assets under management to be profitable without earning performance fees (and this year even with some performance fees the operating profit was negative). But a plan to liquidate the company is absolutely not on the table: they are looking for an accretive acquisition and working on increasing AUM (something they write about for years, but are so far never able to do).

So why am I continuing to hold this stock? Simple: it was very cheap and it is still very cheap. The stock is now trading at a discount of 53.7% to net current asset value, and that’s huge! And it’s not like they are hemorrhaging cash. Last year they had a small operating profit, and this year a small operating loss. While the discount alone is enough of a reason to own Argo they also have an off balance sheet asset that could be quite valuable. Argo has a bad debt provision of US$6.4 million for management fees receivable from the AREOF real estate fund. This fund has a negative equity position, but according to Argo’s management these debts are expected to be fully recoverable: except that the timing of the payments is uncertain and unknown. I’m not exactly that optimistic, but last year the fund managed to pay back US$2.8 million, so there might be some truth there. Given that the book value of Argo is just US$20 million the bad debt provision could be pretty significant.

When you look at the historical financials below it’s also clear why the stock price hasn’t done much the past five year. After some bad news in 2014 and 2015 tangible equity/share is now basically back at the same level as five years ago: 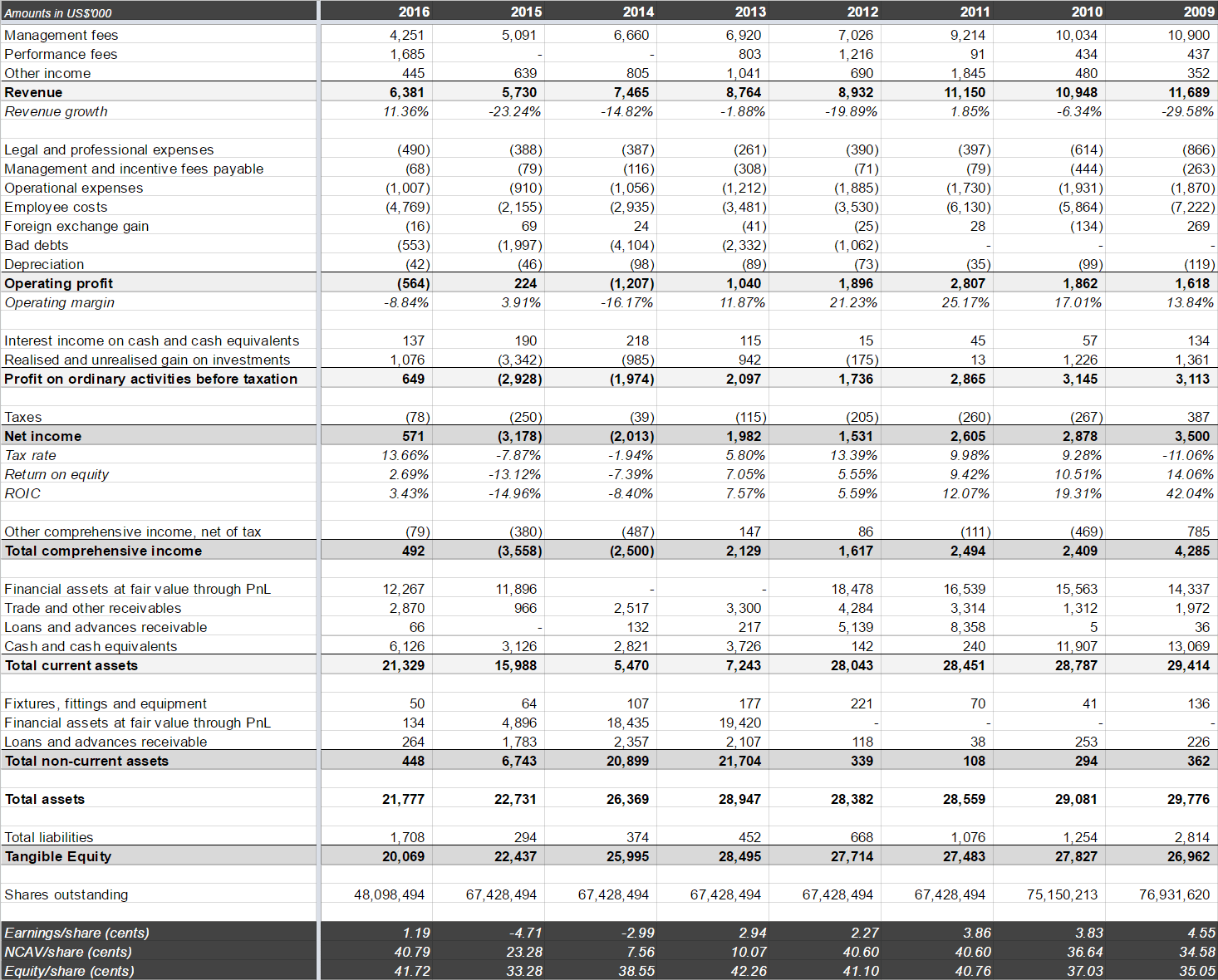 So for now I will hold this stock patiently, but I’m not yet sure how long I should continue to do so. I have owned this now for more than five years, and I can’t wait forever… at the same time: if I would encounter this stock today for the first time I think I would still hapily buy it, so why not continue to hold it?

Today Argo Group announced that it would start a second share repurchase program. The first program, in which the company managed to buy back 28.1% of the outstanding share capital, was completed in July. In the second program the company is looking to spend £2.0 million, the same amount as in the previous program. With 48.4 million shares that remain outstanding and a share price that has been steadily moving upwards this year to 16.25p this would be enough money to retire another 12.3 million shares: 25% of the share capital and 50% of the float. We’ll have to see if the company will be successful in doing that. I was very surprised at the amount of shares they managed to buy in the previous program, so perhaps they can surprise me again. Since the stock is still trading at an almost 50% discount to NAV a successful repurchase program could increase intrinsic value materially. 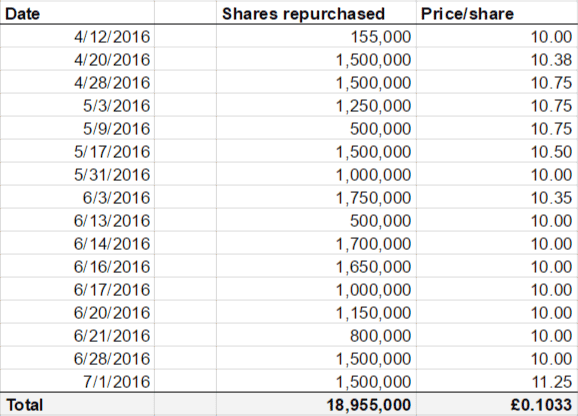