Today I’ll be looking at Argo Group, a small asset management firm that runs several emerging market funds. The company is trading for significantly less that net current assets, is profitable, paying a healthy dividend, and buying back shares. It’s listed on the AIM market in London, but reports results in USD, so all numbers in this write-up will be in dollars unless otherwise noted. Some key statistics of the company:

The biggest attraction of the company is the balance sheet. The biggest items are 10.25M in cash, and 15.72M in investments while the market cap is 15.25M: roughly a 40% discount. The 15.72M in investments are all in “The Argo Fund”, the main fund of the company. The company last reported for the period that ended 30 June 2011, and the value of these investments most likely dropped since (The MCSI Emerging Market index is down 15%). The company does not disclose the holdings of the various funds. If we would apply a big discount of 30% to the value of the investments we still have a company with 20M in assets trading for 15M.

That discount is not directly huge, but the best thing about Argo is that unlike most net-nets it does have a profitable business that should have significant value as well. It’s not a pile of cash doing nothing, or a company burning cash. They currently have almost 400M in AUM. Traditional asset managers trade on average at 2.5% of AUM. If we discount the value of the AUM with 15% we would get a business value of 8M, add back the already discounted 20M of assets and we get a conservative valuation of 28M versus a market cap of 15M.

This valuation is pretty pessimistic since Argo Group is a hedge fund with a 2+20 fee structure, making the AUM way more valuable than those of a traditional asset manager that might have an 1~1.5 percent fee on AUM. With a more hedge fund like multiple of 10% of AUM the company should be worth 32M, and with 20M in assets we would get a valuation at 52M. This is too optimistic though since most funds are significantly under the high water marks, and it’s questionable how succesfull the company will be in attracting new assets (more on this later). The company disclosed that at the end of 2009 the Argo Fund needed to increase NAV by 51% reach the high water mark. It gained 12% in 2009, and 8.5% in 2010, and possibly dropped in 2011, so there is still a long way to go before they will start earning performance fees again. The following table provides an overview of the various funds the company runs, and the AUM:

While checking some multiples is a nice way to get a ballpark figure for the business value I prefer looking at the actual cash that the company is producing: that is what matters in the end. The table belows shows the income statement for the past 3 years: 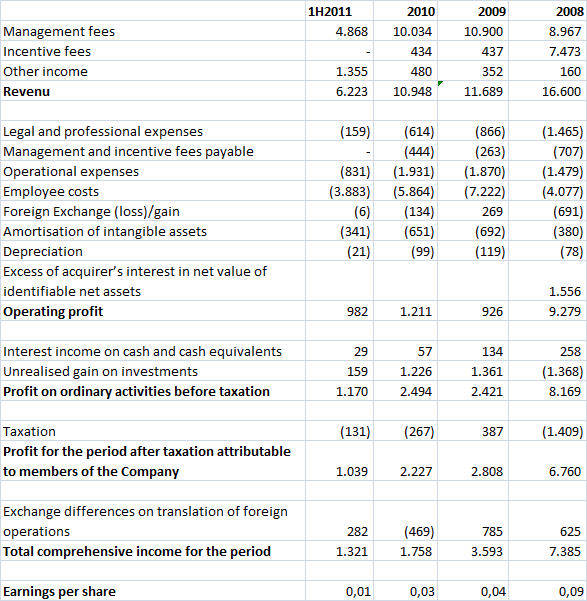 The income statement clearly shows how management fees have dropped after 2008 as a results of NAV/share dropping below the high water marks. The company has remained consistently profitable though, and there are some items that make things even better. The company has a significant amount of intangible assets on the balance sheet, and the amortisation reduces the reported operating profit, but it does not influence the cash flow. There have also been significant legal costs, but these should be something of the past. The company reported on 7 Jun 2011 that the plaintiff that initiated litigation against the company would not appeal, concluding the matter in favor for Argo (more about the back-story later).

If we would remove these costs from the picture, the company would be generating a free cashflow of 2.5M per year. Throw in a conservative 8.5 multiple on those earnings and we get a business value of roughly 21M: accidentally almost exactly between the 8M and 32M estimations based on AUM.

Why is it cheap?

Usually a stock is cheap for a good reason. For Argo that reason can be found in it’s history. The company was founded by Andreas Rialas in 2000, and sold to ACMH in 2007 for 50.46M GBP (6M GBP in cash, remainder in ACMH shares). Unfortunately for the Rialas brothers the ACMH stake was not worth much. The founder, Florian Homm, promptly quited in a spectacular fashion that resulted in the stock price crashing down with more than 90%. Besides that it became also apparent that he stuffed various funds with worthless illiquid OTCBB/pink sheet stocks, and manipulated the stock prices. He has been charged in the beginning of 2011 by the SEC for “portfolio pumping”.

The Rialas brothers were obviously not happy that their funds got in the mess Florian Homm created, and in 2008 the Argo business was quickly demerged from ACMH. Since the brothers had a 33.2% stake in ACMH, they only got back 1/3 of their original business as well (they currently hold 36%). ACMH itself was taken private by the Rialas family with a tender offer of 2.5p a share (it traded as high as 576p before all the troubles). Because Argo was briefly part of ACMH, it was sued by a major investor in the ACMH funds. The court dismissed the claims of the plaintiff, and the company released 7 June 2011 the follow update:

Further to the Company’s announcements of 1 April 2011 and 12 May 2011, the Company is pleased to announce that it has learned that The Cascade Fund, LLLP (“Cascade”) will not appeal the order of the Colorado court issued on 31 March 2011 dismissing its claim against the Company.

This development concludes this matter.

So it seems that Argo can finally leave the past behind. There is my opinion no reason to believe that the Rialas brothers had anything to do with what happened at ACMH, and that we should expect that Argo is heading towards a similar future. They got burned just as badly as investors in the company and it’s funds. It serves as a good reminder that a risk of fraud is always a possibility though.

What will happen with the cash?

Unlike most net-nets the company is actively creating shareholder value by buying back significant amount of stocks, and paying a big dividend. The company paid a 1.2p dividend per share this year (giving it a 9.2% yield) and in addition they also cancelled 8.5% of all outstanding shares. The latest regulatory news items reported at the LSE are all significant share buy backs.

Also positive is that management and share holder interests are aligned. Not only do the brothers have a 36% stake in the company, the directors and employees have 5,900,000 options outstanding that have a strike at 24p. Twice the share price when they were granted, and still 65% below the current share price. It would dilute current share holders by almost 9%, but given the strike I don’t see that as a negative.

Argo is an obscure company with a troubled past, but with the litigation out of the way there is less risk, less money is wasted on lawyers, and maybe they will finally be able to attract new AUM. But even if that’s not the case the company is very cheap based on both book value and cash flows, and best off all management is incentivized to create shareholder value, is paying a big dividend and buying back stock. It would be nice though if they disclosed more information, such as fund holdings and current NAV.

On a scale from 1 to 10 I give the stock a 8.5: the downside is well protected thanks to the balance sheet of the company, management interests are aligned with shareholders and they are using the cash productively. Liquidity is very limited though.

Wexboy has two good posts (part one, part two) online with his thoughts on ARGO.L.