Itasca Capital (CVE:ICL) is an interesting company that offers a creative way to get asymmetrical and leveraged exposure to Limbach Holdings (NASDAQ:LMB). Itasca Capital is the new name of Kobex Capital that was taken over by activist investors last year. After repurchasing roughly 50% of the outstanding shares in a tender offer the company invested substantially all its assets in the most senior securities of 1347 LLC, a holding company that owns various parts of the Limbach Holdings capital structure. Limbach Holdings is a former SPAC that acquired an “integrated buildings systems provider” that manages, according to themselves, all components of mechanical, electrical, plumbing and control systems, from system design and construction through service and maintenance.

On Seeking Alpha there are a number of decent articles that argue that Limbach is currently moderately undervalued and on VIC there is a write-up that argues that Itasca is substantially undervalued. If you want some background information I suggest reading those articles, because I will start straight with the valuation of the company.

Itasca’s main asset is a stake in 1347 LLC. This holding company owns 400,000 Limbach preferred shares with a par value of $25 that are convertible in 800,000 common shares. The preferreds were issued half a year ago when the SPAC transaction closed and have an interest rate of 8% for the first three years, 10% for the following two year and 12% for the last year after which they will be redeemable. I have valued the preferreds at par plus the value of the conversion option as calculated by a Black-Scholes model. In addition to the preferreds 1347 LLC has a large stake in the common shares and two small warrant positions with a $11.50 strike and a $15.00 strike. I have valued all the options/warrants using a volatility of 30% to estimate fair value. The $11.50 strike warrants are also publicly traded (ticker: LMBHW) and are almost exactly traded at this level:

With the warrants valued it’s easy to compute the value of 1347 LLC itself:

Itasca doesn’t own the whole holding company though, they own $10 million of the Class A shares that accrue interest at 1%/month and after the other share classes are paid they are entitled to 44.44% of the remaining profit. Based on the current value of Limbach, and taking into account that 8 months have passed since the securities were issued the waterfall of the profit distribution looks as follows:

With this waterfall and the total value of 1347 LLC we can calculate what the current value is of the Class A shares that Itasca owns. The value is simply the value of the priority amount plus 44.44% of the remaining value, after subtracting the preferred claims of the other equity classes. Accounting for some small assets and liabilities at Itasca NAV/share is US$0.89: 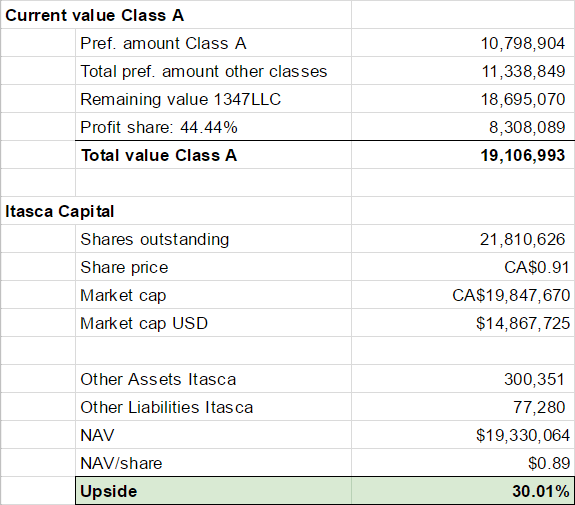 With an upside of just 30% the picture is completely different from the VIC write-up that estimates more than 100% upside. There are various reasons for this difference, the big one being the inclusion of $13.5 million of debt at the 1347 LLC level and accounting for the accrued interest at the other share classes.

While 30% upside might still sound attractive to some I would argue that in reality the picture is a bit worse. Because the lower level share classes also have interest that accrues before the profit share is paid the amount of debt that has priority will grow in time. After 5 years (when the Class A shares can be redeemed) the value of the B, C and D classes will have grown from $10.5 million to $16.8 million. In addition: 1347 LLC has to pay more interest on its own 13.5% debt than it is being paid on the Limbach preferred shares which means it will incur an additional $3.8 million in liabilities. The result is that if Limbach would be at $13.50 in 5 years time the upside isn’t 30%, but just 6%. What is nice to see though if we plot the value of Itasca after a 5 year period with various prices for Limbach that the asymmetrical nature of the bet becomes quite clear: 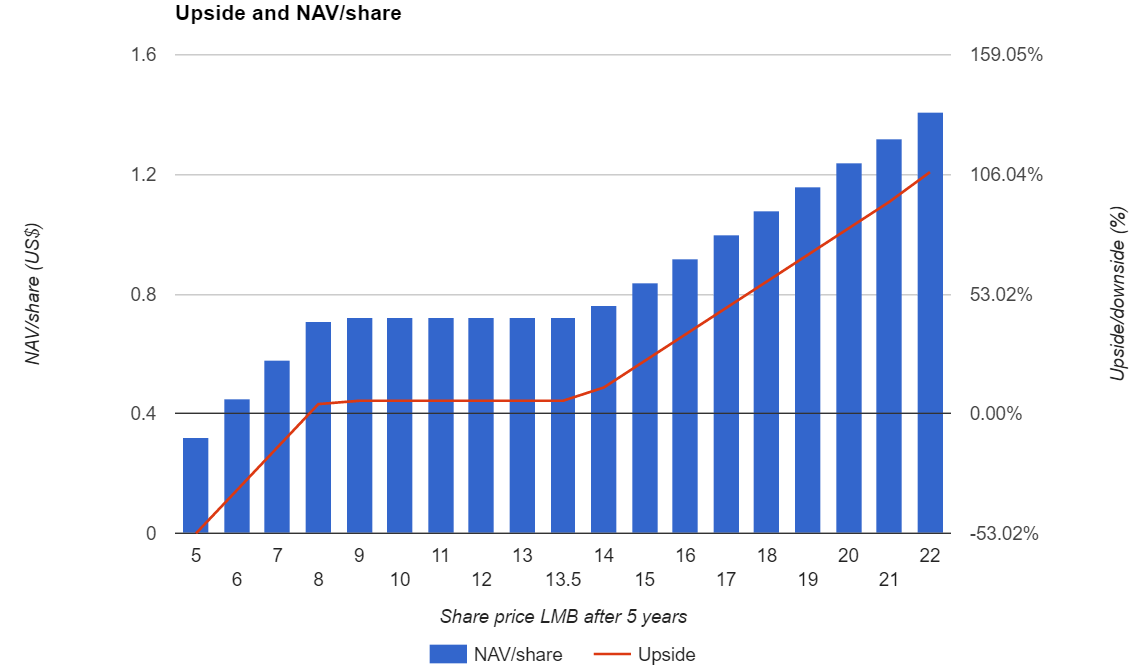 This payoff diagram makes it clear that despite the small discount to NAV it is still possible to make a good case for an investment in Itasca Capital since the payoff diagram is superior to a investment in Limbach itself. As long as the stock doesn’t drop more than 40% this investment might still make a little bit of money while there is leverage to the upside at the same time. If the stock goes from $13.50 to $22 you make 63% while with this investment you stand to make 107%. That sounds relatively good to me!

And there is more good news: Itasca Capital has $20 million in NOLs that expire between 2026 and 2036. To make use of these the company would need to acquire a profitable operating business for which it doesn’t have money at the moment, but it might be able to do this though when 1347 LLC returns the capital that is now tied up in Limbach. It’s worth more than zero.

Is Itasca a good deal? I don’t think it’s a bad investment at current prices, but certainly not great either. It has some (small) costs at the company level and it’s very illiquid, so it deserves to trade a bit at a discount to the underlying value of Limbach. Usually I don’t agree with the size of the discount that the market places on holding companies, and here it might also be a bit high. It’s hard to pinpoint the exact number, but I guess it’s around 20%. Not high enough for me to get interested in buying shares.

Author has no position in Itasca Capital or Limbach Holdings.