In October I wrote about Mota-Engil Africa as a potential interesting special situation because the company had launched a tender offer for all shares outstanding while the stock continued to trade at a relative big 5% discount. Today the company declared the self-tender unconditional and that payment for the shares is expected to occur on or before 9 December. This translates to a pretty awesome IRR of more than 50% while I thought that the transaction would be near riskless. Of course, the fact that the deal was completed without problems doesn’t prove that this was the case, but it does make it a bit more probable that I was right :).

Last year I did a small post on Mota-Engil Africa when it debuted on the Dutch stock exchange. While I never had any intention of investing in the stock I thought it was interesting because it is a good comparable to Conduril, (still) one of my biggest positions. Since getting a listing less than a year ago the stock price of Mota-Engil Africa has languished, hitting a low of €3.40 compared to an IPO opening price of €11.50.

The company has therefore decided that the listing in Amsterdam is a failed experiment and is offering to repurchase all shares at €6.1235. Mota-Engil SGPS SA (MESGPS), the largest shareholder slash parent company of Mota-Engil Africa is not going to tender their shares. With Mota-Engil Africa currently trading at €5.82 you can make a 5.2% absolute return when the transaction closes. The company will hold a shareholder meeting on 23 November and intends to complete the tender before the end of the year.

The €6.1235 offer is significantly above the €3.77 price the shares traded at the day before it was made public, and because MESGPS owns 82% of Mota-Engil Africa shareholder approval shouldn’t be a problem. In addition to this the deal is also supported by the second large shareholder with a 13% stake. This shareholder is going to exchange its stake for newly issued shares in MESGPS, so what remains is a float of just 5% that needs to be bought out. Effectively it’s a very small deal that shouldn’t hit any obstacles. The reason for the relative big spread is most likely the result of the low liquidity of Mota-Engil Africa. But who cares about liquidity when you can tender your shares in roughly two months time? I don’t. 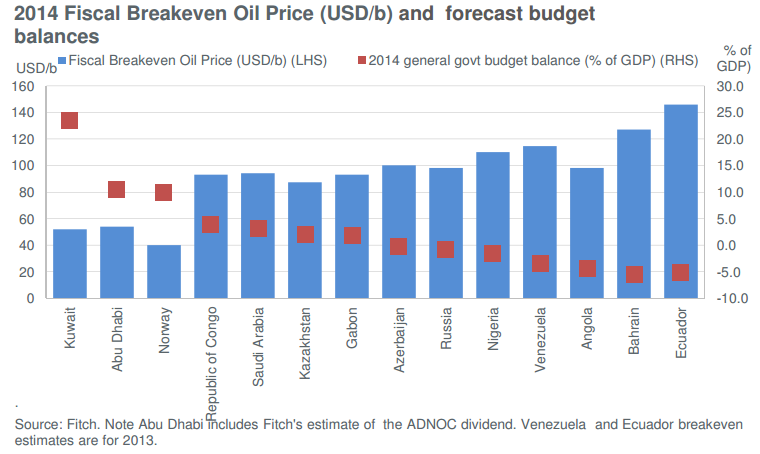 Last week Mota-Engil listed the shares of its African subsidiary on the Euronext stock exchange in Amsterdam. The company cancelled an IPO in London earlier this year and has now spun off 20% of the African subsidiary to shareholders. Mota-Engil wanted to IPO a part of the subsidiary at a price between €11.50 and €14.50. After opening at ~€11.50 last week the stock is now trading a bit below this range at €10.50 giving it a €1 billion market capitalization. 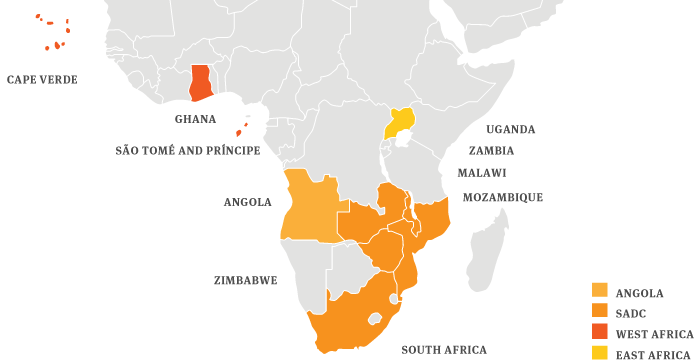 Both companies are big in Angola. Angola accounted for more than 50% of Mota-Engil Africa’s revenue in 2013 and Conduril is getting a similar percentage of its revenue from Angola. Conduril is also active in Zambia, Malawi, Mozambique and Cape Verde. Mota-Engil Africa is a lot bigger than Conduril though. They don’t even mention the company as a competitor in the listing prospectus when discussing the competitive landscape in Angola:

The Angolan construction industry had 44 major international contractors in 2011, however the industry is dominated by companies from Portugal, Brazil and China. Portuguese and Brazilian companies (or companies with ties to Portugal and Brazil) have leveraged strong cultural ties to build an established presence in the country with the Group, Teixeira Duarte, Somague Engenharia and Soares de Costa from Portugal and Odebrecht and Camargo Correa from Brazil winning the majority of new projects up for tender. In respect of Chinese firms, the model is slightly different, where China has acquired Angolan resources in exchange for infrastructure investment. Furthermore, extensive credit lines have been extended to Angola, although these are specifically to fund projects built by Chinese companies. As of 2011, there were 22 Chinese construction companies present in Angola.

It also looks like Mota-Engil Africa will be able to continue its fast growth in the near term since they have been awarded a project worth US$3.5 billion in Cameroon (conditional upon financing being secured). Their biggest contract is currently the almost completed Malawi Nacala Corridor Railway Corridor that is worth €691 million. Because of the growth difference Mota-Engil Africa should trade at a premium compared to Conduril. But this much? 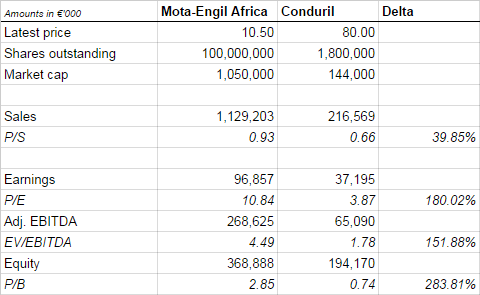 I don’t think so. A big project is nice for Mota-Engil, but it’s probably not sustainable growth since it will probably be extremely difficult to replace their backlog once it’s completed. With a P/E-ratio of 10.84 the market is presumably also not expecting growth miracles from Mota-Engil Africa. So it should be a reasonable comparable, and possibly undervalued itself given where it is trading compared to the proposed IPO range and the relative low P/E-ratio given its growth.