One of the cheapest Italian real estate investment funds is Fondo Alpha that is managed IDeA FIMIT SGR, one of the biggest players in this space with a total of 5 funds that are listed on the Italian stock exchange. Besides Fonda Alpha, they also manage Fondo Beta, Fondo Delta, Atlantic 1 and Atlantic 2. Fondo Alpha and Delta are the only two trading at a significant discount to NAV though. Fondo Alpha has an official expiry date of Jun 27, 2030 which is so far in the future that I almost immediately dropped the fund from my research list, but that would have been a bit premature since the fund has as stated goal an orderly liquidation by the end of December 2019. That’s something I can work with, and as visible it’s pretty high on my list that is based on the unleveraged discount to appraised property values:

Compared to the other funds Fondo Alpha looks pretty decent when looking at the high-level statistics. Occupancy isn’t very high at 64%, but even at this low occupancy level the properties are valued at a 6.4% gross yield and there is a minimal amount of leverage which implies that investors are effectively buying them at a 17.5% yield thanks to the 65% discount to NAV that the fund is trading at. Of course, when you start to dive a bit deeper you start to encounter the ugly sides of the story, but that is to be expected: otherwise it wouldn’t be trading at a 65% discount. As far as I could figure it out the fund has basically two problems:

In the 2014 annual report the fund provides an overview of their property portfolio that I have replicated below after throwing it through Google Translate. Far from perfect, but it should be good enough to understand the important stuff:

As visible the government has mostly short-term leases while the other lessees have lease terms between 3 and 7 years. Based on property values 43.5% of the portfolio has leases that expire within one year. These properties are occupied by various government entities and represent 56% of rental income. The other half of the portfolio (ignoring unoccupied buildings) have longer term leases with an average duration around 4 years. While a 64% occupancy figure is of course not very good they were at least able to replace most of the leases that expired in 2014. Google Translate once again (emphasis mine):

As of December 31, 2014, sixty-five rental locations are present (leases and severance of employment), of which fifty-conductors related to private and twelve governments. During the year 2014 there has been a decrease of five rental locations as were signed nine new leases and simultaneously it ceased fourteen. The recesses have occurred as a result of communications in relation to both the serious reasons, that the course of the natural expiration of the contracts. They are also being finalized some negotiations aimed at the signing of four new contracts with private and public conductors.

The amount for the year 2014 of the royalties, bonuses employment and compensation by way of compensation to the Fund recognized by some wires that were contested the serious reasons legitimizing the exercise of the right of early termination, total 24 677. 490 euro, whose 64.26% is attributable to the Public Administration. The above-mentioned figure shows a decrease of 6.54% compared to the same information of 2013, equal to 26,405,521 Euros.

As already mentioned the fund has trouble collecting the money that it is owed. This wouldn’t be a surprise if you have a bunch of struggling companies as lessees, but apparently the Italian government isn’t a lot better since they represent the majority of overdue receivables:

The fund already has a provision of almost €5 million for bad debts. If I understand the following correctly the fund seems to have a successful track record with respect to collecting payments through the juridical system:

Continues the business of credit management promoted by the SGR, through the systematic use of coercive recovery of loans from the Fund, including by the courts. Relating to these activities of judicial recovery, it is noted that, as of December 31, 2014, the total amount of loans to tenants, both belonging to the Public Administration that the conductors private, subject to the injunction amounts to 54,056,009 Euros. Of this amount are recovered at the same date approximately 45,121,850 Euros, equal to ‘83.47% of the amount subject to legal action.

The downside of collecting payments through the juridical system is that the company incurs high costs. Paying a management fee of 1.13% sounds doable to me, especially since the fund should be liquidated in a couple of years, but mainly thanks to attorney and court costs the total expense ratio for 2012 was a whopping 5.10%: 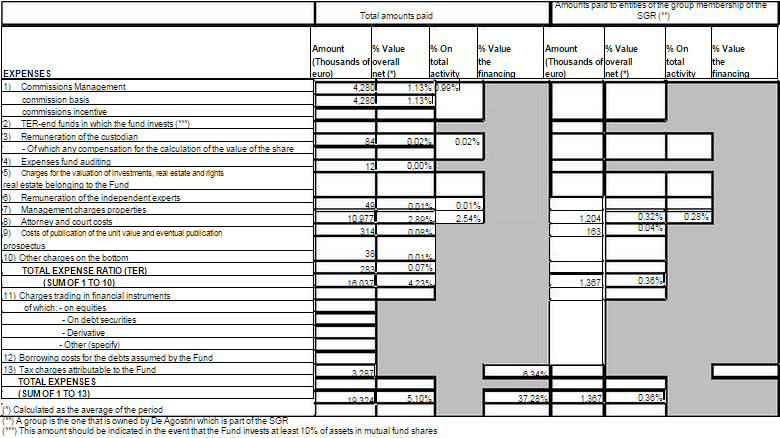 I usually don’t discuss taxes on my blog because my tax situation is probably not the same as yours, and in most cases I don’t need to worry about them because I’m effectively tax-exempt. This is not the case for Fondo Alpha and other Italian REIFs though since normal dividends are taxed at a 26% rate. Luckily – as far as I understand – dividends that are a return of capital aren’t taxed, but because Fondo’s Alpha NAV is €3679 while the par value of the shares is €2500 there is potentially a big tax liability. I don’t think it really matters though since you can buy the stock at €1254. Would be great news if liquidation payments would exceed €2500/share!

Conclusion (and other ramblings)

Fundo Alpha appears to be a mediocre real estate fund: they certainly don’t own prime property with blue-chip names as tenants. At the same time, I don’t think they are disastrously horrible, and that’s what the market is implying. With the fund trading at a 65% discount to NAV, while employing almost no leverage I think there is a ton of room for unfavorable events while still realizing a satisfactory return.

There are probably going to be properties that require further write-downs, there are probably going to be receivables that they can’t collect, you will incur management costs and other operating expenses in the meantime while it is unclear if they can liquidate before 31 December 2019. It isn’t pretty! But the current discount is HUGE and they should generate a decent amount of rental income in the meantime as well. I also expect that they will be able to monetize some part of the portfolio in the next couple of years, and some early return of capital should do wonders for the internal rate of return of this investment.

As a foreign investor in Italy, who doesn’t speak the language, I would never buy a huge position in a single fund because I’m probably at an informational disadvantage compared to the locals. At the same time, I also think this is the kind of market structure that can create opportunities. There is probably not a lot of foreign capital interested in researching illiquid Italian funds that are targeted at retail investors while those retail investors might not be willing to sink another euro in a bunch of funds that have returned approximately zero the last decade.

To be honest: there was actually a bit of foreign capital interested in this market last year. Blackstone launched a tender offer to acquire 50% + 1 share of Fondo Atlantic 1. In the end, they dropped the requirement to get a majority stake and bought 39.5% of the share capital while increasing the offer price in multiple steps from an initial €295.55/share to €335/share. The shares are now trading at €384 which represents a discount of just 19% to NAV.

A second tender offer was launched by Capstone Equities Capital for 33% of the shares of Europa Immobiliare N1. The tender offer was for €710/share, but the tender offer was not successful since just a handful of shares were tendered. Shares are currently trading at €716. The fairness opinion that was given by PWC as a response to the tender offer was, in my opinion, very interesting since it was not only based on a simple NAV evaluation, but also a DDM with a discount rate of 10 and 11 percent. Big Google Translate quote:

After analyzing the information contained in the documents made available by the Bidders, the asset management company, in respect of the management strategies and in line with the findings contained in the reasoned opinion of PWC, has reputedly NOT REASONABLE the Consideration proposed by the Bidders, as the same presents a discount of 54.5% to NAV at 30 June 2014 and does not appear in line with the findings of the DDM applied to the Business Plan 2014-2017.

In the light of the opinion expressed by PWC:

Given the high discount rate used in their DDM valuation I think that the result is probably reasonable and *surprise, surprise* their result coincides with my view. These funds deserve to trade at a 20%+, and perhaps even a 30%+, discount. But if you buy them at a 50%+ discount you get a great deal as long as you have the patience to wait (at least) a couple of years.