Just before hitting the three year deadline after which Albertsons would be required to pay CVR holders fair value for their stake in Casa Ley they announced that it was sold for approximately US$345 million. The transaction is scheduled to close by February 28, and CVR holders are expected to receive a payout between 87 to 90 cents per CVR six weeks later. It’s a slightly disappointing result since the CVR was valued at $1.0149 at the time of the merger. Albertson is quick to point out that since then the Mexican peso depreciated 20% against the dollar, but on the other hand we have been in a raging bull market for three years as well. Not the best outcome possible, but still pretty decent I think. Now that we know how big the final payout will be we can calculate what kind of return my first ever CVR-trade generated:

As you can see the trade generated a return of 23% over a more than three year time period which is obviously pretty good, although I believe this understates its profitability. I basically paid 33 cents in 2015 to get paid 90 cents three years later. Looking at it from that perspective the internal rate of return sounds low, but that has to do with the large amount of capital that needed to be tied up in this trade for a week. But thanks to a cheap margin loan it was almost free capital, and accounting for this leverage the internal rate of return would be way higher.

More than two years ago, in January 2015, I participated in my first merger arbitrage deal that had a contingent value right (actually two) as part of the payment. Since then I have participated in more deals with CVRs, but since the payment is usually contingent on events pretty far in the future I haven’t got a single cent from them so far. That’s however going to change soon since Albertsons announced that the first CVR will pay 1.7 cents with a possible additional 0.03 cents coming later. It’s a very insignificant amount (adding just 0.0156% to this years return), and also a bit disappointing since the CVR was valued at $0.0488/share at the time of the merger. Nevertheless, it’s fun to finally get a little bit of money from my collection of CVRs.

The real action will be next year when the far more important CVR connected to the value of Casa Ley will expire. That one was valued at $1.0149/share at the time of the deal, and could have a more material positive impact on my portfolio :).

Albertsons and Safeway announced today that they have completed the merger transaction. This wasn’t exactly a surprise after they received clearance from the FTC earlier this week. What is very interesting is that the press release contains valuations for both CVRs since that is required for tax reporting purposes. An estimated value of $1/share for Casa Ley isn’t bad:

Also nice is that the timings of the payments for PDC have been moved forward a little bit while the total amount has been increased slightly. It’s just a small difference, but probably enough to raise the IRR of the merger arb with a few percentage points.

With respect to PDC, both the initial cash distribution ($2.412 per share) and the total estimated asset value including the CVR ($2.461 per share) have increased slightly over the estimated values set forth in Safeway’s December 23, 2014 press release announcing the sale of PDC. Those earlier estimates were $2.38 per share and $2.45 per share, respectively.

One of the great things about running a blog is that you almost always receive useful feedback on your idea’s. My write-up on Safeway was for example lacking a bit in the valuation of the Casa Ley stake, but the spreadsheet shared by “rowerburn” corrects this omission. Since the SEC filings of Safeway only provide information on the earnings and the book value of their Casa Ley stake an in-depth valuation is impossible, but it is enough for a rough ballpark figure:

I think that the company will be liable for taxes when their stake is sold for more than book value ($0.89/share) so that would slightly reduce the value of the CVRs if it is sold at an earnings multiple above 17.5x. Since that seems to be pretty high I think that is going to be unlikely and that taxes aren’t a major concern. If Casa Ley is sold for $0.75/share the annualized IRR will be 28.7% if it takes the full three years to sell their stake:

Of course, when it takes longer to sell Casa Ley the business has more time to grow and generate earnings. So perhaps we should expect a higher value the longer a sale takes. On the other hand, that would probably mean that there is little interest in their Casa Ley stake. But since CVR holders will receive fair value as determined by an international investment bank if Casa Ley isn’t sold before the deadline that might not be a problem? 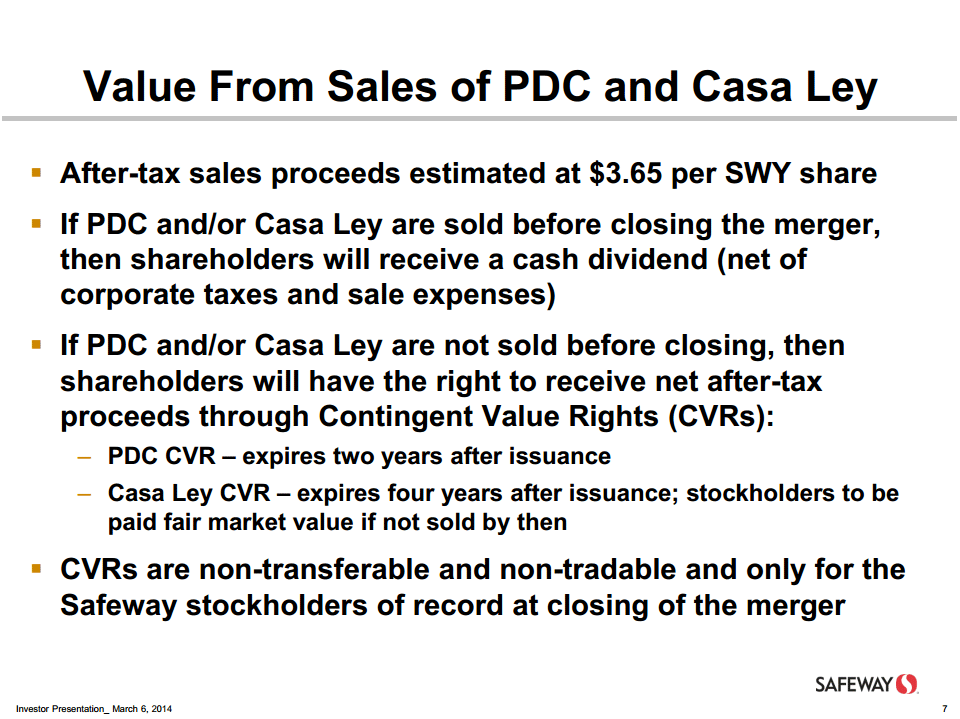