Last year Tejoori announced that it would liquidate. With the stock trading around $0.50/share while I estimated a NAV/share around $0.62/share I thought it was a good bet. In the end that estimate proved a tiny bit too optimistic since I got paid $0.59892/share, but I guess an unfavorable currency exchange rate is partly to blame. The liquidation distribution was paid in United Arab Emirates Dirham, and I have seen other shareholders reporting receiving a slightly higher payout in US dollars. But I’m happy to have gotten my money…

Because the company cancelled their electronic trading facility before making the liquidation distribution receiving the liquidation payout was a bit of a messy process. The depository that my broker used to keep my shares had to communicate with the liquidators in the British Virgin Islands to make sure that the money got transferred manually from Abu Dhabi to their bank account. Since that’s probably a very exceptional thing to happen, I can see how that can go wrong somewhere along the lines if someone, somewhere doesn’t fill-in the right paperwork. I like deals like this where you can’t be totally sure that everything will work out because of the paperwork, although in this case it sucked that you couldn’t do anything about that yourself. But it’s a risk that is totally uncorrelated with the market, and although at some point I will probably participate in something that will not workout, I think that as long as you get paid a big spread the overall end-result will be more than satisfactory. This one certainly was!

No position in Tejoori anymore

In the beginnen of this year I bought a small low-conviction position in Tejoori. The company had substantially sold all their assets at that point in time, and my guess was that it would soon fully liquidate. Tejoori took their sweet time though on making this decision, and if you would have asked me in the past couple of months if I would have wished I never invested in the company I would have said yes. “Luckily” trading stock on the SEAQ segment of the AIM market isn’t possible without incurring huge frictional costs, so I never bought or sold any shares after establishing my initial position. Last week the company announced that it would fully liquidate and return to shareholders its cash balance of approximately $17.6 million.

The company doesn’t provide an estimate of liquidation proceeds, and while knowing the cash balance is nice it doesn’t tell us how many liabilities are remaining on the balance sheet and how much costs will be incurred to finalize the liquidation. However, I suspect that there are no meaningful liabilities left. At the end of 2016 the company had $19.0 million in cash (and Wakala deposits) with total liabilities of $1.4 million for a net equity of $17.6 million. Since the company has a minimal amount of cash burn (less than $200,000 annually) I would conclude that most liabilities should have been extinguished given that the remaining cash balance is now close to the previous net equity number.

With the stock trading at $0.50/share the potential upside is significant. If we would budget half a million to wind down the company, net assets value per share would be $0.62 for an upside potential of 23.5%. For a liquidation that’s a pretty big spread, and I couldn’t resist increasing my position. At the same time I’m still not willing to bet too big on this. I deeply distrust the average AIM listed company, and so far Tejoori hasn’t done a lot to stand out positively.

I also wonder how the liquidation will be executed. The company is planning to hold a vote on delisting the company later this month, followed by a second vote at a date to be determined to authorize the liquidation. There should be no problem with passing the first vote. They need a 75% majority to approve it, but only from the votes present. If 51% of the shares vote that is sufficient, and if this threshold isn’t reached the meeting is delayed by one day and the threshold is lowered to 33%. Management owns 16.42% of the outstanding shares, and will vote in favor of the delisting, so this really shouldn’t be a problem.

After the delisting the company is planning to cancel their CREST facility (electronic depository), and I’m not sure what exactly the impact is of this move. I own my stock through CREST, so I’m wondering how liquidation distributions will be made if this facility is cancelled. Secondly I’m wondering if this will impact the second vote required for starting the liquidation. Shareholders who own shares in uncertificated form also vote through the CREST system.

Earlier this year I bought a small position in Tejoori. After selling substantially all its assets the company consists solely of cash, and cash like instruments. My thesis at the time was that the Tejoori would eventually fully liquidate, and distribute the cash to shareholders. Since then nothing has really happened, and the company has remained noncommittal in distributing the cash. In the latest interim report the same language as in the previous report was used that promised that there is the intention “to return to shareholders a certain proportion of the cash generated from the sale of the Arjan Plots”.

Locus Capital has decided that things have taken long enough, and is trying to start an activist campaign with the intention to get management to return all shareholder capital. In order to get this kick-started they have created a Google Sheet to collect the information of fellow shareholders who have a similar goal. I suggest you fill it out here if you are a shareholder. 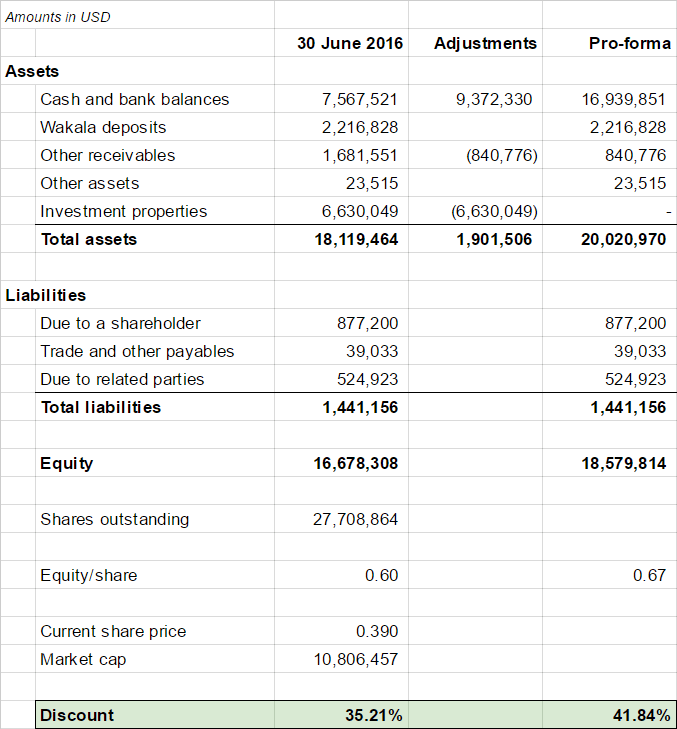