A bit more than two years ago I wrote about my decision to take a position in XPEL, Inc. (NASDAQ:XPEL), calling it anything but a classic value stock. At the time it was trading at a 37.1 P/E ratio and a 10.0x P/B ratio, making some readers question if I was suffering from style drift. I don’t think these comments were particularly surprising given that I often blog about classic value stocks such as net-nets. But my style has always been one of being willing to buy anything at the right price. Sometimes that is one of the most ugliest stock you can imagine, while other times its a rapidly growing company that is just too cheap.

In my initial write-up I posted a simple valuation model, looking forward two years to see how the financials of the company could look like if it would continue its trajectory of high-growth. I should have made this post a couple of months ago when XPEL released its results for the second quarter, but didn’t think about it, so instead you will get a comparison to numbers that are actually moved two years and one quarter in the future. Putting the current numbers side-by-side with my model from two years ago looks like this: 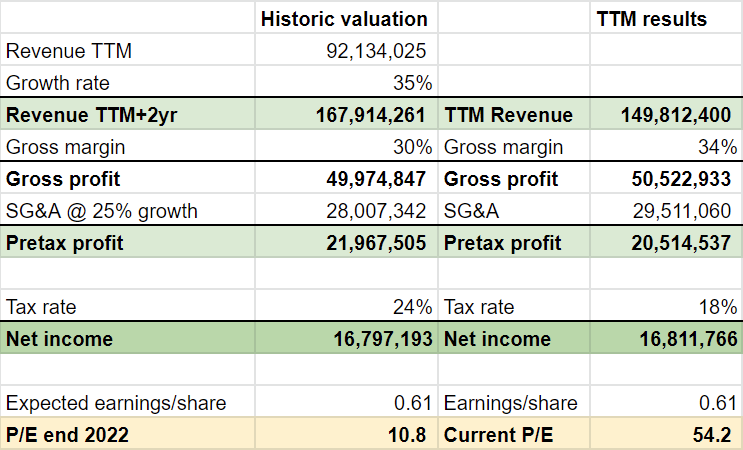 As should be expected, reality never fully matches a model, but I think it is actually pretty amazing how close this very simple model got. Revenue turned out to be a bit lower while gross margins turned out to be higher. But in the end, my expected earnings/share number is to the cent identical with the actual results. With the caveat of course that these results were achieved three months later than the model predicted, but also with the Corona crisis happening.

Of course, thanks to its continued growth, the stock is now even more expensive than it was two years ago. Instead of trading at a 37x P/E ratio it is now trading at a whopping 54x. So there has been some multiple expansion, but most of the gains that the stock made the past years are not because of that. The multiple went up 46% while the stock went up 400%, from $6.54/share to $33/share. Given that there are no signs of revenue and earnings growth slowing down, I think we can make a pretty similar model as two years ago that once again makes the stock look pretty decently priced. A bit more expensive than two years ago obviously, but not by a whole lot. I do expect that the multiple will contract in the future, but the growth in earnings should be able to counteract that and then some. But I don’t think the stock will be able to repeat the performance of the past two years. At least, that is not my base case.